What happens when you take a favorite childhood toy, popular movie franchises, and video games? You get brilliance. Lego Harry Potter: Years 1-4 is the newest installment in this formula of games, and after spending some time hands on, I can assure you it is one of the best yet. The Lego games have always delivered a strong “sit down and have fun” atmosphere. Where some games are enjoyable through the sense of accomplishment you get after defeating the hardest enemies to ever grace the screen, Lego Harry Potter rewards you with whimsical moments of smashing lego creations to pieces. Anyone who has touched a lego set in their life can appreciate seeing the lego creations being virtually destroyed and contorted.

The game itself follows the storyline of the first 4 Harry Potter books, bridging together the story with cutscenes where lego characters pantomime key scenes from the story, usually in a more comical way than originally written. After these cutscenes you are tossed into a level that corresponds with that part of the story, and that’s where the fun begins. While playing through these levels, there are multitudes of set pieces you can interact with. By casting the spell Wingardium Leviosa (levitation charm), you can shake, rattle and explode studs, the lego currency, out of candlesticks, tables, plants, and sometimes even people. The studs act as a strong game mechanic, because they unlock things from clothing options to secret characters, and there are thousands of them to collect each level. 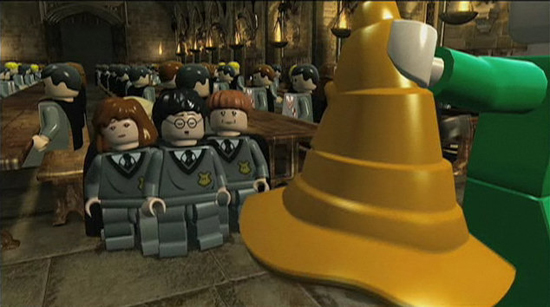 Scenes from the game, performed by LEGOs

Aside from the basic game mechanic, each of the over 100 playable characters have slightly different abilities they can use. Throughout the game our wizardly characters like Harry, Ron, and Hermione, will learn spells taken straight from the novels which they can use to manipulate the world. There are also characters who have different abilities, like Hagrids brute strength, Fangs ability to dig, and Ron’s pet rat Scabbers ability to fit into small places. The first time you play through a level, you will be provided with characters who have apt abilities to allow you to finish, but once you unlock the free play mode, you can bring in whatever characters you want, allowing you to access parts of the map that were impossible to reach before. 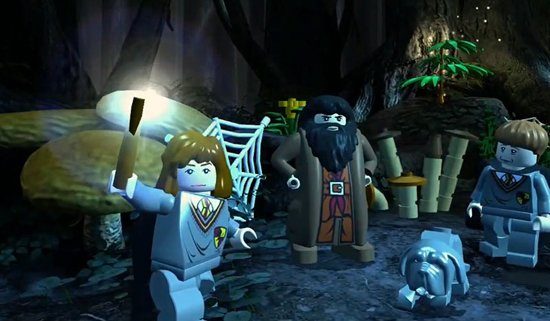 Play as a wide cast of characters

The game may sound like a stroll through the park because of unlimited continues and generally docile enemies, but its not really a game that focuses too hard on combat, it’s about exploration, and puzzles. There are now moments in this lego world where you will have to find and then re-arrange lego blocks to form staircases, as well as using specific magical spells on the environment to summon up ladders, bridges, or completely reform the terrain. There was even a moment in the demo when I got stuck because I didn’t know I had to destroy the vines that were wrapped around a large block that ended up being a switch to operate a bridge. There are also hidden items strewn about the levels, as well as the reward of collecting a threshold number of studs per level.

Last but not least, there will be a builder mode. Once unlocked by collecting enough golden bricks (from completing levels), you will have the opportunity to create and play inside your own Harry Potter themed lego worlds. A nice added bonus that I have not seen in the other Lego games.

So if you are a Lego fan, Harry Potter fan, or just looking to try something new, look for Lego Harry Potter: Years 1-4 coming July 29th, for the 360, ps3, Wii, PSP, and Nintendo DS.