With the Playstation 2 as their primary concern, and the threat of Microsoft’s new Xbox on the horizon, Nintendo had to really impress with the Gamecube back in 2001. They never quite managed to shake the family gaming image they built up with their previous systems, missing out on the increasing adult gaming audience. The lack of a Mario title at launch also hurt the GC’s debut. Instead we were given Luigi’s Mansion, a game that was a far-cry from the more famous Mario brother and his antics. Many were disappointed by this, leaving Luigi’s Mansion as little more than a bad taste in peoples’ mouths. 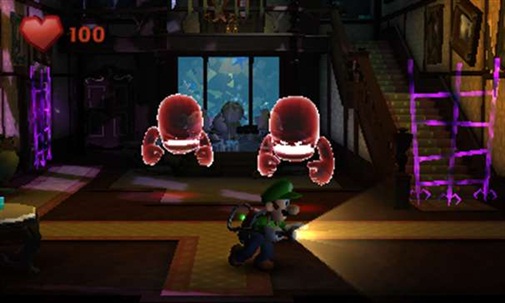 The fate Luigi’s Mansion was dealt wasn’t fair though, and justice has been served with the release of Luigi’s Mansion 2. It corrects the design and lifespan issues of the original and, now free from the shackles of a console launch, Luigi’s adventure is free to breath. It leads to an impressive title that comes as one of the first essential 3DS exclusives outside of the core Mario games.

The plot is little more than a vehicle for the action, with professor E. Gadd calling Luigi back to the mansion to tackle the ghost menace once more. The ghost-pacifying Dark Moon above Evershade valley has mysteriously broken into shards that are scattered across the valley, and Luigi needs to find them all to restore order. It won’t win awards, but it opens up the locations of the game far more than the solus mansion of the original. They all revolve around the same gothic themes, but water-powered towers and decrepit clock factories grant the series a variety you never knew it could have. 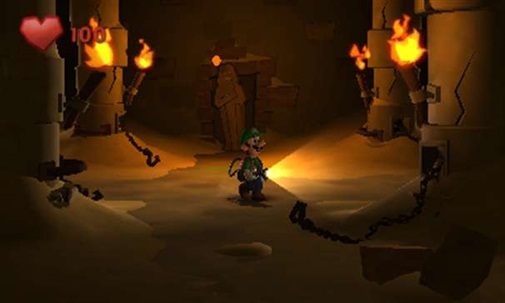 The virtues of the levels are plentiful though. Beyond sheer variety, each individual stage is lovingly crafted. Every nook and cranny is a joy to explore, with a fantastic artistic direction bolstering a multitude of secrets, alternate routes and collectibles. Pretty much everything hides some form of currency that goes towards powering up your gear, and the promise of unique gems and hidden Boos proves difficult to resist.

Though the levels are all expansive and rewarding, their structure and the subsequent pacing of the game is something of a mixed bag. Rather than operating as an open map, each environment is divided into several smaller stages that lasts a little over ten minutes on average. Though this piecemeal approach gives the game a tighter focus and the shorter bursts of gameplay that benefit handheld titles, it robs LM2 of the Metroidvania style exploration it so clearly demands.

Regardless of how you feel about the level structure, there is still a definite joy in exploring that can’t be denied. Luigi rocks up with plenty of tools for exploration, from his all purpose ghost-absorbing vaccum cleaner to a powered torch and a darklight capable of uncovering illusions and other paranormal activity. A lot is squeezed out of a fairly limited set of gear, to the point where puzzles become about cleverly using what you have, rather than just scrambling for yet another piece of kit/upgrade. Bosses follow a similar pattern, taking the form of extended puzzles rather than all-out action. This cerebral focus pays off though, as the bosses are always a highlight. 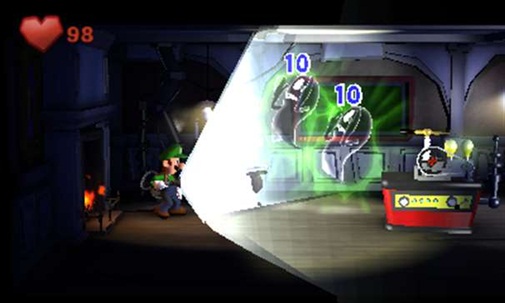 Controlling Luigi and his contraptions is fairly simple. The scheme make sense for a single analogue stick setup, and you’ll be stunning and capturing ghosts like a pro in no time. Aiming isn’t always as snappy as you’d like though. Charging up your vacuum pack/torch locks Luigi in the direction he’s facing and, though you can still use the analogue nub to alter his orientation, it sometimes winds up being a bit fiddly in the heat of combat.

The combat itself isn’t necessarily bad, but it’s the puzzles and explorations that are the game’s forte. What a shame then that the multiplayer shifts its focus away from them. The multiplayer has you progressing through a set number of levels in the Thrill Tower with up to three local or online players. The objectives for each floor are little more than finding a certain number of items or clearing the floor of all ghosts based on your selected game mode and, though the levels are randomised, it all becomes tiresome quite quickly. At no point is there any bad design going on. The mechanics and netcode are solid and it all works well, but it’s devoid of the same imagination and charm that is present in the main game. Criticisms aside, kudos goes to the inclusion of download play, allowing you to play with your buddies even if only one of you has a copy of the game. 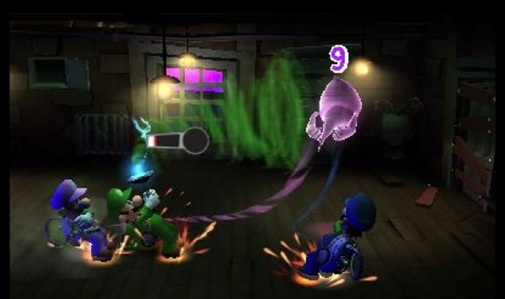 Whatever mode you delve into, there’s no denying that Luigi’s Mansion 2 is a visual delight. The evocative locales are brought to life vividly and the animations on the leading man himself are some of the best to grace a handheld title. From his casual stroll to the clumsy arm-flailing that accompanies a rapid descent, it’s always a pleasure to navigate your surroundings as the underestimated Mario brother. The gorgeous textures and animations are accompanied by a catchy soundtrack and the suspiciously emotive vocal work that goes behind Luigi’s non-vocal sound bites. The entirety of the presentation demonstrates the playfulness of a first party Nintendo title but, without the company’s history putting pressure on them, developer Next Level Games have been able to take the charming Mario aesthetic to a whole new level. It looks good, sound good and, ultimately, is good.

Two years into the 3DS’ console cycle and we’re finally starting to get compelling reasons to keep our system at the ready. Though the Mario games have been a real incentive to stay glued to our 3D screens, their classic platforming gameplay has lacked the depth that the system needs in its exclusives. It now has that depth and quality in the form of Luigi’s Mansion 2. Though the multiplayer is disappointing and the level structure hinders the game’s grand environments to an extent, LM2 is still a necessity for anyone with a 3DS.

Level structures are questionable, Perspective can get confusing, Aiming can be a problem, Multiplayer is unimaginative

One of the first essential 3DS exclusive adventure games, Luigi's Mansion 2 corrects almost all of the mistakes of the Gamecube original, though the multiplayer and pacing aren't quite how you'd expect.

A copy of this game was provided by developer/publisher for review purposes. Click here to know more about our Reviews Policy.
Tagged With: 3DS, luigi's mansion, luigi's mansion 2, Luigi's Mansion: Dark Moon, Next Level Games, Nintendo