A platform adventure like so many other movie tie-ins.

When you’ve done reviews for a while, it’s often not the big blockbusters and polished masterpieces you look forward to. Whilst it’s fun to play the AAA games, writing on the truly awful games is often a smoother experience, as it can be challenging to remain impartial about something you truly like. The absolute worst case scenario then is the middle ground game. The 5-7 out of ten games are the most frustrating of all as, whilst the games aren’t bad enough to afford creative and lavishly humorous metaphors in the write up, they are absolutely no fun to play. Madagascar 3 is one such game, and it made me die a little bit inside. 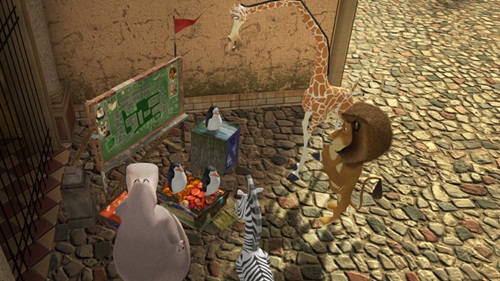 Most of the important characters from the movie show up, albeit in a more pixelated form.

The game follows the plot of the movie as always, with your favourite characters from the movie still trying to make their way back to New York, but they somehow get waylaid and start trying to run a circus across Europe. I’m hoping the story makes more sense in the actual film, as it’s not exactly clear what’s going on in the game’s narrative.

It sets up a story mode that involves Gloria, Marty, Alex and Melman travelling through various European cities with the circus troupe. Each level sees you take two of the main characters out to complete an objective/find a particular object, with all characters having different skills that you need in order to navigate each stage. You thus must swap between your two characters regularly to complete each level, an action that, whilst smooth and instantaneous, leads to some frustrating problems with the partner AI. It often fails to follow the lead character, and it has a tendency to lead your partner character off of ledges with alarming regularity. That said, the game allows you to bring a friend in for some split-screen cooperative action as an alternative. It’s drop in and drop out as well, a feature that is much appreciated. It can get a bit confusing guiding two characters around each level though as, despite a decent sense of scale in each stage, the route you need to take is often annoyingly obscure. 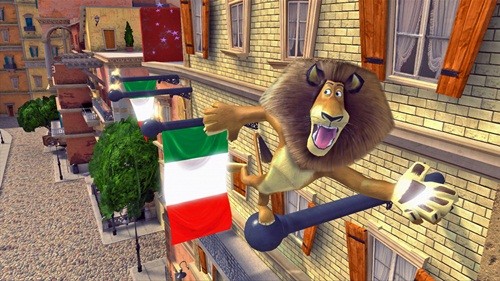 Don’t trust the happy looking lion! The platforming does not feel that fun or satisfying.

Whilst platforming and exploration make up the majority of the game, there is a mild element of espionage added by the need for your characters to avoid animal control officers. It’s a decent idea, but one that is foiled by the retarded enemy AI. Enemies fail to give chase about ninety percent of the time, and even the lowest of ledges will stop them in their tracks. This is only a problem if they actually detect you though, as all the characters have the ability to disguise themselves to reduce their chance of being seen. It’s another case of a decent concept with a rubbish execution, as their isn’t any real way of knowing when you’re in this stealth mode aside from your character donning a pair of glasses, and it also reduces your movement speed to the point of frustration. Combined with this is the inability to engage in particularly precise platforming and the unsatisfying and ambiguous jump heights, two cardinal sins that make the controls generally feel a bit stodgy.

Even with the few levels on offer in story mode, you can go back and play various missions again in the creatively named mission mode. It’s unknown who would want to do this though, as the main game is a rather monotonous affair even without replaying sections of it. Things are given a mild sense of variety by various circus themed mini-games that break up the repetition, but a lack of depth makes this element of the game a missed trick. The actual circus games are adequately enjoyable, but some of the earlier events seem thematically dull. Ticket selling? Really? How is that the go-to event for a circus themed game? It also doesn’t help that it’s just a visually uninspired QTE fest. There isn’t much substance to any of the events, but they’re a reasonable distraction, especially when you consider that they also support drop in and out co-op play. 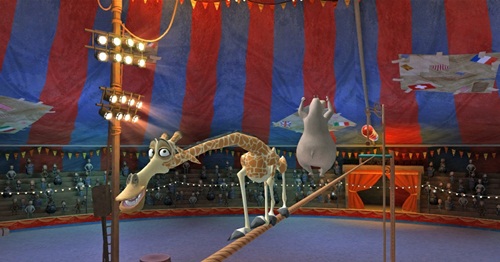 The circus games break up the monotony slightly, but they’re lacking in depth.

So in terms of gameplay we have what is, pretty much, the definition of uninspired, but the graphics must be better crafted, right? Well they aren’t. Considering the game is based on an animated film, you’d think the visuals would be more pleasing than they are. That’s not to say they are technically atrocious, but they just seem very bland. The smooth animations and vibrant colours of the film series become washed out and lifeless in the transition to home consoles. They’re the kind of visuals we may have considered high quality a decade ago, but now they just seem underwhelming.

Overall you have a game that does everything adequately, but fails to excel or excite in any area in any way. That said, it does a good job of translating the quirky characters and world of Madagascar 3 into game form so, whilst the average gamer will be able to pick more holes in the game’s mechanics than a slice of Edam, kids who loved the movie will probably get a bit of a kick out of playing as their favourite characters.

Four characters with different abilities, Levels have a good sense of scale, Mini-games offer variety, Drop in and out cooperative gameplay on all modes

Final Verdict:
MEDIOCRE
A platform adventure like so many other movie tie-ins, Madagascar manages to capture every single cliché of the badly made film crossover, all whilst achieving nothing original or new
A copy of this game was provided by Developer/Publisher/Distributor/PR Agency for review purposes. Click here to know more about our Reviews Policy.