The Madden franchise is a series we have come to love and hate every year.  The year is now 2010 and we have a brand new installment of our gridiron classic. This game was released on August 10, 2010 and sold thousands within the first few hours. Let’s take a look at the changes the year has given us.  Caution though; this game makes use of The Online Pass so don’t purchase this game pre-used, or you won’t be playing online unless you pay a fee of ten dollars. 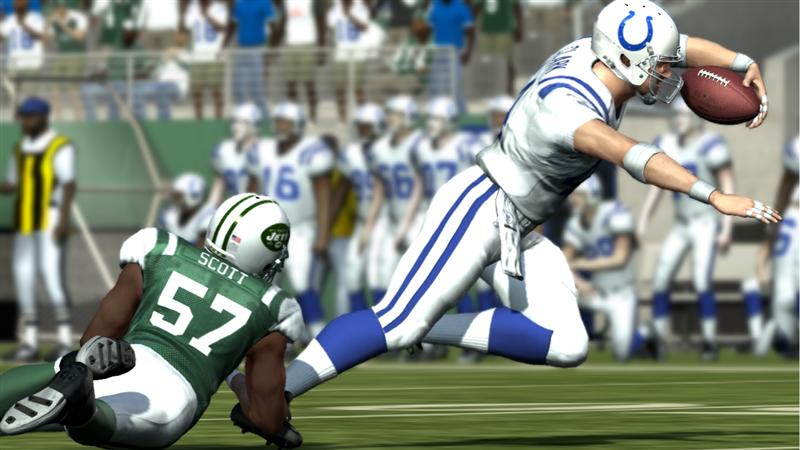 First off, we have the Animation System- and it’s more fluid than its predecessor by a long shot. For instance, if you have ever watched football, you will notice that players run in full stride with their heads down and not like the half witted  robots seen in previous Madden titles. The visuals themselves have been given a nice upgrade from a player detail perspective such as padding in the legs and torso portions of the body.  The stadiums themselves look very nice and a lot of work was put into their creation. We now have new sound effects and team fight songs. I also noticed that the colors were enhanced and it gives the atmosphere a bigger presence (although the crowd still looks like cardboard cutouts!). 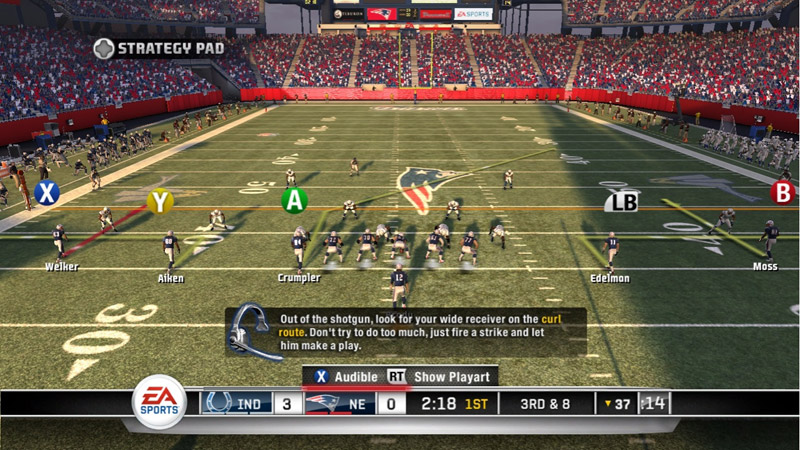 Continuing with the presentation, we have new announcers -well, at least one Gus Johnson, as any NFL fan should know of.  He brings a level of excitement to Madden that I have never seen before. Let’s say you’re running down the field, he will yell out down the sidelines! The same applies for broken tackles, touchdowns, spectacular catches and other moments of excitement. However Chris Collinsworth makes a return as well- he was not very well liked or received since last year. Yet he is back with his recycled catchphrases and his old time football stories. 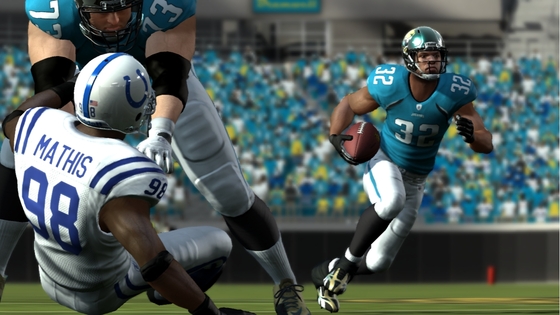 Let’s take a look at some on-the-field gameplay and what makes it great. First off, the game has been slowed down. This gives time for the play to develop so you can make your move. Say if you’re running the ball you will see where and when a possible hole may develop to rocket through. Now if your passing, it’s alot easier to identify a Receivers break point on the ball, you can also tell if the defense is playing man to man or zone coverage. 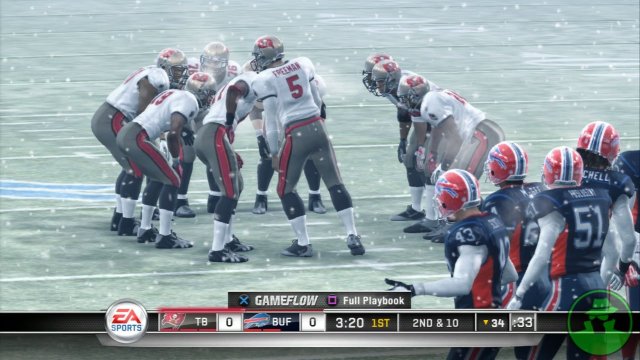 There are a lot of things that haven’t changed, gameplay wise, as well, such as defensive backs intercepting your pass when not looking at the ball (any Madden NFL player knows of what I speak and the horrors they have been put through).  Now for a huge gripe- the Strategy Pad. Using this to command your O and D Lines has never been more obnoxious. It requires tapping multiple times on the Directional Pad to get the desired outcome and remembering what it is what is near impossible. However a fix was made where you can use the previous installments system and it really is good to have it as back up, so fear not. 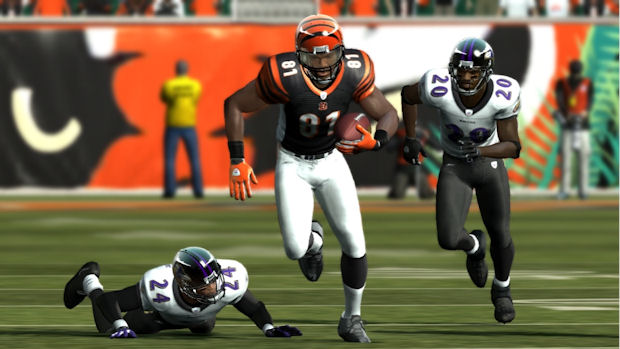 The new play calling system it has been revamped, and I hear it’s not well liked. However, we enjoyed as instead of killing the clock looking for plays, my Coach auto picks a play based on my yardage needed and situation based on time or timeouts left. You will hear him describe the plays through your Headset if alone and plugged in. Game-flow works well on offense, however on defense the system just does not work well at all. Your coach will pick plays that are mediocre at best- you will be burned alot, so that’s why we just picked our own plays while on defense.

One more big addition to the game that seems to be the most popular mode is Online Team Play. This mode is made for teamwork and people who like to communicate. You play as a team of three versus three you have the ability to be a receiver, running back or quarterback on offense. On the defensive side of the ball you can play the D-Line, Line Backers or Corner Backs. Now if you just can’t make up your mind you just pick any position. You will play a normal game just as you would in your Franchise or Play Now mode. The presentation stays the same and it is a very rewarding experience. Madden Ultimate team also makes a return and hardly any changes have been made it’s still very bland. Superstar Mode also makes its return once again no changes still the same old boring time.

Overall, Madden NFL 11 is great game. There are many features that will have you pleased and wanting more after your first game I would recommend this to any football fan looking for an authentic football experience.

Adds more 'realism' in its own sense. Adds co-op. Madden Moments has been added where you play last years craziest highlights.

Different controls have been made which could be a good thing. The games online franchise mode has not seen any changes and was never great to begin with in my opinion.

Final Verdict:
SUPERB
Madden NFL 11 continues to make the game more realistic feeling like your playing football and not a video game giving more options as well as adding co-op to the game. Gus Johnson continues to put work into his announcing. The game has some different controls which could be a good or bad thing depending on the player.
A copy of this game was provided by Developer/Publisher/Distributor/PR Agency for review purposes. Click here to know more about our Reviews Policy.