EA has released a new trailer for Madden NFL 23, which shows off the new gameplay features part of FieldSENSE. 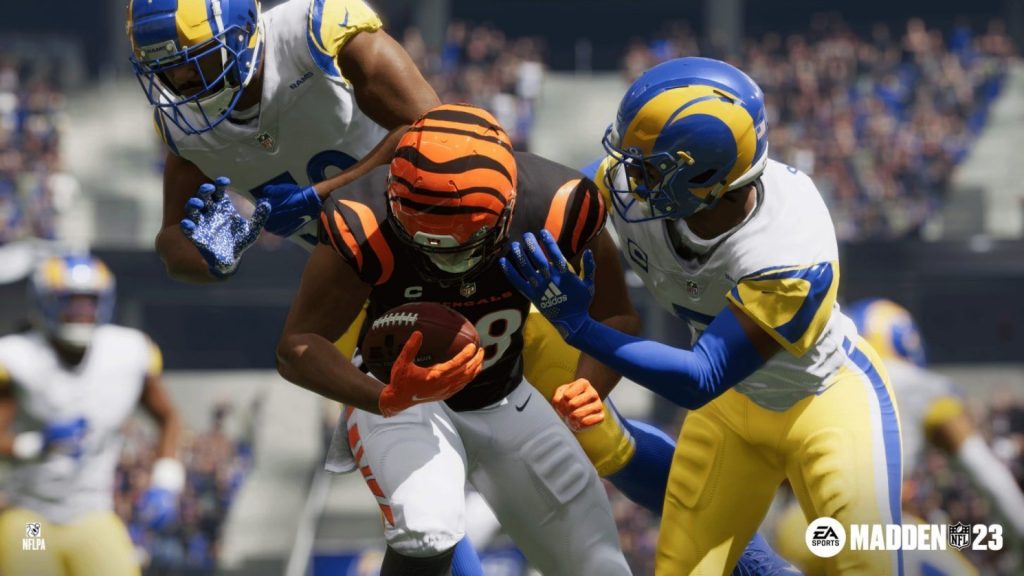 EA has released a new gameplay trailer for its upcoming Madden NFL 23. The trailer focuses on FieldSENSE, which is described in the trailer as an entirely new foundation for Madden NFL 23‘s gameplay.

The big feature behind FieldSENSE is new technology allowing for branching animations. With FieldSENSE, the trailer breaks down Madden NFL 23‘s gameplay into 4 new features: Hit Everything, Skill-Based Passing, 360 Cuts, and Wide Receiver vs Double Back Battles.

Hit Everything essentially allows players to literally hit anyone and anything in the game. Regardless of whether another player is involved in the tackling, Hit Everything will now allow players to join in on tackle piles.

Skill-Based Passing is an improvement over previous Madden NFL games’ passing mechanics. Along with picking targets to pass to, Skill-Based Passing now also allows players to aim exactly where the ball will end up, with the exact amount of power they want.

360 Cuts will now allow players to quickly change their direction in a more realistic manner. Rather than locking players into the direction they start sprinting in, with 360 Cuts, players can now make sharp turns to avoid the other team.

Wide Receiver vs Double Back Battles is essentially an entire suite of new moves for both positions. The battles now focus on the 1-on-1 battles off the line that Wide Receivers and Double Backs often find themselves in off the line.

Madden NFL 23 was unveiled alongside a trailer last week. It is set to launch on August 19 on PC, PS5, Xbox Series X|S, PS4, and Xbox One. The new FieldSENSE features will only be available on PS5 and Xbox Series X|S.