The curse of the downloadable content update has plagued many titles over the years; ones that really didn’t need additional content. By contrast, Magic 2013, as with all other titles based on trading card games, can do with continued additions. Expansion 1 does what you’d expect, offering new cards and resulting decks and the subsequent campaign and challenges to house them all. Whilst it rectifies some of the deck related issues present in Magic 2013, there isn’t a huge amount here overall. 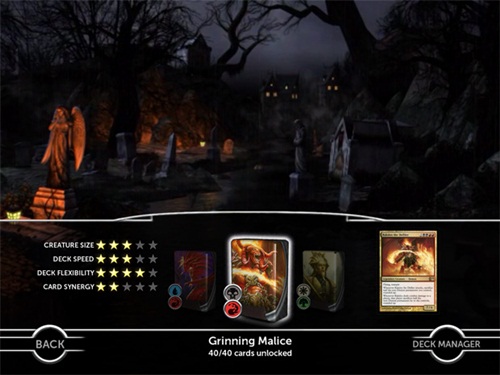 Those star ratings are high, but they don’t go up to 11; yet.

Five new decks take to the stage in expansion 1, with each deck representing a guild that is set to appear in Return to Ravnica. Even the briefest of encounters with the decks will reveal a few things. On the good side we have the multicoloured elements of each deck. The dual coloured deck is standard fare in any Magic scene, so it’s good to see some decks using this format after the mono-thematic nightmare that was the decks in vanilla Magic 2013. The bad side is that the they seem a little overpowered in comparison to the original decks. It’s not that the cards are any better, but the theme of each deck is strong enough that a skilled player can snowball to a swift victory with relative ease.

Each deck has its own campaign mission, and you must defeat the deck in order to add it to your collection. The first deck you encounter is the Selesnya deck, Collective Might: A hard green and white deck that focuses on cards that are powered up when you have loads of creatures in play. Though slow to start, this deck picks up some serious power in late game. The Azorius deck, called Aura Servants, focuses on the use of enchantments to power up some menacing blue and white monstrosities. The Izzet deck, Mindstorms, is a blue and red deck that is all about using instant and sorcery spells to turn the tide of battle. The penultimate deck, the Rakdos’ Grinning malice, combines the debilitating power of black magic with the fast hitting instants found in the average red coloured deck. The final set, the Golgari’s Sepulchral strength features the best of black and green spells and creatures to ensure you will always beat your opponent in raw tests of strength. 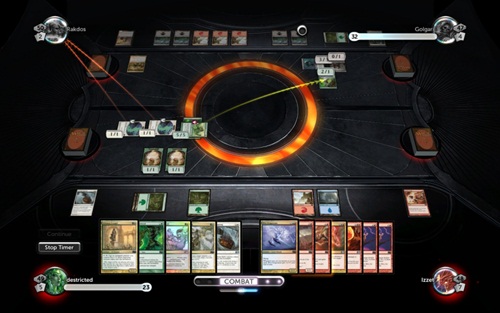 Because one colour decks are for losers.

The five decks offer great variety and utility, and each comes with unlockable cards that keep the ball rolling as you continue to get comfortable with each guild. The problem is the campaigns themselves. With only five battles and no additional encounters, it’s easy to feel a bit short-changed. There is a revenge campaign that offers a greater challenge, but it’s still just the five same battles repeated once more.

The other additions are a bit more substantial, albeit not enough to completely round out the package. New challenge levels are available in expansion 1 and, whilst they aren’t going to revolutionise the way you perceive Magic, they offer a decent mental workout and see a step up in the difficulty of the original challenge levels. New avatars are also available, allowing you to better express your inner planeswalker. 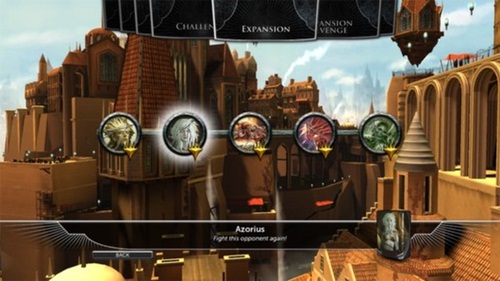 With only five levels to go through, the campaign isn’t all that long.

Overall we have a varied and welcome update to Magic 2013. The big problem is that there’s just something missing. Yes, there are new decks, but without any new modes or truly fresh campaign elements, it might not be satisfying enough an update for the more casual Magic fans. This could have been solved had cards from the upcoming Return to Ravnica block been included, but alas it seems that time was against Stainless Games in this regard. Still, if you’re tired of the decks in vanilla Magic 2013 and have $5 to spare, you could do much worse.

New themed decks from the guilds of Ravnica, We finally have some multicoloured decks, New challenges are welcome

New campaigns are short lived, New decks could be seen as overpowered, No cards from the upcoming Return to Ravnica block

Final Verdict:
FAIR
Adding new decks that rectify some of the issues with vanilla Magic 13, Expansion 1 offers five new decks and corresponding campaign levels but, at the $5 price point, it may feel underwhelming for some
A copy of this game was provided by Developer/Publisher/Distributor/PR Agency for review purposes. Click here to know more about our Reviews Policy.