Magic The Gathering: Duels of the Planeswalkers 2013 Review

The original Duels of the Planeswalkers seemed to come out of nowhere back in 2009, and it managed to reignite my long lost love of Magic and of card games in general. Fast forward three years and I’m eagerly snapping up Magic 2012. I wouldn’t use the word disappointed to describe my feelings toward 2012, but there weren’t many real noticeable differences outside of a new mode and the new core set, and the few UI tweaks around seemed minimal at best. It seems history was doomed to repeat itself with Magic 2013, as the game remains almost identical to its predecessors, albeit with new cards and yet another new mode.

To start off with the negative is unfair on Magic 2013 though, as it’s still a well made title. It’s a very transparent simulation of the Magic: The Gathering card game, allowing the subtle nuances and elegance of Richard Garfield’s seminal trading card game to come to the fore. If you’re reading this and scoffing at the thought of a turn-based card game, I’d highly recommend putting your prejudice to one side and trying Magic out, as it is truly a refined classic of the gaming world. Hell, anything that has managed to last since 1995 with such fan devotion and popularity must be doing something right. If you are indeed new to the series, you’ll be glad to hear that Magic 2013 retains an excellent tutorial, and continues to offer helpful tips about more advanced rules as and when they come up in normal play. Learning a new card game can be a daunting experience, but you’ll be cancelling spells and summoning beasts with the best of them quickly. 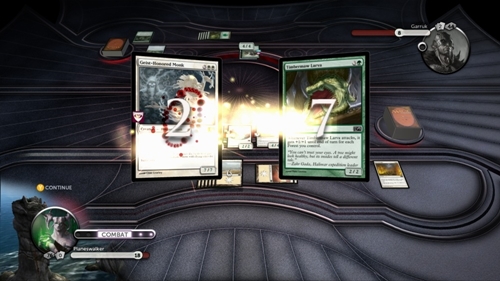 Outside of the tutorial, the whole experience of 2013 also seems set up to accomodate new players. You start off with a choice of two pre-constructed single colour decks, and you slowly unlock more as you take on AI opponents in the campaign. All the decks work well and offer a multitude of interesting strategies. The UI addition of deck ratings also allows you to check things like card synergy and creature size in a deck at a glance, a feature that is certainly helpful for picking what deck to use for a given situation. The problem with the decks is the same issue that persists through most of Magic 2013 though, the fact that the Duels of the Planeswalkers series still fails to offer much for seasoned Magic players. The single colour decks are a great introduction to the functions of each mana colour, but most Magic players I know play with two, or even three, colour decks more often than not; something you can only do with one deck in Magic 2013. Having only one multicolour deck seriously limits strategic choices in the game, and seems like a real step back from the deck choices on offer in the two previous Duels of the Planeswalkers games.

Another issue for players as they become more familiar with the game is the continued lack of proper deck editing. Rather than offering a huge pool of cards and making players construct their own decks, Magic 2013 instead just offers a few additional cards for each pre-set deck that you can unlock, and you can either have all of these cards in a single deck or remove certain cards as you please. The deck editing UI is certainly more helpful this time around, but the lack of proper customisation remains a missed opportunity. It’s commendable that Stainless are attempting to keep the game accessible for new players, but it’s a true shame that players still have nowhere to go once they learn the tools of the Magic trade. 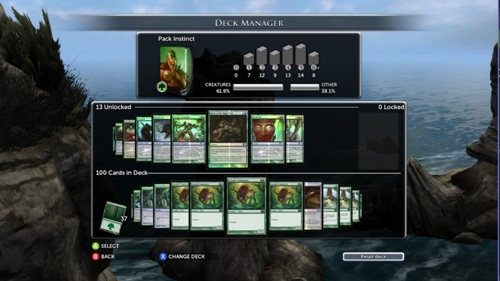 Though it certainly isn’t long before the new 2013 core set of cards is released, veteran Magic players may want to play Magic 2013 just to get an early sneak peak at some of the new cards set for release. The new cards are certainly interesting, and there seem to be more completely new cards in this set than in previous core sets that have recycled older cards. There are certainly some interesting power balances as well, with the green cards getting a mild (but potentially necessary) nerf and the blue deck finally not sucking again like it did before Magic 2012. It won’t completely revolutionise the game, but the new cards will likely be a hook for many players.

Possibly the only truly new content in Magic 2013 is the Planechase mode, a four player free for all with a unique twist. The core objective remains the destruction of your combatants and their creatures, but an additional deck in the centre adds location cards that can alter the game drastically. Each player has a plansewalker die that they can roll using their mana, which in turn allows travel between random locations in the deck. Each location has different rule modifiers and abilities that can completely alter the tide of battle if used correctly. It’s a fun party mode with a surprising depth and one that could be a great laugh with friends. The only issue with its inclusion is the lack of explanation over how the planeswalker dice work, but it’s not too hard to figure out. Along with a dedicated Planechase campaign, the normal one against one and the similar, but harder, revenge campaigns also make a return. These also feature new types of encounters with generic creatures where the cards played are identical each time. It wasn’t all that fun in practice, but it’s an interesting idea all the same. 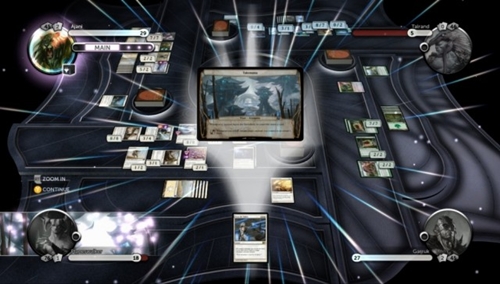 It could’ve done with a better introduction, but the new Planechase mode is a blast

With all the various modes, along with the lure of online and local multiplayer, Magic 2013 is certainly a rich package. Well, it’s a rich package for those who haven’t experienced the Duels of the Planeswalkers series before. Overall, the newest addition to the series offers a fun new mode, has the freshest and largest collection of cards in the series to date and retains the awesome Magic simulation that made me so fond of the game in the first place. At the same time though, the game has barely changed in over three years now, and it’s starting to wear a little thin. If you’re new to Magic or want a reason to come back to it after some time, Magic 2013 is an excellent way to break yourself in gently and experience the wonders of Magic The Gathering. If you’re a seasoned player or are familiar with the Duels of the Planeswalkers series, then think before instantly splashing out your cash. Magic 2013 is certainly a well made game, but Stainless really need to add something properly new into the next instalment.

Magic is still an awesome game, Planechase is pretty interesting, The new decks and cards are exciting, The UI has been streamlined and improved, Great for new players

Still no real deck building, Only one two colour deck, No major campaign improvements, Feels all too familiar to series fans

Final Verdict:
GOOD
Another update to Stainless Game's Magic The Gathering simulator, 2013 offers new cards and an interesting new mode, but the tweaks and additions still fail to drastically alter the usual formula
A copy of this game was provided by Developer/Publisher/Distributor/PR Agency for review purposes. Click here to know more about our Reviews Policy.