The story has you, the last of the royal bloodline of the great kings, trying to liberate the land of Ardania from the clutches of evil. The story is neither interesting nor well told. All back story is told by a Sean Connery sound alike, whom I have come to call Con Seanery. Con Seanery is your royal advisor and “encourages” you to take part in the game’s missions. They try to be funny by throwing some jokes into the back story but most of them aren’t very funny, sorry Con Seanery but your jokes suck. Missions unlock as you complete the prerequisite mission(s). While the set up feels slightly open ended, it might have been better to have a more structured progression. You could choose not to do a certain mission, but later come back to it and find that there was something that would have made other levels much easier, where were you on that one Con? One cool aspect is that at the end of each level you can choose one of your heroes to become a lord. You can then, for a large sum, hire you lord in later missions through the Hall of Lords.

The gameplay is both the greatest strength and greatest weakness of Majesty 2. The lack of direct control over units can lead to a lot of fun as you learn how to make your heroes do as you desire. It effectively becomes an RPG from the other side. Instead of playing the hero, you play the world around them. To make heroes complete tasks you plant one of three flags, explore flags have your heroes explore that area, attack flags make heroes attack that target, and defense flags make heroes defend that target. You add a reward of gold to the flag until a hero or heroes accept(s) it. As units level up it will become more costly to have heroes to accept quests so you must either have a large sum of money or continue to hire more heroes. 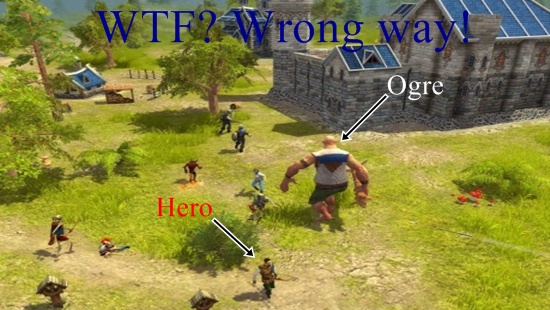 The picture says it all.

The lack of direct control becomes an annoyance when you need to give commands better suited for micromanagement. For instance the defense of you lands becomes a difficult task without direct control. You must plant either attack or defend flags in all of the areas being attacked, but with the fact that heroes can all accept the first flag they will most likely not be able to prevent loss within you kingdom. This can and will quickly lead to frustration as you find tour buildings crumble to the ground while your heroes stand around the now safe Peasant House. Also heroes have the nasty habit of ignoring enemies attacking you buildings. Many times I saw enemies attacking a building and my hero simply walking by on the other side apparently oblivious to the burning building.

The obvious thought here is to construct guard towers to protect your land. A good thought albeit an expensive one. As you construct any type of building, including towers, the next building of that type becomes more expensive. That means the more towers you build the costlier it becomes. They do not become any stronger and it didn’t seem as though the Peasants were researching better building methods that would cause the rise in price. It is a peculiar mechanic and a quite annoying one when the only way to defend you land by any simple means is to construct towers. The rise in price wouldn’t be so bad if your kingdom could bring in enough money but unfortunately to make anything that can generate income you will need to spend much more than it is seemingly worth.

Things will quickly become repetitive and boring as you begin each level the same way by building an abundance towers and watching your heroes do very little of use. Every level can be played exactly the same with a few exceptions. 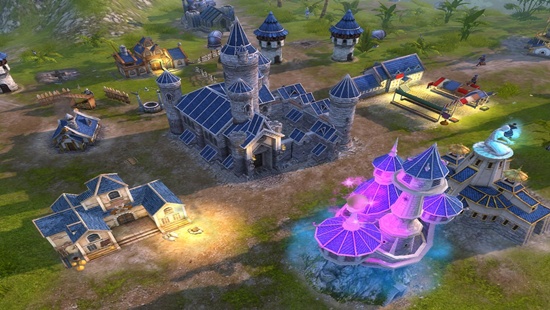 The game looks great, but not to the point of its requirements.

A strange aspect of the game is its graphic requirements. The minimum requirement is a graphics card with 512 VRAM. The game looks good, but 512 seems more than a bit steep. Crysis is a much better looking game and has lower requirements than Majesty 2. Nothing about the environments or buildings ever stood out as really using all of the graphical power. Another issue is that the game can be a little crash happy. Several times I have received a message from Windows that the loader has stopped working. There have also been several instances where the game has, out of nowhere, stopped responding.

Majesty 2 features multiplayer hosted through Gamespy. The only problem is that no one is playing it. I couldn’t enter a match so I have no opinion of the multiplayer though I assume it plays similarly to the single player though you must defeat another player with the same methods. To be honest it didn’t really sound appealing to begin with and probably wouldn’t be very fun.

Majesty 2 is a unique game for sure, but being unique doesn’t mean you are good. The gameplay is fun to learn but is frustrating to master. There are too many faults to say that it will become a common theme in future RTS games. Majesty 2 is one of those games that you will play when you are really bored or have nothing better to play, which is ironic when there are many games better than this one.

Final Verdict:
MEDIOCRE
Majesty 2 stands out as a unique take on the RTS genre but it does not offer anything else compelling.
A copy of this game was provided by Developer/Publisher/Distributor/PR Agency for review purposes. Click here to know more about our Reviews Policy.