March of the Eagles Review

This game is not for everyone.

March of the Eagles is based European conflicts that are occurring in the era of 1805-1820. You’re entire objective in the game is to pick a country and conquer all of Europe to be victorious. The single-player campaign allows you to pick the 8 major countries such as Russian, Prussia, Sweden, Great Britain, French, Ottoman, Spain and Austria. Each of these countries have the power to conquer all of Europe on it’s own. You can also pick any of the other European countries but those have different victory conditions. Once you pick your country it will be all up to you and your style of play on how you choose to begin your domination of Europe. The multiplayer allows you and your friends to duke it out and dominate Europe with 32 players and it’s more interesting than single-player. 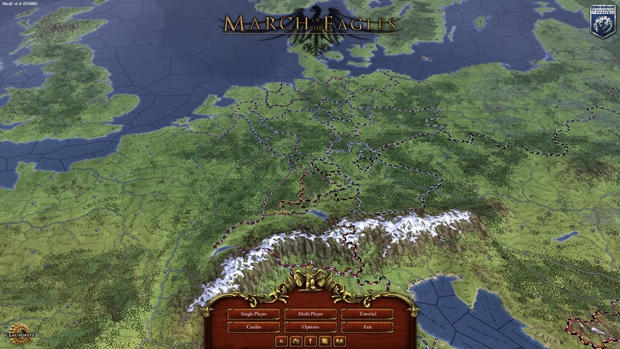 The Game and Single-Player

If you are familiar with the Wargame genre, or any of the previous from Paradox Interactive then you should have a easy time understanding how the game works and plays. However, if you are completely new to any of their games, or just the genre itself then get ready to be confused and intimidated. Wargames are not for everyone, if you really want to understand how they work and play, then I strongly suggest  playing the tutorial chapters in March of the Eagles. The tutorial in the game guides you and teaches you the main mechanics of the game such as diplomacy, war, troop management, building and finances. Once you’re finished with the tutorials you should be a tad less intimidate playing the game and getting your feet wet into the Wargame genre experience.

In March of the Eagles you’re objective is to be able to manage your troops in different regions, send them to take over territories, recruit and so on. If you want to take over a piece of a region, you can send your troops to the specified region and assault the area, if your troops manage to conquer the enemy then you will take over the region, however, another enemy troop can come in and fight you back to re-gain control of the region. One of the ways I play is, I recruit different kinds of infantry units and send them to a specific region where they all merge into a giant single unit. You can split your units into divisions if you wish for multiple attacks or you may just be one big force that moves from region to region and conquering the region one by one.

When you move your units from place to another it takes them several days to get there depending on the distance. March of the Eagles has an interesting pause mechanics, when your making any sort of political choices and want to not be in involved in a war at the current time you can pause the game by pressing spacebar. When the game is paused you’re still able to mess around with political gameplay of the game, but your units will not be moving anywhere or fight anyone for that matter until you unpause the game and the in-game time starts to flow. This allows you to do anything you need before you start going into war and let your political choices start triggering certain things. 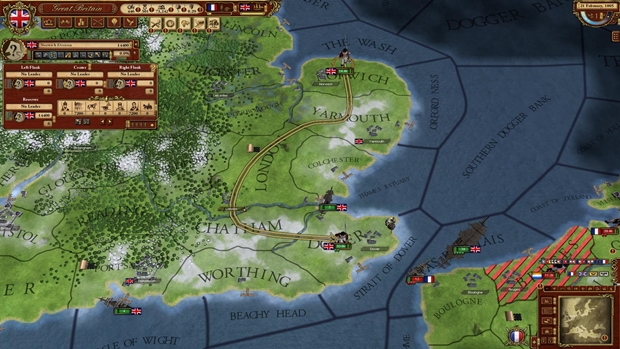 As far as political choices go the player can declare war on countries officially or ask them to join you in an alliance. Later down the road once you have gained what you wanted from a particular country, you can backstab the enemy once the contract ends, or you may even have them sign a peace treaty to end the war. If you’re in an alliance with a country you can ask them to send troops to a particular region to help you defend or just to get more troops so you can plan an attack on whatever region you want.

The sea and naval gameplay is also big part of game, you can build ports and recruit different types of ships. You may use transport ships to board your units and then land on the enemy’s coast region to start moving your troops along and dominating the country. You may also build different types of buildings in your regions such as forts, ports, depots, civilized developments  and other things. Ports allow you to create ships and have another waypoint of transportation,  civilized developments increase your taxes, supply and manpower.

The campaign in March of the Eagles has different difficulty settings that range from Very Easy – Very Hard, you can even pick how aggressiveness the computer’s A.I. is which is a nice touch. If you’re to the game or a veteran to these types of games then you may customize the campaign’s difficulty options to your heart’s content.

The soundtrack in the game is good, it’s not annoying, fits the game’s style and is good to listen too as you play the game. However, the visuals are absolutely horrendous, I understand this is a top-down wargame that doesn’t require a lot of graphical power to enjoy, but at least make the game somewhat interesting when it comes to visuals. Low resolution textures, ugly menu art that makes the game more confusing and interesting too look at. Game’s overall presentation feels extremely cheap due to it’s lack in the visual art-style. It feels like the development team has worked really hard on the soundtrack and then decided to slap cheap menus and textures at the last minute. 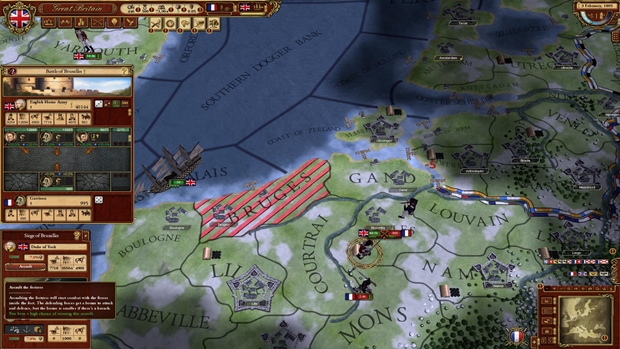 Multiplayer is where the game shines, there is absolutely nothing quite like it to go with or against a total of 32 players for Europe domination. Sure you can play against an AI in the single-player campaign but the computer controlled player can only do so much. If you and your friends enjoy these types of games then there is a lot to be had here, especially considering the amount of players that can play this game at a time. The game is a lot more intense and nerve-wrecking than the campaign and that’s only because you’re going against real life players. You join a multiplayer game by joining a server, hosting your own, make a lan party or use the metaserver.

March of the Eagles is a decent Wargame, this is one of the easier games to get into if you’re trying to understand how this genre works and if you have never tried anything like it before. However, most gamers will be turned of by the ugly visual presentation of the games overall look and menus. The game is more about war choices than political choices which is a good thing in my book, no one really likes to deal with politics in video games, players are always more interested the combat and fighting. Single-Player is decent, but the multiplayer is way more fun and the soundtrack is great. Check this game out if you’re interesting in this kind of genre, but be ready to be letdown by the visual quality and presentation.

This game is not for everyone, single-player is not as fun as multiplayer, horrendous visual quality

March of the Eagles is a good wargame whether you're new to the genre or not. Multiplayer is a lot of fun. The soundtrack is nice, but the visual presentation is lacking and this type of game is also not for everyone to enjoy.

A copy of this game was provided by developer/publisher for review purposes. Click here to know more about our Reviews Policy.
Tagged With: March of the Eagles, Paradox Interactive, pc, Wargame