Mario and Sonic at the London 2012 Olympic Games 3DS Review

Some game series just don’t make sense. Sometimes an idea that sounds great on paper fails to have a satisfying execution, sometimes a sequel fails to deliver a new experience over the previous game and then some titles are like Mario and Sonic at the London 2012 Olympic Games. This isn’t the first time Mario and Sonic have paired up for some sporting shenanigans, but I certainly hope it’s the last. How the series got a sequel is beyond me, but it’s here and it’s a very hit and miss affair indeed. 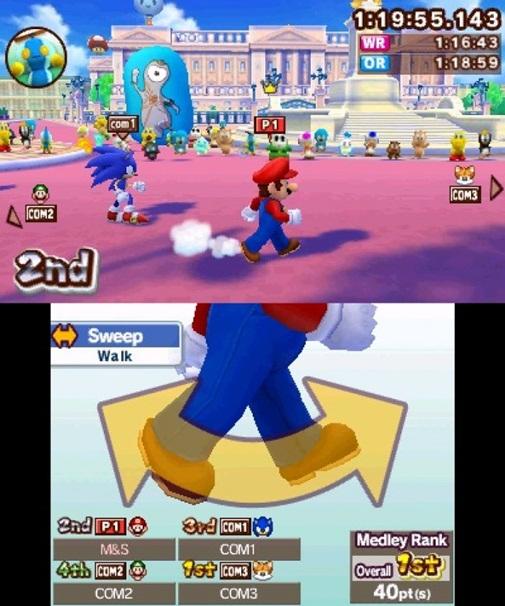 The events are a mixed bag, but are generally pretty fun

The game, at its simplest, comprises a selection of 50 mini-games. As with any mini-game compilation, the different games make the overall experience a mixed back, but the quality of the gameplay is generally pretty good. Though there isn’t a particularly logical approach to the controls, they are generally responsive and fun to use, even when using the usually problematic touch screen and gyroscope control schemes. The issue comes when said controls aren’t especially well explained, as nothing is worse than losing for a reason you aren’t quite aware of. This happens a little too often for it to be ignored, becoming a regular irritant that detracts from an otherwise pleasant experience.

The games themselves are pretty good all around, with the usual Olympic events garnering the expected level of excitement. Some of the bike riding and athletics events in particular are exciting and surprisingly addictive, but they are let down by the more repetitive track events. Likewise, some of the events have a really addicting quality to them, but are out-numbered by some absolute stinkers. Shouting into the microphone to lift weights is one such low point, and any game that tries to tell me that grabbing a water bottle from a refreshment stand is a sporting event needs to sort itself out. 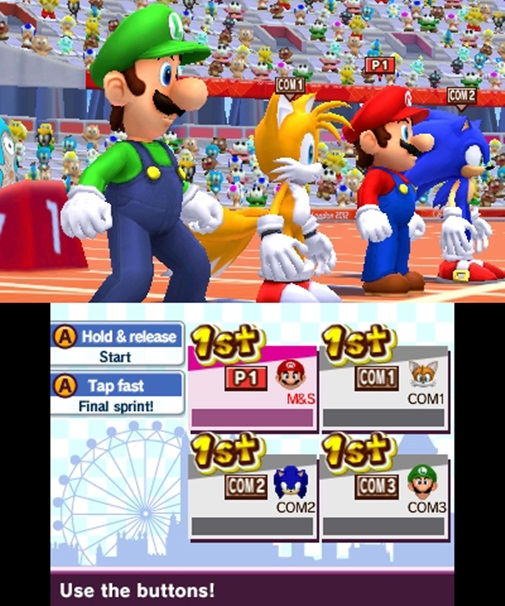 The visuals are crisp, as you’d expect from a normal Mario or Sonic game

Even when the gameplay lets up, the graphics of Mario and Sonic stay pretty decent throughout. The usual colour and flair associated with Mario and Sonic’s flagship games comes through in full force, and the animations are always smooth and satisfying. The stereoscopic 3D effect of the 3DS is also well implemented, providing a subtle depth for those who can withstand the subsequent ocular fatigue.

Getting a few friends together to play through the events is where Mario and Sonic at the London Olympics hits a stride, almost riding on the nostalgia trip of the golden Track and Field days. The lack of online play is a bit of a missed opportunity, though online rankings are likely to really grab those with addictive personalities. 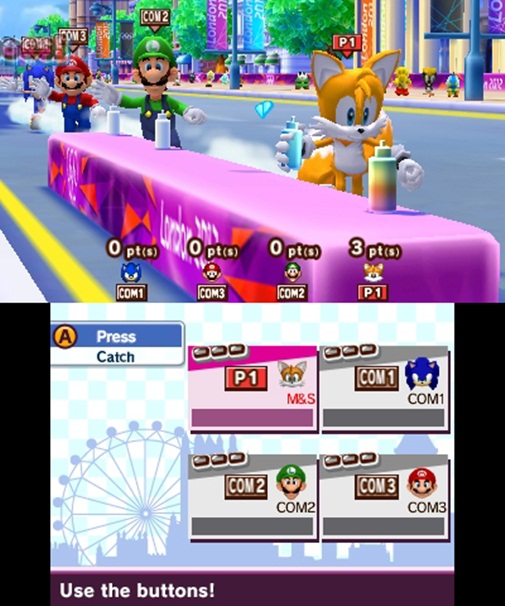 The water bottle event is retarded, and the dialogue in the story mode isn’t much better either

You aren’t likely to always have 3DS owning mates to hand though, so it’s a shame that the game’s single player offerings aren’t really up to scratch. Quick event and medley selections are a decent enough time sink, but the main story mode that should be a highlight is atrocious. The story follows Sonic and Mario trying to stop Bowser and Eggman from delaying the Olympic games with a fog making machine. Whoever wrote the script needs to actually try going to London, as I doubt a fog machine would make much difference at this time of year. The only way to defeat the shadow clones spawned by the fog is to beat them at Olympic events of course, a true cop out that shows just how desperate the plot gets. It’s dull and uninspired and, on account of how short the mini-games can be, it becomes a needlessly plot heavy affair. This should be the main draw for the game, but it serves as little more than a very unwelcome diversion.

There are plenty of mini-games to sink your teeth into, but you shouldn’t be fooled into thinking that Mario and Sonic at the London Olympics is a long game. It suffers the same shallow fate of other such mini-game compilations, with most of the individual games barely able to hold attention for more than a few minutes at best. The story mode is short, and the depth just isn’t there, making Mario and Sonic 3DS a game that isn’t worth your money at the end of the day. Avoid it in favour of the more social console experience.

Controls well, Some mini-games are quite enjoyable, Multiplayer is a good laugh, Graphics are solid, Great stereoscopic 3D

Some events are dull, Gameplay is generally shallow, Story mode is a bad excuse for a single player mode, The story is crap, Control descriptions are often unsatisfactory

Final Verdict:
FAIR
Because Sonic and Mario haven't lost enough of their credibility yet, they both return for more sporting based mini-games that are pulled together by colourful visuals and an underwhelming story mode
A copy of this game was provided by Developer/Publisher/Distributor/PR Agency for review purposes. Click here to know more about our Reviews Policy.