A hollow reduction of the Mario Party formula that no fan should have to endure.

Mario Party has always been a series that divides me from my peers, as for all its dodgy design choices and repetitive sequels, it’s a series I can’t get enough of.It’s all about those clutch plays, the local multiplayer banter, and that moment when you rob a star from an old friend at the last moment, creating a rift in your friendship like only the best board games can. Yes, Mario Party is effectively a board game made digital, but I love it. And that makes Island Tour’s subpar quality all the more painful.

I was concerned when developer NDCube took over from series originator Hudson Soft. Granted, many of Hudson’s staff jumped to NDCube along with the Mario Party franchise, but I was still concerned the series’ winning formula would be tampered with. Despite the massive changes to NDCube’s first party game on the Wii in 2012, Mario Party 9 was a blast, with the fresh ideas and more strategic design decisions arguably refining the local multiplayer shenanigans further than ever before. 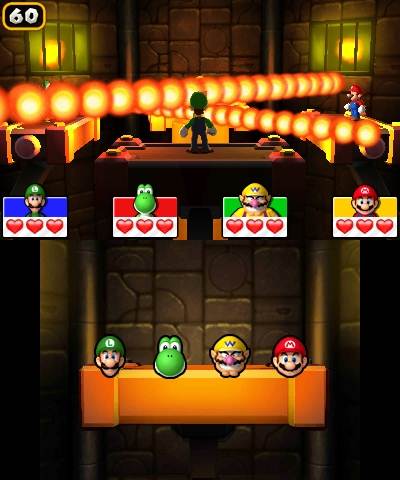 "With my escalating love of the series and NDCube in mind, I struggle to come to terms with how the developer has dropped the ball so significantly with Island Tour. "

With my escalating love of the series and NDCube in mind, I struggle to come to terms with how the developer has dropped the ball so significantly with Island Tour. The third time Mario Party has graced a handheld system, it’s about time someone at NDCube realised it just doesn’t work. Mario Party is about the local, connected experience. Even though multiplayer is supported between multiple 3DS systems, something is lost without the single screen and console being shared by your fellow players. With separate screens there are fewer shared emotions, less connection between your competitors, and most importantly, no hilarious moments where you can troll your friends by ripping out their controllers at a decisive moment.

At least local multiplayer is still included, made easier by a life-saving decision to include download play. Only one friend needs a Mario Party: Island Tour cartridge to facilitate a full four player game, making it easier than ever to get a match going. That said, I feel like online play would have helped. I’m sure everyone and their mum has a 3DS in further afield locations, but in the more rural parts of the UK, getting three 3DS owning friends together in the same room isn’t always an available reality. It never replaces the local experience, but an online options would have been a fantastic addition.

The mini-games show another area where the 3DS’ unique features are used to the full. The gyro sensors, touch screen, buttons and even the microphone are harnessed across Island Tour’s wide array of mini-games. That said, very few of these games are especially enjoyable. There are one or two scorchers there, but they’re hidden amongst a plethora of tired game tropes. 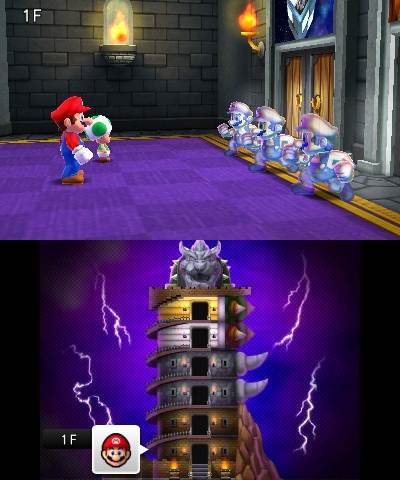 "Linear, flat and dull maps combine with predictable race objectives to create a maddeningly weak gameplay experience that undermines the pleasant unpredictability that the series is best known for."

Climb or descend platforms quickly, stay on a slippery surface longest, go here, remember this, pick this up etc. It’s maddening how Island Tour dumbs down the series’ most “gamey” element to how it felt back in the nineties. All the variations in game types seen over the fifteen years of the series’ history seems all too conveniently forgotten for this particular Mario Party incarnation.

At least a small portion of the mini-games are fun. The boards that house all the mini-games, by comparison, are all black spots on Island Tour’s increasingly poor complexion. Earlier Mario Party games offered non-linear paths on massive boards that gave games a level of long-term strategy, while Mario Party 9’s linear car structure saw one player able to influence all characters’ movements and positions with sneaky tactics and clever plays.

Both board types have done well for the series over the years, but Island Tour manages to combine them in a way that offers the worst of both worlds. Linear, flat and dull maps combine with predictable race objectives to create a maddeningly weak gameplay experience that undermines the pleasant unpredictability that the series is best known for. 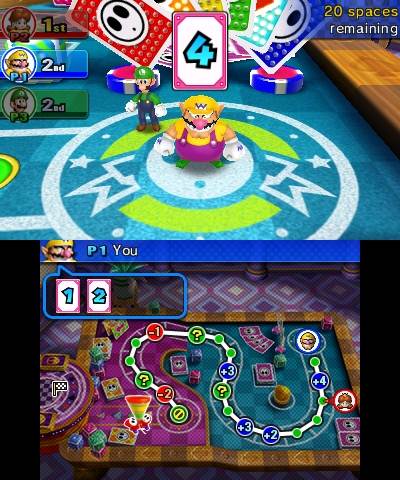 "More disturbing is the lack of interactivity between players. Most items just manipulate dice rolls and movement in some way, with players only switching places or otherwise affecting each other through random lottery reels activated on certain board spaces. "

More disturbing is the lack of interactivity between players. Most items just manipulate dice rolls and movement in some way, with players only switching places or otherwise affecting each other through random lottery reels activated on certain board spaces. The board spaces no longer assign team colours as well, meaning the eventful 3v1 and 2v2 game types have been totally dropped. As much as I hated it back in the day, the inter-player griefing and meddling offered some of the most memorable gameplay experiences in Mario Party. Where are the duel spaces, coin swappers and Boo’s infamous theft services when you need them!

With the core offerings so poisonous, it’s surprising that the game’s superficial casing holds up so well. Pleasant, colourful visuals and a plentiful helping of nostalgia and memorable characters bring the Nintendo charm in spades, and a mini-game survival mode and collectible snow globes show at least a vague attempt to cater more to a single player unable to gather their friends conveniently. These are small mercies in an otherwise torturous experience, but credit must go where credit is due.

As strange as it is to put in writing, reviewing Island Tour has reminded me that I’m a big Mario Party fan. A source of rage for me in my overly competitive youth, and a source of increasingly elaborate drinking games in my misguided young adult years, Mario Party has been there throughout my development as a gamer and as a person, and I really hate to see it underperform like this. Whether you’re new to the series, or a dab hand at Mario Party, you deserve much better than this. Vote with your wallets and invest in the superior console prequels.

Final Verdict:
BAD
Island Tour retards the Mario Party formula, removing all the new features of Mario Party 9, while giving very little back to help keep players engaged.
A copy of this game was provided by Developer/Publisher/Distributor/PR Agency for review purposes. Click here to know more about our Reviews Policy.