Posted By George Reith | On 12th, Dec. 2010 Under Reviews | Follow This Author @GNReith

Regardless of how it may be presented the idea of a marvel hero mash up reminds of my Marvel vs. Capcom days and, as a result, gets me somewhat excited (though not in that way.) As such I was rather hoping that Marvel Super Hero Squad: The Infinity Gauntlet would be on a similar level of gameplay excellence but, even if my expectations were lower, The Infinity Gauntlet would not meet my standards.

The game begins with Ironman and the Hulk looking for a present for Thor but discovering on their travels that Super Skrull has recovered the Infinity Gauntlet mentioned in the game’s subtitle. It is thus that the Super Hero Squad must prevent Super Skrull from obtaining all the Infinity Gems lest he gain the power to destroy the universe. Its all very by the book and is nothing we haven’t seen before in copious amounts of generic game and comic book plots. Admittedly it does a good job of incorporating all your favourite Marvel heroes and villains along with a few obscure entries in the character roster but, that said, this does little to vary the gameplay on account of all the characters controlling in an identical fashion. 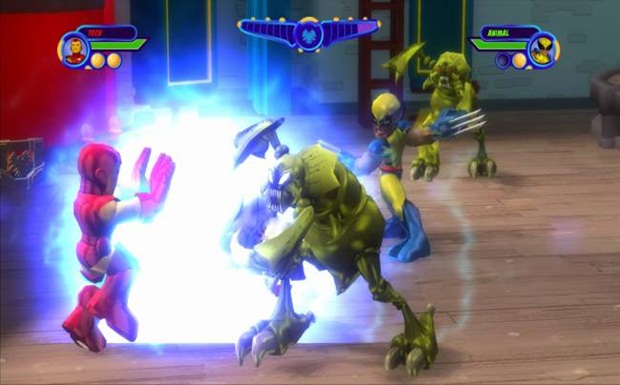 The combat entails you mashing square repeatedly until everything on screen is dead. Rinse, wash and repeat

The main bulk of the game sees you progressing from A to B in linear 3D environments using the powers of two heroes to defeat various enemies and clear the odd puzzle as you go. Think the Lego series of games and you’re pretty much there. You need to either swap between heroes to use their unique abilities to clear certain obstacles or you can get a second player to inhabit the other hero in drop in/drop out co-op. Whilst this sounds well and good, the differences between the heroes are minimal. Each character has a unique move that is needed for some of the puzzles but these are almost always a context sensitive action. In terms of the combat and platforming sections all the heroes control in a similarly familiar way that involves countless button bashing to clear the way of foes. In this way the combat epitomises the gameplay in its derivative and repetitive nature. The platforming and puzzle sections are slightly more varied, but there shallow and simplistic nature means they can do little to redeem the patience shattering nature of the combat in Super Hero Squad. Occasionally a mini-game will be thrown your way and, though this helps to mix up the proceedings, these things are known as mini-games for a reason. Though the gameplay is generally lacking in depth I must praise the inclusion of heroic feats that each character possesses that unlock new maps in the challenge mode as you complete them. The challenge mode consists of, unsurprisingly, different challenges revolving around enemy survival or the mini-games that pervade the story mode. Thankfully these challenges add a decent amount of content and variety to the package and can be played with up to four players simultaneously. 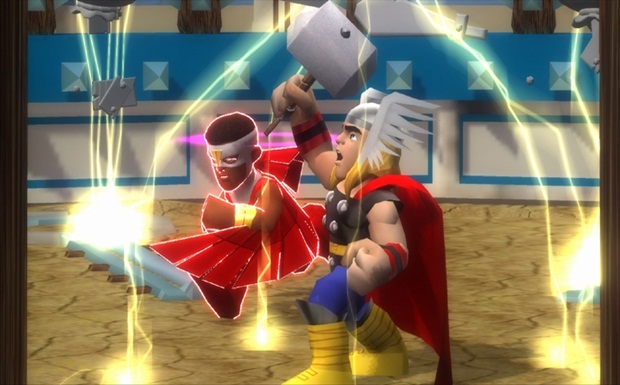 Whilst there is at least a limited enjoyment to be had in the gameplay of Super Hero Squad, it is a shame that the presentation of the game is almost unanimously poor. The graphics have the vibrancy of the super deformed toy line, but generally look pretty scruffy around the edges. The textures are dull and uninspired for a start, and the less said about the blocky animations the better. The truly disappointing aspect of the game’s presentation comes in its voice acting. Many famous names dot the cast, culminating in Mark Hamill’s name gracing the roster but the voice acting is still really irritating regardless. It doesn’t help that dialogue is very cheesy and corny at best, but the stereotypical voices do little but frustrate. The silver surfer sounds like a “surfer dude,” the Hulk sounds like a primary school bully and Wolverine just sounds like a gormless half-wit. It’s the kind of thing you’d expect from a game aimed at kids, but is still a real blemish that can’t be ignored.

If Super Hero Squad does happen to tickle your fancy, you’ll be glad to know that it has enough content to keep you satisfied for at least some time. The story mode is of a fairly average length, but is bound to keep you going if you attempt to unlock the achievements/trophies relating to each character’s heroic feats. The challenge mode is also varied and lengthy enough to extend your play time significantly should you be willing to rise to the challenge. The whole thing is also extended by the challenge of the game which, whilst it was occasionally frustrating, was rather welcome in comparison to the usually easy nature of kids games. 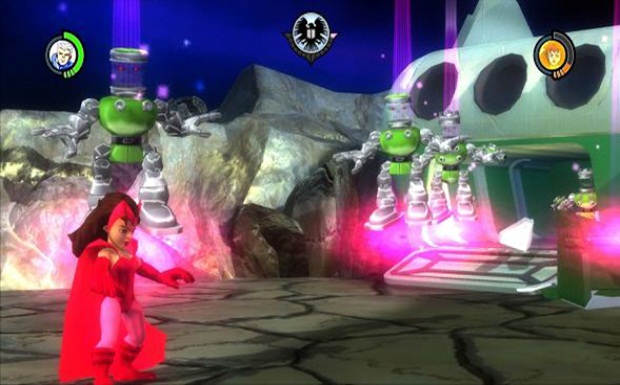 The graphics aren’t the worst thing I’ve ever seen, but a little more effort would’ve gone a long way in this department

Marvel Super Hero Squad isn’t necessarily a bad title, but it fails to do anything special. It is a title that is clearly derivative of the Lego game series, yet it also can’t quite match the fun factor that those titles had. Super Hero Squad must clearly be given the benefit of the doubt on account of the kid friendly demographic it aims for and due to its low retail price but, in spite of this, there are still other titles for kids on the market that will provide more enjoyment for a similar price tag.

A super deformed toy line turned TV show, turned video game, the Infinity Gauntlet aims to level some 2D superhero action at a youthful demographic but delivers a mediocre experience that is unlikely to capture audiences of any age

A copy of this game was provided by developer/publisher for review purposes. Click here to know more about our Reviews Policy.
Tagged With: marvel super hero squad: the infinity gauntlet, ps3, xbox 360