Medal of Honor: Warfighter looked good when it was first revealed. As more information on the game started coming our way, we realized it’s trying to mimic what games like Call of Duty already do so well, just like 2010’s MoH reboot did. Even so, we were excited. Often it has occured that a game is very linear, trying to be a CoD clone while actually it ends up being rather good- case in point, Homefront, or maybe even Battlefield 3.

Unfortunately, that is clearly not the case with Medal of Honor: Warfighter. Warfighter does not learn from the mistakes of its predecessor, which was criticized by many for being a CoD clone, and goes ahead and shoves you down one corridor after another, a barrage of scripted sequences you have no control over coming your way, cutscene after cutscene. While games like Black Ops and Modern Warfare manage their linearity rather well, Warfighter fails at being even a good linear game.

Other than being unbelievably restrictive- even more so than Modern Warfare 3 or Battlefield 3’s campaign- Warfighter is just never fun. There is one particular chase sequence in a car that begins to show semblances of thrill and excitement, but even that fades away too quickly. The game seldom gives you much control over what you do, and when it does, it’s plain boring and dull.

Even the shooting doesn’t feel very satisfying, despite the fact that the sound effects and weapon design are spot-on, simply because of how dumb the enemy A.I is. They just stand their ground stupidly, their movements repetitive and predictable as they stick their heads over cover or start running around corners to charge at you. You never feel the rush of adrenaline and excitement you usually should in intense shootouts, because the shootouts in Warfighter just aren’t all that intense. 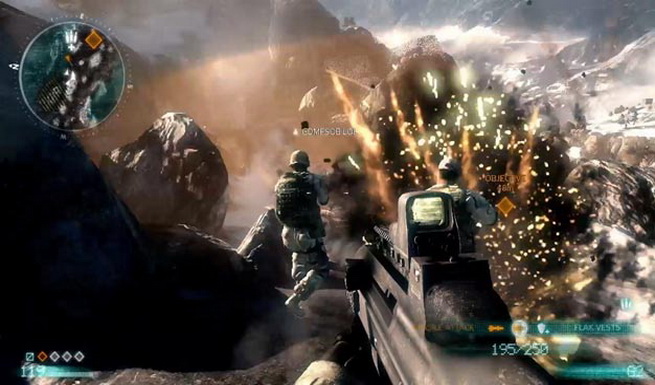 What doesn’t help is the story. Warfighter tries telling a story that talks more about the personal lives of Tier 1 operators than worldwide wars on terror, and it certainly tries to move you emotionally, but much like everything else you experience in the game, it falls flat. How can you care about the families of the characters that the game doesn’t bother to develop at all? How can you believe these Tier 1 operators are the good people they are being shown as when they’re shooting bullets and cracking skulls left, right and center? It’s obvious that the team at Danger Close has immense amounts of respect for these Tier 1 operatives. They’re just not able to show that very well in the game.

The multiplayer of Warfighter is where you might have a little bit of fun. It’s shooting actual people and winning points- of course it’s fun. And some of the modes are refreshingly innovative at times. However, the map design is awful, and the game gets really boring, really fast. Don’t expect to spend the twenty of hours of multiplayer gameplay here that you would in, say, Halo or Battlefield.

One area, though, where Warfighter truly shines and leaves no stone unturned is the visuals department. Usually when a game is as atrocious as Warfighter is, you start looking for niggles in everything the game does, but even the most cynical and critical people will find it hard to fault Warfighter for its visuals.

Having been built on Frostbite 2.0, you expect it to be something special, but Warfighter looks even better than Battlefield 3- that’s saying something. Everything from the lighting and particle effects to the detail in the animations and character models is done really well. And when you walk out of a dark corridor and into the open, and see the sun’s rays blinding your vision, to slowly get your eyesight back and see dust particles floating in the air in the aftermath of a recent explosion you caused, it’ll be hard not to gape.

Ultimately, however, Warfighter is a disappointment. We didn’t expect it to be the next Combat Evolved or Half-Life 2 or Crysis or Modern Warfare, but we did expect it to be enjoyable, to be at least a decent game. Unfortunately, Warfighter is none of those. With other better shooters coming out very soon, Warfighter is clearly not the title you should buy right now. Or ever, for that matter.

Frostbite engine makes the game look excellent; Multiplayer can be engaging sometimes; It's short, so you don't have to tolerate it too much

Final Verdict:
BAD
Warfighter tries to follow a formula that is practically done to death by now, and sadly, it doesn't do it very well.
A copy of this game was provided by Developer/Publisher/Distributor/PR Agency for review purposes. Click here to know more about our Reviews Policy.