Games that tie-in to movies are made so the cinema experience can be extended to the home, and so gather more cash for the studio, though very few receive good reviews. Megamind was released in cinemas prior to Holiday and received great critical praise. Typically, the same cannot be said for the related video game. It was developed and published by THQ, and is available on just about every platform except mobile phone. The Xbox/PlayStation versions  have each have two-player local co-op, whilst the Wii version reportedly can support 4 local players.

Unlike the vast majority of tie-in games, Megamind: Ultimate Showdown is set after the film’s events. The narrative consists of a sudden crimewave led by The Doom Syndicate and their Doom Goons hitting the city which the hero of the day, Megamind, must stop, using his arsenal of weapons. Basically, your typical superhero story.

The game’s weapons are limited to three. In total. The De-Gun can be used to de-stroy and de-hydrate enemies and obstacles, the Blower Glove can be used to blow enemies and obstacles away and the Tesla Glove can be used as a close-range weapon, as well as to control electrical devices. Each weapon can be upgradaded by collecting B.I.N.K.E.Y.s – orbs scattered around levels and gained by breaking things – there are no real advantages to doing so. Players will spend most of the game mashing the attack button to fend off enemies, whilst the game’s auto-aim system removes any challenge. 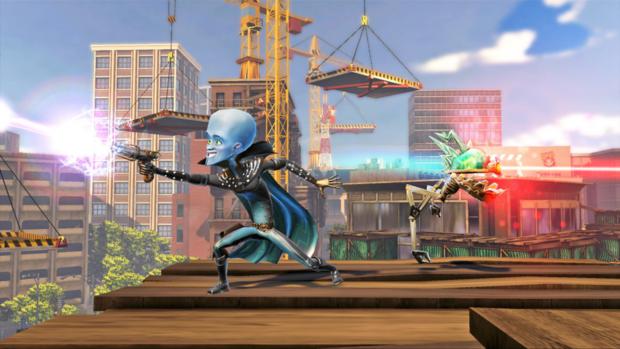 Co-op seems as though it was added as an after-thought, as none of the enemies acknowledge the second player.

Enemies in Megamind: Ultimate Showdown come in the form of builders, rock band members, and cooks/chefs who use their appropriate weapons (i.e. guitars, rolling pins, etc) to prevent Megamind from progressing. Also spread throughout the game are a series of boss levels, but none of these are particularly difficult to overcome.

As players progress through story mode, mini-games are unlocked. There are four mini-games in total. Rampage sees players scoring as many destruction points as possible while in the special battle suit within the time limit. B.I.N.K.E.Y. Slalom consists of players collecting B.I.N.K.E.Ys. Sticky Boots consists of climbing a building in the midtown area, available on the easy, medium and hard difficulties. Lastly, Mega-Pod is a race through the streets of Downtown in the Mega-Pod with three tracks available all-in-all. 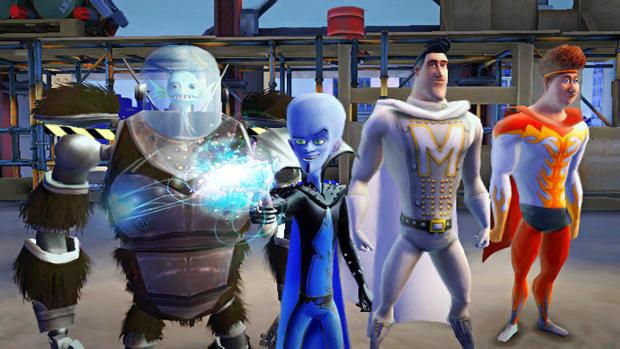 Controls are limited to mashing attack and moving.

As a package, the mini-games are quite poor. While they do provide a slight variation and increase the game’s length by half an hour at a push, they are more than likely to grab the player’s attention once and never again due to their lack of depth and replayability. The lack of depth and replayability is also evident in the single player adventure. The gameplay sees the player often repeating the same goals (such as placing a weight on a plank of wood and jumping on boxes) and even repeating identical parts of the level, with many portions of the game looking as if they were simply copied and pasted to expand the already short playtime.

Graphically, Megamind has not been made to a good standard. With the exception of the pre-rendered opening and ending sequence which are fantastic quality, matching what you’d see at the cinema, the remainder of the game’s graphics are quite poor, especially the lack of detail. As for the audio, the inclusion of Jonah Hill as a voice actor (from the film itself) makes up for the weak soundtrack. 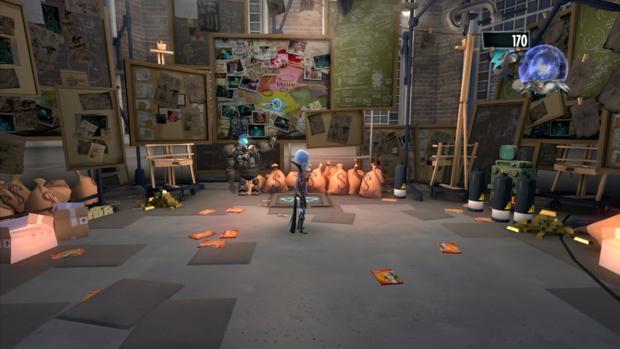 Not only was this a bad game, but it was a bad movie too. Despicable Me was better, imho.

Multiplayer comes in the form of co-operative action in which the second player takes control of a robot that has the same abilities as Megamind. Oddly, enemies don’t take notice of the second player who can walk through every level untouched. While the implementation of multiplayer could have been a lot better, it’s still a welcome feature within the game.

It’s probably also worth mentioning the game’s achievements which, as you would expect, are easily obtainable. Arguably the hardest to unlock is for defeating the bosses without losing any health but even that isn’t difficult. The remaining achievements come with story progression and the collection of B.I.N.K.E.Y. 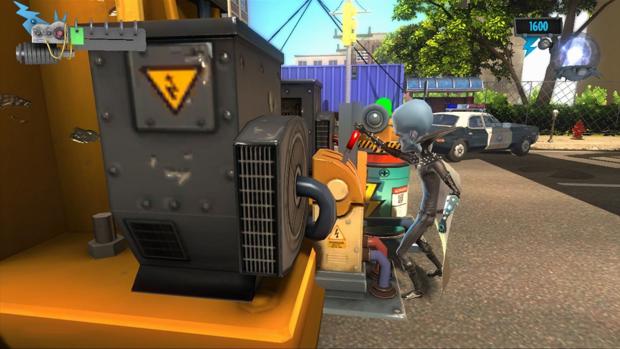 Graphics are bad. Multiplayer is bad. Game is bad.

Overall, Megamind: Ultimate Showdown is a poor game. The lack of anything innovative makes it just like all the other throw-away movie-based games currently on the market. This is only one to purchase if you’re an achievement junkie, or for your kid brother, and even then you should think twice.

Final Verdict:
BAD
More throw-away movie tie-in garbage made to squeeze just that little bit more cash out of the IP.
A copy of this game was provided by Developer/Publisher/Distributor/PR Agency for review purposes. Click here to know more about our Reviews Policy.