Metro 2033 is a post-apocalyptic Action game, incorporating elements from the First-Person-Shooter (FPS) and Survival Horror genres. It was developed by Ukraine studio 4A Games & published by THQ; and is available on Microsoft’s Xbox 360 & Games for Windows Live platforms. THQ later agreed for the game to also be available for download via Steam; but there are currently no plans to release it on PS3. Several founding members of 4A Games worked on ‘S.T.A.L.K.E.R: Shadow of Chernobyl’ at GSC Game World, and there are similarities between the two games. Indeed, Metro dwellers that travel to the surface in order to scavenge are referred to as “Stalkers”.

Metro 2033 is based on the novel of the same name by Russian author Dmitry Glukhovsky, and copies of the book have cameos at various points in the game. The plot is narrated at intervals by the player character, Artyom, who is seen in the opening cinematic writing about his experiences, as well as during cut-scenes and FMV sequences. In many of the latter, the player is free to move about and act, and sometimes will not be able to continue unless they act according to the flow of the events around them (such as taking a postcard from an NPC when it is held out). 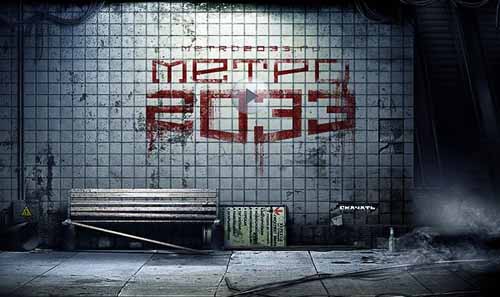 Metro stations: You’ll be seeing a lot of these.

The game is set in and around the Moscow Metro system. In a post-nuclear world, the surface is blasted and barren, so humanity (Or at least the Moscow enclave) have retreated underground.  The player character frequently sees maps of the metro on his travels. However, decay and politics means that traversing the entire system is not only difficult, but fraught with danger from both ‘mutants’ and opposing factions.  Opposition that the player encounters include: “Reds” – Soviet Communist survivors, “Nazi’s” – fanatical neo-Nazi survivors, and voracious (not to mention hideous) mutants. Artyom often encounters belligerent station sentries who will try to detain him, as well as other NPC’s who will offer the player karma choices. These choices are not all forced: indeed I managed to accidentally miss one and was stumped later in the level before I realised what had happened. As you might expect, the player’s actions in these choices will determine whether the default or hidden ending is played at the completion of the game.

The game’s world is one of scarcity, where the player will rarely have as much ammo as they would like, and mêlée weapons are standard adventuring equipment. The player is given a knife at the start of the game, and later on can find/purchase additional throwing knifes for use in ranged combat. Available weapons also include Shotguns, Revolvers, Sniper Rifles, Assault Rifles, Sub-Machine Guns, Pneumatic Arrow ‘Launchers’ and Grenades. Most weapons can be found or bought in different variants (e.g. a double-barrelled shotgun or an automatic with drum magazine) but only one variant of each weapon may be carried at a time. There is no option for external storage, so players must chose which weapons and variants they carry carefully so they are prepared for the situations the game will throw at them. Players are able to swap weapons in/out on the fly if they find an enemy has a better version than their currrent one, but generally better weapons must be bought in stations.

The player must also contend with the environmental hazards present. These include radiation belts, which the player must wear a gas mask to pass though, poisonous/corrosive water which will kill the player with only a slight touch, and many, many holes/crevices which will kill the unwary player following a fall down one of them. In keeping with the scarcity theme which runs throughout the game, the player’s HUD is minimal, with only ammo, filters and med-pack counters shown as default (the crosshair has to be toggled in the options menu). There is no conventional health meter – instead, the player’s remaining health is indicated by the presence of an audible heartbeat and blood on the screen. The inventory system only appears when the player cycles through it to change weapons, and is minimal also.  A nice touch is the ability to change the inventory type between Linear (change weapons using L and R on the D-Pad) and Circular (hold Y and select your weapon using the Left-Stick) via the options menu. 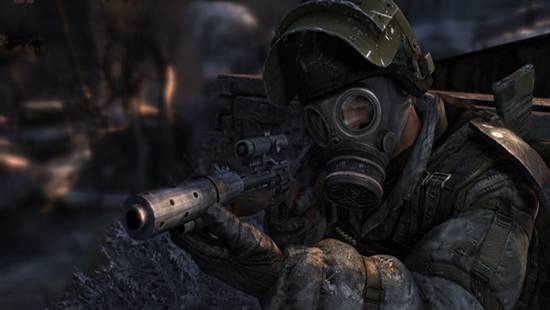 The gas mask is an integral part of gameplay

Another interesting feature of the world in Metro 20233 is the economy: driven not by money (which at any rate has lost its value following the end of the world as we know it), but by pre-apocalypse bullets. These have great value, as apparently they were produced to standards now impossible to attain. However, this also means they are much more powerful than the ‘dirty rounds’ manufactured by the Metro dwellers. The player must manage his resources carefully to strike a balance between having enough currency to attain needed supplies and having enough firepower to take-down tougher enemies. Pre-apocalypse rounds can be traded for larger quantities of dirty rounds at special kiosks found in metro stations, and the reverse is also possible.

The combat and movement controls operate on the same layout as many FPS Xbox 360 games (A to jump, B to Crouch, X to Interact, etc) so experienced players will have no trouble playing the game. However, as the game plays somewhat like an interactive-novel, certain sequences can be a bit clunky. As mentioned previously, at certain stages in the game the player must perform a certain action to continue the event(s) around them, and this is not always obvious. The process of viewing the current objectives/compass (these are both incorporated into Artyom’s journal and there is no map) involves three separate button presses and renders the player unable to fight whilst viewing them. However, one button press will return the player to combat stance.

The player must also periodically charge their flashlight to prevent it going out: this is accomplished by equipping the ‘Universal Charger’ you are given at the start of the main game and rapidly pressing Right Trigger. Again, whilst doing this the player is vulnerable to enemies, but is able to accomplish this whilst still having the flashlight turned on. Quick-time events also make an appearance – if you are knocked down by an enemy, rapidly pressing X when prompted will provoke a short FMV sequence of Artyom fighting for his life before returning to his feet. 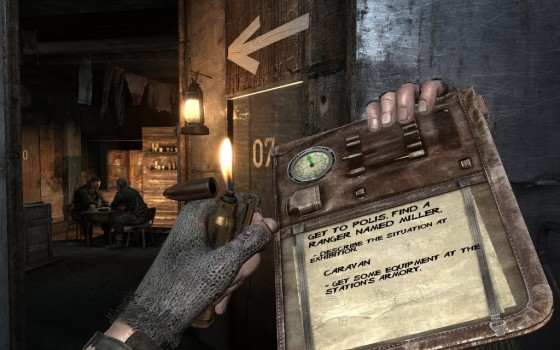 The Compass & Journal – You will come to love and hate them in equal measure.

4A Games have done a great job of bringing to life the world described in the novel. Light is almost entirely dependent on flickering lamps, glowing flashlights and sparking fuse boxes, so shadows are rich and well-implemented. Despite later obtaining Night-Vision Goggles, the ambient light from fires and other sources can often render them useless for lengths of time. The fact remains that the player is often restricted to only being able to see clearly what’s in the beam of his flashlight; combined with the atmospheric use of ‘environment sounds’ such as groaning pipes and scuttling footsteps means that the player is almost immediately sucked into the world of Metro 2033. This happens to such a degree that, whilst playing the game, I began to feel relieved when I reached the comparative safety of each station, before venturing out into the dangerous darkness once more.

Music is largely restricted to stations only, and the player may only change the track being played (on a cobbled-together record player) by paying a fee of one pre-apocalypse bullet. This adds to the game’s attempts to faithfully reproduce the novel, although may be jarring to players more used to being able to pick and choose the music played. Custom Soundtracks are supported, although to choose your own music over the game’s sound would destroy the atmosphere which so much effort has clearly gone into creating. A nice touch is the ability to switch the character’s voices between Russian and English – not just accent, but literally having them converse in Russian. Doing so will necessitate the toggling of Subtitles, unless the player is fluent, but adds immeasurably to the atmosphere of the game.

I really enjoyed playing Metro 2033, despite some occasionally inconvenient controls. The scarcity regime which has been implemented is thought-provoking, and player’s who are not averse to occasionally having to consider how they are playing the game will relish it. That said, if you prefer gunning down everything in sight, you may quickly find yourself having to fend off hordes of slavering mutants with only a knife for company. Another slight annoyance is the uselessness of some of the AI in the NPC’s, who should not be heavily relied upon in combat as they are frequently over-powered by enemies and need rescuing.

Overall, Metro 2033 is definitely to be recommended.

If you prefer gunning down everything in sight, you may quickly find yourself having to fend off hordes of slavering mutants with only a knife for company.

A copy of this game was provided by developer/publisher for review purposes. Click here to know more about our Reviews Policy.
Tagged With: Metro 2033, pc, Steam, thq, xbox 360