I’m a big fan of Nintendo. I eagerly await every single instalment of their core franchises, and whilst I’m sometimes disappointed by what I receive, I never hold it against the big N. That said, I must admit that they’re certainly a company who play a very safe game. In fact I’d go as far as saying that sometimes they really need to grow a pair. Within their main series’ the only thing that ever changes over the years is the odd graphical style (why, Wind Waker, Why?!) I’m not sure then if it’s the influence of Team Ninja on Other M’s development, or if the big wigs at Nintendo have finally decided to man up, but Metroid: Other M has more new focus shifts and gameplay ideas than I’ve seen in a Nintendo game for a long time and the risk has been its own reward.

Right from the word go Other M is playing with fire. It’s set right after the events of the classic Super Metroid, where Samus intercepts a distress signal from a research station codenamed Baby’s Cry. It reminds her of the sacrifice of the baby Metroid from the end battle with Mother Brain in Super Metroid, and so she flies in to investigate. Once there she meets up with Adam Malkovich and his team of Galactic Federation soldiers, who Samus once served with in her youth. It’s through these characters that a large part of Samus’ back story is revealed, and the new introspective focus of the narrative is easily noticeable due to the regular internal monologues and flashbacks used to tell the story. A pretty daring move, considering our lovely heroine has had only a handful of lines since the original game in 1986. It certainly has taken Other: M in an interesting new direction, one that has clearly paid off. Our protagonist has never felt so well fleshed out, and I haven’t been as engaged with a Nintendo franchise in a long time. It certainly helps drive the plot forward, and the story already has enough intrigue and twists and turns to make it a very easy sell. It must be admitted though that there are a few pacing issues with the story. It takes a little bit of time to warm up and, even though the epilogue chapter is classic Metroid all over, the actual ending just before the credits felt a little limp. In spite of this small blemish, a personal narrative of this magnitude is a new direction for the series to take and I certainly hope that this direction may translate to other popular Nintendo franchises. 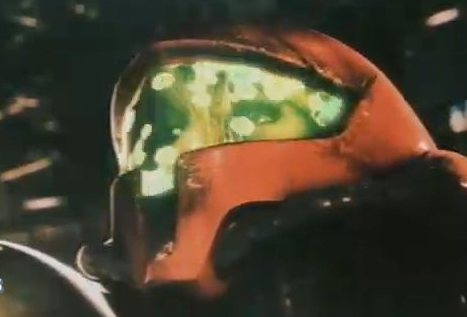 The gameplay too is refreshing, mixing up both the side-scrolling action of the older Metroid games and the FPS action of the Prime meta-series. The game primarily plays out from a third person perspective and is controlled holding the Wii remote on its side like a NES controller. I’ve never been much of a fan of using the Wiimote in this way, but with Other M it really works and gave it that old-school original Metroid feel. It felt like going back home and really put a smile on my face. The twist comes in that, when you point the remote at the screen the game camera shifts to a first person viewpoint, allowing more intricate analysis of your surroundings. It’s sometimes also required to use some of Samus’ abilities like missiles and the grapple beam.

Other tweaks have been made to the way the game plays, including the use of melee attacks (certainly the Team Ninja influence coming through there.) Once you fully charge Samus’ beam you can melee a foe by either jumping on them or by moving close to them while they’re down. It works well and looks pretty stylish, though jumping on top of enemies can sometimes be a bit fiddly and feel imprecise. Another interesting feature is the concentration mode where by lifting the remote vertically and holding A, Samus can recharge her stock of missiles. Some fans may feel this makes the gameplay too easy, but it’s well balanced out when you consider that you need to find a safe place to do this move where you won’t be interrupted. 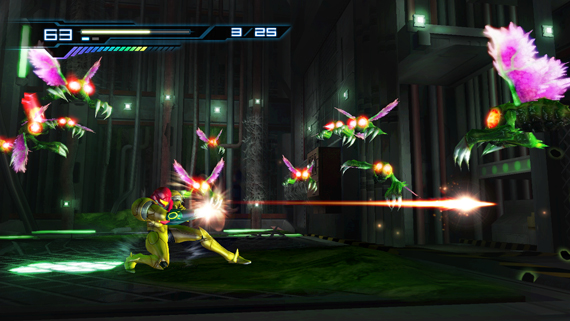 With all these changes to the formula, it’s easy to feel concerned that the core mood of the Metroid franchise might be lost. Generally speaking this isn’t the case. Despite the inclusion of the Galactic federation team who regularly aid Samus, Other M does a remarkable job of evoking the same feeling of loneliness and isolation that has always characterised the Metroid series. One problem I did have with the new direction though came in how the acquisition of power ups was handled. Upgrades such as energy tanks are collected as always and are still fun to track down, but the upgrades needed to access new areas like the grapple beam or super missile aren’t obtained in a way that I felt did the series’ mechanics justice. Whereas in previous games in the series you had to solve a big puzzle or fight a large boss enemy to find the new ability, in Other M they seem to just sort of happen. Rather than robbing Samus of her skills at the beginning of the game and forcing her to acquire them again, in Other M the idea is that Samus has all the abilities but disables them until she is authorised to use them by commander Malkovich on account of her respect for him. It’s roped into the plot reasonably well, but at certain points it started to just plain annoy me. When shit hits the fan, you generally don’t wait to ask if you can use a cloth to clean it up. There were times when I was knee deep in lava dying slowly wondering why the hell he wouldn’t otherwise the damn Varia suit. It’s a slight misfire in that respect, but once more it’s a small dark spot on a game that fits extremely well into the Metroid franchise. 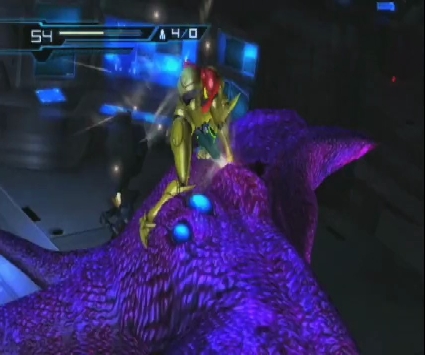 The presentation is also a high point of the game, particularly in terms of the visuals. They just ooze quality and, whilst I usually do a lot of hating on the Wii’s visual capabilities, I truly can’t be critical of the graphics in Other M. They generally hit the spot with smooth and varied textures, awesome animations and a general level of polish that only Nintendo seem to be able to apply. It’s just a shame that some of the effects are a mixed bag, ranging from the cool holographic features on some of the levels to a few explosions that look a little too N64 for my liking.

Sound is something that Sci-fi themed games tend to botch, but Other M manages to escape this particular trap. The over-use of dodgy synthesisers has become synonymous with Science fiction gaming, (Mass Effect I’m looking at you!) but Other M manages to use a sparse orchestration effectively to create a barren and nihilistic mood. The voice acting also deserves credit, as my concerns for effectively voicing such a classic character as Samus Aran were immediately put to rest the moment she opened her mouth.

It’s a shame that such an enjoyable experience wound up being a relatively short lived one, at least it was in comparison to other games in the series. Without going for all the upgrades my play time clocked around roughly eight hours, though you can expect to see this go up if you wish to track down the elusive 100%. It’s a shame that the game couldn’t have been a few hours longer, as it’s hard to justify paying full price for such a short ride, but when all is said and done you can’t put a price on such a quality game.

Metroid: Other M gambles with some new gameplay mechanics and a refreshing story-driven narrative. It’s a game I cannot recommend enough to both fans of the series and anyone looking for a new experience on the Wii. It’s just a shame it couldn’t be a bit longer, but it is a subtle and enjoyable title that gets better with every play-through, as opposed to lesser contemporary titles that rely on cheap kicks and little substance. Nintendo are trying new things for once, and they deserve support in this endeavour. Other M is probably one of the strongest adventures on the Wii and one that is worthy of your time, but for those who are new to the franchise you may be better going for an earlier title in the series until the price comes down on Other M.

More introspective narrative structure is refreshing, Unique gameplay ideas, Feels like the more retro Metroid games, Finally a game for the hardcore audience on the Wii

A little bit too much back-tracking, Some odd pacing issues, Not quite as long as other games in the series

Final Verdict:
EDITOR’S CHOICE
The adventures of Samus Aran continue on the Nintendo Wii with Metroid: Other M, a game that successfully fuses gameplay elements from both the 2D Metroid games and the more recent Prime trilogy, all within a more story driven structure that seems to be a first for a core Nintendo title.
A copy of this game was provided by Developer/Publisher/Distributor/PR Agency for review purposes. Click here to know more about our Reviews Policy.