You know those games that can not only recall the good old days, but actually bring you back there? They don’t have to exactly be master classes in game design, but they have a certain charm to them that bends those pesky laws of time and space to bring you back to being that young child playing with toys in the garden, or kitchen, or bedroom.

Micro Machines: World Series is that kind of game, flawed deeply with charm despite itself. I can’t help but love the art design and imaginative locations that bring you into that feeling of being a kid again, whipping your little cars around the attic workbench and sending them flying down the stairs or into each other. There’s a childish cohesion to the chaos and that is where the game shines the most. 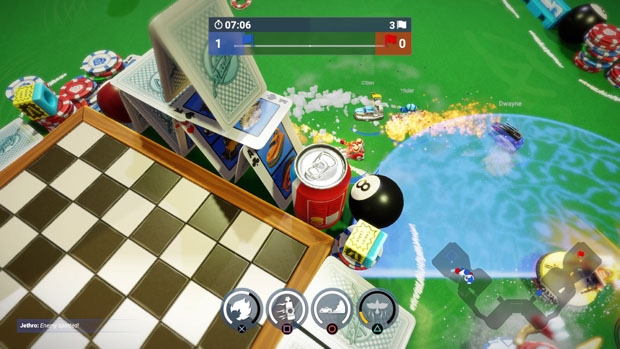 "Micro Machines World Series feels slippery and like you never quite have full control."

World Series takes the form of a top down racer, mimicking the viewpoint that you have playing with the physical toys. They have all the control of a toy car too, which is to say not much. In contrast to Mantis Burn Racing which nailed the control but lacked almost everything else, Micro Machines World Series feels slippery and like you never quite have full control. You’ll point yourself around the 10 tracks or 15 battle maps and love the fun and varied locations, but frequently I became frustrated when I didn’t nail a turn quite like I felt I should have, watching other cars rocket ahead of me.

There is no single player championship to speak of in World Series, instead going all in on the online modes of play. Micro Machines World Series does smartly keep you from waiting in the menu too long by filling out slots in any game type with bots should no humans be around, and can drop some in mid match as they join.

The bots might be a little too smart, with no option to change the difficulty. They seem to be able to stick pretty close to the racing line and have nearly flawless aim with the weapons. Playing with other people such as the colleague I had cohered into this with me, does mitigate the problems somewhat as they’ll also be fighting the controls to various degrees, bringing the game more in line with the casual zaniness that it’s aiming for. 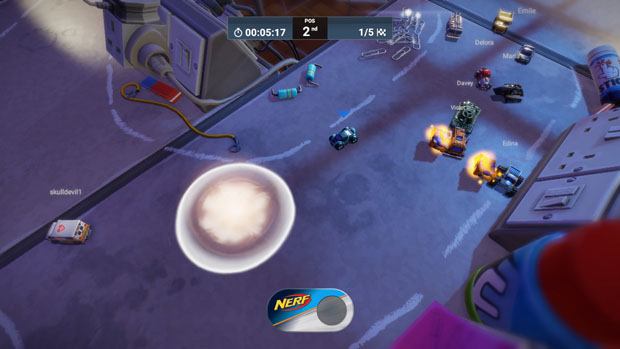 "Battle mode shares the same inventive location designs such as a garden or the drone workbench, and opens them up to wide flowing arenas"

Racing around the courses plays a lot like a Mario Kart, where you’ll do your best to stick to the best racing line while dodging and using a handful of fun, Nerf branded items such as gattling guns and squeaky hammers. Shortcuts can be found on each track, though items play no part in accessing them so once found they really just become the defacto method of racing.

Battle mode shares the same inventive location designs such as a garden or the drone workbench, and opens them up to wide flowing arenas with multiple paths and shortcuts that can launch you to key points. There are team deathmatch, king of the hill and bomb delivery modes which all change up the game in a few ways. Instead of relying on the same items, the 12 different vehicles are all outfitted with different load outs, including an ultimate earned by completing the goal and destroying enemies.

This does allow each vehicle to fit into its own niche, the ambulance is the healer, the tank is…the tank, the hot rod is the quick damage dealer, ect. Unfortunately the same controls issues hamper the otherwise excellent battle experience way too much. The quick movement that the battle mode asks for you to dodge enemy fire or quickly spin around to the objective or catch the moving bridge just isn’t a possibility and the struggle makes the entire mode more frustrating than it needs to be. 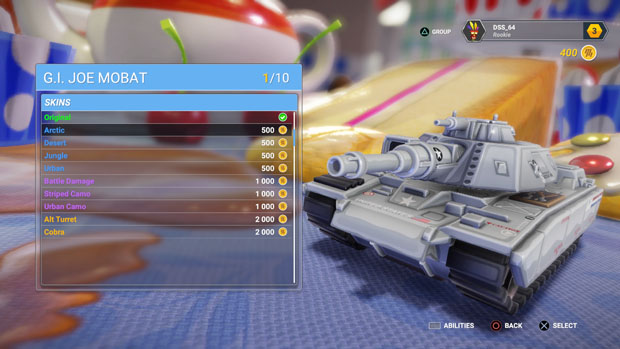 "you’ll level up for what bragging rights might be there, in game currency and of course loot boxes, because they’re the new scourge of gaming in 2017."

What is there to earn from participating in the online only shenanigans? Beyond the fun of seeing the different arenas and their environmental hazards such as the Hungry Hungry Hippos board, you’ll level up for what bragging rights might be there, in game currency and of course loot boxes, because they’re the new scourge of gaming in 2017. All of this to facilitate cosmetic changes you can apply to the 12 playable vehicles in the game, which is fine in and of itself, but doesn’t give the game an overarching sense of progression like unlocking new racers. You’ll have seen everything World Series has to offer within the first few hours.

Micro Machines: World Series has such inventive environments and a striking art design to bring it all alive, it’s really just a shame that the act of playing it isn’t all that fun thanks almost completely to loose controls. The online focused game is currently already nearly dead, removing the little worth the game had unless you want to talk friends into buying this somehow, just know that when we did that, it wasn’t much fun.

This game was reviewed on Playstation 4

Art style and design bring the feeling of playing with toy cars to life in the most adorable way. Unique stage designs and gimmicks give them personalities that feel distinct.

The slipperiness of the controls basically ruins the playing the game part of the game, and you fight against them to do the simplest things. AI is super unforgiving with no options to tweak it. There’s also nothing tangible outside of skins and cosmetics to work toward or a single player of any sort.

Micro Machines: World Series has the presentation nailed and feels like playing with toy cars again. However, once the glitter of that presentation wears off you’ll find a game that controls way too loosely to give any kind of satisfaction and more frequently provides frustration, and furthermore nothing to really incentivize you to push beyond that without anything to unlock. To paraphrase the Micro Machines Slogan, “If it doesn’t control good, it’s barely worth playing.”

A copy of this game was provided by developer/publisher for review purposes. Click here to know more about our Reviews Policy.
Tagged With: codemasters, Just Add Water, Micro Machines World Series, pc, ps4, Xbox One