After two and a half decades since the start of the much-loved franchise, Black Hole Entertainment brings the epic world of Ashan back to life with Might & Magic Heroes VI.

Taking place some 400 years before the events in Heroes V, it tells the tale of a defeated Archangel general returning to life for retribution. Under the premise of withstanding an invasion by the demon armies, he regains his powers and unites the various factions before all hell kicks off, having heavily underestimated the heirs of the Griffin dynasty. Thus, in typical Might & Magic style, it’s down to you to negotiate vast and varied terrains, searching for resources and treasures, as you build cities and grow your armies. 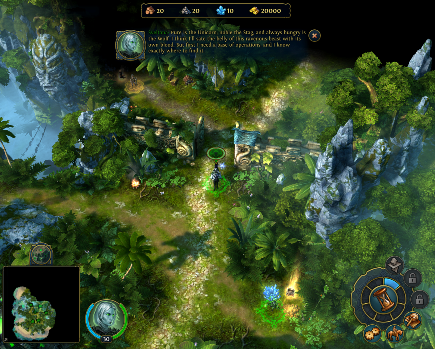 There are too few turn-based strategy games nowadays in my opinion, and Heroes IV sets a benchmark for the oft-neglected game mechanic. Although the pacing of some of these games can be criticised for being slow, there’s actually very little time to sit back and take everything in, as you’re constantly facing pressure to get on with it or face an untimely confrontation with a stronger enemy force.

After a weighty download through a Uplay account, the menu screen leads you to the campaign or local and online multiplayer modes. It’s a really comprehensive package, so once you’re done with the lengthy – and tough – main story, there are skirmish maps and copious opportunities for battles to keep you going and test your mettle.

First impressions are positive; the animations for the world’s inhabitants are great to watch but ramp up your graphics settings and the whole thing looks sublime;  it’s a real leap forward from the previous games in terms of detail. Zoom in and it all looks awesome, the crisp graphics really help to draw you into this fantasy world of orcs, griffins and ghouls.

What’s more, the sounds, effects and music are superb too and perfectly match the pace and ambience of the game. Animated intermissions progress the story but, while the voice acting does an adequate job, it isn’t great – but is skippable. 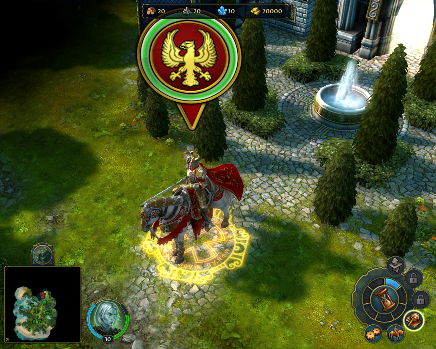 The five factions all have very different characteristics and attributes

As the story unfolds you’ll come across five very different factions: Haven, Inferno, Necropolis, Stronghold and the new guys, the Sanctuary. Your Hero will not only be exploring the absolutely huge game map, but he’ll be spending time taking on a plethora of demonic beings, scavenging and liberating towns. By collecting wood, crystals, ore and gold your forces can be expanded and structures built in your settlements. Equipping magical items called artifacts allows you to strengthen your armies and improve their attributes. The new reputation system – Blood and Tears – affects your destiny and how your character evolves. It’s up to you whether you opt to take the path of aggression or compassion.

Attack an enemy and you’re transported to the gameboard battle screen, a turn-based affair where you face off against your opponent – your characters and creatures on one side, his on the other. Each figure represents a stack of units, the aim being that you whittle down the enemy’s units before he eradicates yours. The combat is self explanatory and instantly gratifying, although to truly master the best strategies takes time. Entering a battle certainly requires some degree of skill, as you switch between managing long range attacks such as archers with close combat troops sporting melee weapons. Alternatively, you’ve also got some nifty magical attack moves that can be accessed through your trusty spell book. After a fight, there’s the option to replay it, which can prove quite addictive as you try to improve your strategy and minimise your losses. 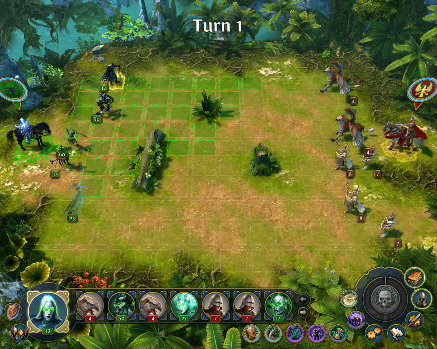 Battles are fantastic – but make sure your armies are strong enough!

A victory sees you increase your XP and allows you to raise your damage, healing, summoning and absorption spells to become more powerful. You can spend points on your ability tree to improve your skills.

There’s lots of clicking windows and menus in this game, which although easily accessible takes a while to get to grips with. Thankfully, various hints and auto settings do help you along the way and make a novice’s tentative steps into the world of Ashan a little less treacherous. From the onscreen display you can access your quests, spell book, turns and access your inventory.

As the population in your settlements increase you can recruit new units. Bear in mind though, that as you build up your armies, so too do the enemy forces. Spend too long on a certain objective or investigating your surroundings and you’ll most likely be swamped by opposing forces – trust me, I learned the hard way several times… I witnessed my seemingly unbeatable army hacked and slashed to pieces with ease.

Fans are typically wary when a developer says the next addition to a beloved franchise is going to see changes but it’s safe to say there’s little to worry about. There’s plenty to love in Might & Magic Heroes VI – from the enhanced visuals to the reputation system.  Although some gamers on the forums have been criticising the game’s DRM and several bugs, this isn’t unbearable assuming you have internet access, while patches will no doubt fix any lingering glitches over time. Personally, I enjoyed venturing into this mystical world, and would suggest that there are many happy hours to be spent discovering every inch of it.

Lovely graphics, especially on the higher settings, and loads to see and do. Should keep your attention for many hours

Can be a little tough and unforgiving. Not exactly a fast-paced action game so be wary if that's your preference. There are a few gripes about the DRM.

The long-running turn-based strategy series is back and it's looking better than ever. Fans will love the depth, newbies will like the fact it's easy to grasp - it literally takes minutes to learn but ages to master

A copy of this game was provided by developer/publisher for review purposes. Click here to know more about our Reviews Policy.
Tagged With: Black Hole Entertainment, Might and Magic Heroes VI, pc, Ubisoft