CompuExpert were generous to send use a complimentary sample of Mionix Naos 500 Gaming Mouse. With the market already saturated with gaming mice, is it really one of the best among the best? Read the review to find out. As usual we will divide the review in to three categories: Design, Functionality and Usability. So let’s get started. 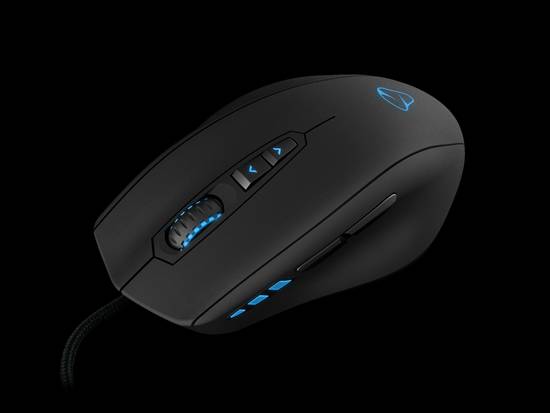 Naos 500: The best ergonomic design in the industry

The Mionix Naos 500 has easily one of the best ergonomic designs in the industry. The mouse is bulky and gives enough space for all of your five fingers to get a grip on the mouse, which could be so crucial in case of third person action games where precision and timing are important. The packaging is impressive and it consists of the mouse and an innovative weight tuning system. But I was really surprised by the lack of a proper instruction manual. However a short note book is shipped with the package but really that can’t be called as an instruction manual.  There is a lot you can do with the mouse which actually warranted a manual to be included. One of the best things that I really liked about the mouse is you can adjust the pointer speed just by clicking the up-down buttons provided on the face of the mouse. You can also customize the various parameters of the mouse by downloading the software from the mionix.net. There a tons of parameters that you can customize, which are divided in to a number of categories. Some of them are below:

As I had stated earlier, the mouse also comes along with a weight box. The box consists of 8 units of 5g each and can be adjusted according to each user’s needs. I personally did not use this since I found the mouse to be just fine without the weights. However, for some users this might be a good option. 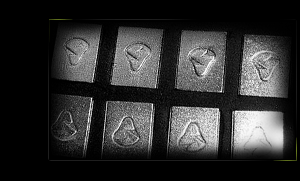 Innovative weight system can be a great option to some users

The design of mouse is indeed very innovative and well thought of. But how does it feel when we actually play a game using this mouse? For this section we decided to test the mouse on two different games. Alpha Protocol:  a third person action RPG and Crysis, one of the best shooters out there. Read on to know more.

I also think that if the two side buttons for right-left clicks could have been avoided. It was a bit of nuisance for me while testing out the games. Plus it would have done a world of good if the mouse was wireless. 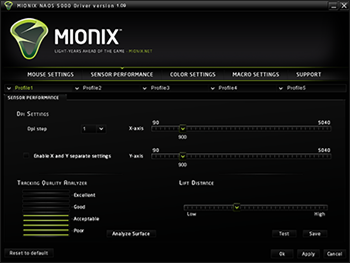 The software system is great, but can confuse users due to the lack of an instruction manual

The mouse is USB enabled, so you basically have to just plug and play. Advanced players can download the software and customize the mouse according to their needs. As I mentioned before, NAOS 500 would have been a stunning mouse if it was wireless. But again, it’s still an amazing mouse to stay the least. We did not checked the mouse on consoles, But I think the experience should be as good as on the PC, since its USB enabled.

Overall I think Mionix Naos 500 is a great buy. At $89.99, there are not too many better options then this one. We would recommend any PC gamer and especially fans of first person shooter to buy this. You can buy one right here.

One of the best ergonomic designs in the industry, feels light, software interface for controlling pointer speed and lift distance gives the user more control

Mouse is not wireless, the extra side buttons for right and mouse clicks can get irritating, No instruction manual provided

Final Verdict:
SUPERB
The NAOS 500 is one of the best gaming mice that should not be missed by any PC gamer.
A copy of this game was provided by Developer/Publisher/Distributor/PR Agency for review purposes. Click here to know more about our Reviews Policy.