Mirror’s Edge is a first person free-running game from Battlefield veterans DICE Studios.  There has been much skepticism about the game thinking the gameplay and controls couldn’t work.  Well they do and Mirror’s Edge is worth the money. Mirror’s Edge is about a runner named Faith who is trying to find out who framed her sister for murder.  While the story isn’t super deep, it does what it does well, with some decent looking 2D cutscenes.

Like I said earlier, gameplay was a big question mark leading up to the release of the game.  DICE has managed to nail it perfectly.  L1 (LB on 360) is jump and L2 (L on 360) is crouch.  While there are other controls, L1 and L2 are the main controls for running… which is most of the game.  They are tight and responsive and couldn’t have felt much better.  Then comes the combat… which is unfortunate.  The thing that makes combat in Mirror’s Edge is that you are not supposed to get into it.  However there are times when you are forced to N-GAGE (X-Play reference).  The part that isn’t so great about the combat is that, they have guns… and you don’t.  Sure you can pick up a gun after an enemy is beaten senseless  but, surprisingly from DICE, gunplay is not very good at all.  I don’t know if they did that because they want you to avoid combat as much as possible or what but it is not good.  There are some flashy melee attacks you have that work well but just try to run by guys as much as possible.

Many virtual cops were injured in the making of this game from kicks to the face.

Unlike the gunplay, the actual running part of the game is breathtaking.  Wall-runs, grabbing on to ledges, shimmying up a pole, edging across a narrow edge hundreds of feet above street level; you really do get a rush.  It really needs to be experienced first hand but just know that running and jumping from rooftop to rooftop is incredible.

The artstyle in this game is striking.  Instead of the grays and browns that many recent games have adopted, the world of  Mirror’s Edge is mainly clean-cut and white exteriors with single, solid colors on the interiors.  Red is very important as it shows you where to go next (the option can be turned off).  The graphics are all very good with the exception of a few jaggies on the character models.

Ambient music plays a huge role in Mirror’s Edge and works very well.  As you’re running, the music will be quietly on all of the time, sometimes changing to louder more dramatic music during battle scenes.  The sound effects for the guns and soldier speech is good and you can hear Faith panting and grunting if she has been running for a long time or hits a hard landing.  All of the voice acting is also extremely well-done as well.  Overall the sound in the game is fantastic. 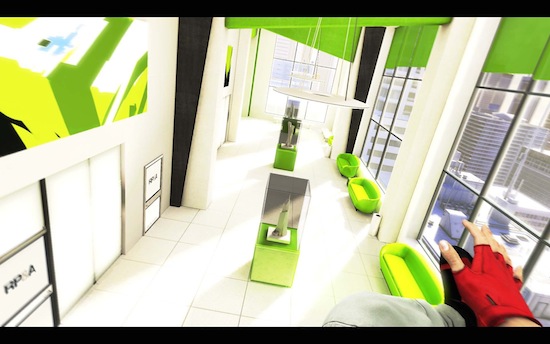 The artstyle is fresh and looks very nice.

One of the biggest gripes one could have about the game is that it is a little bit on the short side.  There are only nine chapters in the game that take anywhere from 25 minutes to an hour to finish.  Sometimes it can take longer than that if you get stuck which will probably happen a few times which can get very frustrating. There is also a time trial and speed run mode where you can get ghost data from the best in the world and learn the best routes to get you through the level the fastest.

Overall, Mirror’s Edge is a huge risk that pays off for Electronic Arts and DICE.  EA has said that this is the first game of a trilogy so there will definitely be time to iron out the few problems this game has.  There are without question many good games coming out the last few months of 2008 and this is one of them.  This is worth the money.

Intuitive controls, gaining momentum and stringing together moves throughout a level is extremely satisfying, artstyle is unique and eye-catching, the music is relaxing and complements the game very well

Criminally short single-player experience, combat can be frustrating especially at certain points where the player is forced to fight, some aliasing problems

Final Verdict:
SUPERB
Mirror's Edge is a brave foray into a new genre that pays off for DICE and EA in a stunning and very fun package.
A copy of this game was provided by Developer/Publisher/Distributor/PR Agency for review purposes. Click here to know more about our Reviews Policy.