Monster Boy And The Cursed Kingdom Interview: A Big Adventure In A Magical World

FDG Entertainment spoke to Gamingbolt about their upcoming game, Monster Boy and the Cursed Kingdom.

By all means, Monster Boy And The Cursed Kingdom is the latest entry into the beloved Wonder Boy series. In fact, the creator of the Wonder Boy series, Ryuichi Nishizawa has also worked with the team to bring this new game to life. The game plays very similarly to previous games from the beloved franchise while also adding some fresh ideas.

To learn more about the game and its development, Gamingbolt reached out to FDG Entertainment’s Philipp Döschl who answered the following questions. 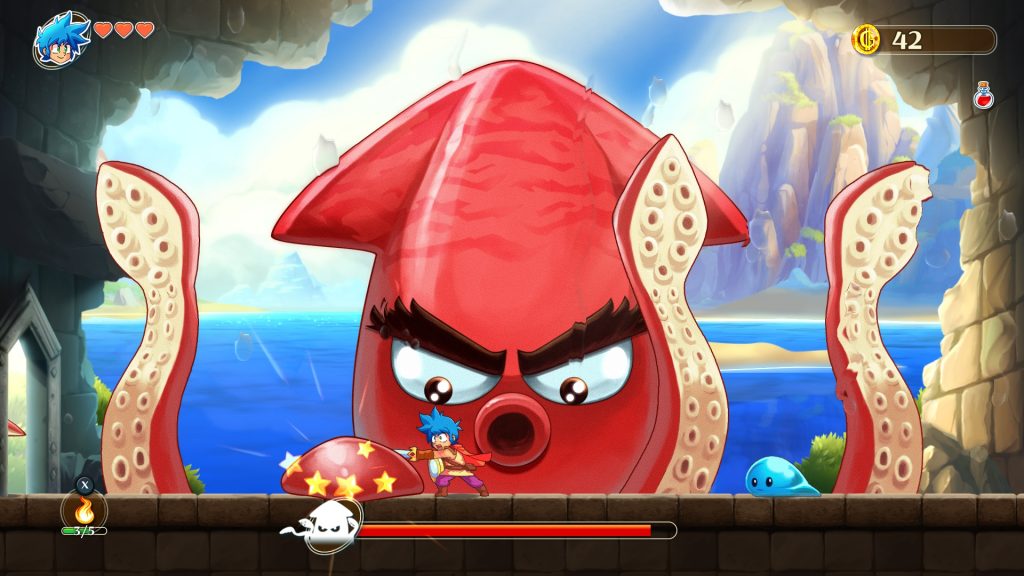 This is a game that is being made in a close collaboration between FDG Entertainment and Game Atelier. Any particular benefits or challenges faced because of the way things are set up?

Of course it’s always a bit difficult when the teams are based in multiple locations. However we’re used to it and luckily both Game Atelier and us are in the same time zone, which helps a lot. Probably one of the biggest benefits of working with a studio in France is how fast you can find talented people for a short period of time to prevent production bottlenecks. When it comes to this, France is a lot more flexible than Germany.

As a game directly inspired by the Wonder Boy games, is Monster Boy also aiming to carve out its own unique identity?

It’s officially part of the Wonder Boy of the Wonder Boy series and the creator of the series, Ryuichi Nishizawa, is on board, so it’s more than just a game “inspired by”, it’s a real sequel to the series. It shares the same vibe while bringing in lots of modern and fresh elements.

The game has spent a long time in development now. What is the reason for such a long development period?

The game grew significantly since we got on board. The most obvious changes are the graphics which were completely reworked a couple of times in past four years. Check out this comparison: 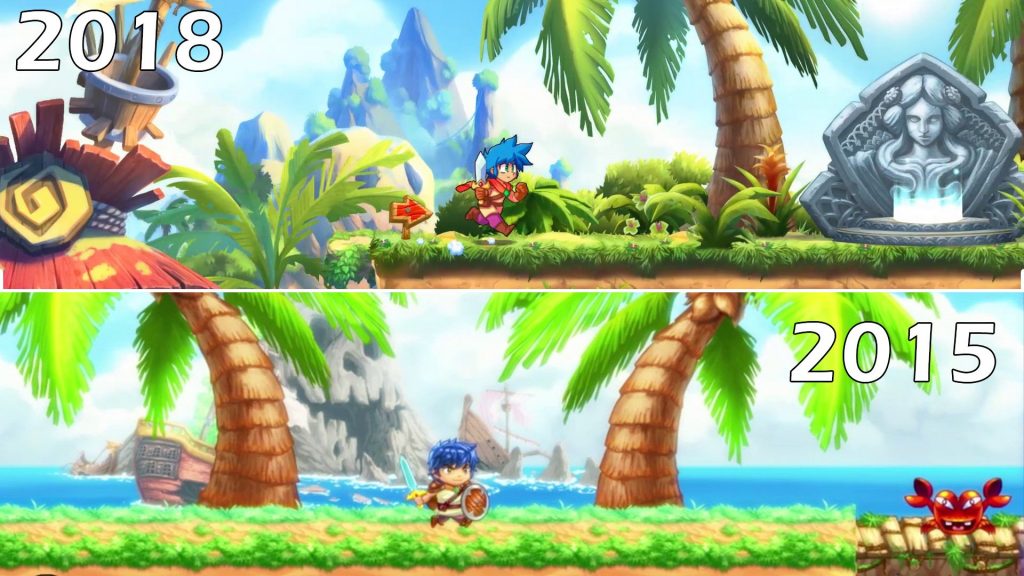 "The gameplay also got more complex, many mechanics were added, the game got a lot more depth and much more. Development on Monster Boy is a very dynamic and organic process, which makes it a bit more challenging to plan in advance. We take our time and tweak everything until we’re satisfied with it. We want to deliver a great game which people will remember for the next decades."

I’m sure bringing in Ryuichi Nishizawa must have been beneficial to the development process. Can you elaborate some ways in which his experience proved useful?

Nishizawa-san gives a lot of valuable feedback. He’s not involved in the project on a daily base, but he’s close to the project, sharing his views on things.

Will the game have a huge emphasis on story, or is it mainly there to serve the gameplay?

We’re all a bit sick of games that feel more like interactive books because there’s so much reading. Story is an important part on Jin’s journey through the Cursed Kingdom of course, but gameplay and especially its variety is even more important. We now got the perfect balancing between and engaging, motivating story and a diversified gameplay.

Can you tell us some of the ways in which different animal forms are used in the game?

Every transformation has its own mechanics. The pig can’t equip weapons, armor, etc, however it can cast magic, which the other forms can’t do except for the human form. Plus the pig can sniff and find secrets. The frog in return can equip stuff but can’t cast magic. He can use his tongue to reach areas only reachable by him, swing through levels, and so on. I won’t spoil all of the forms now however 😉 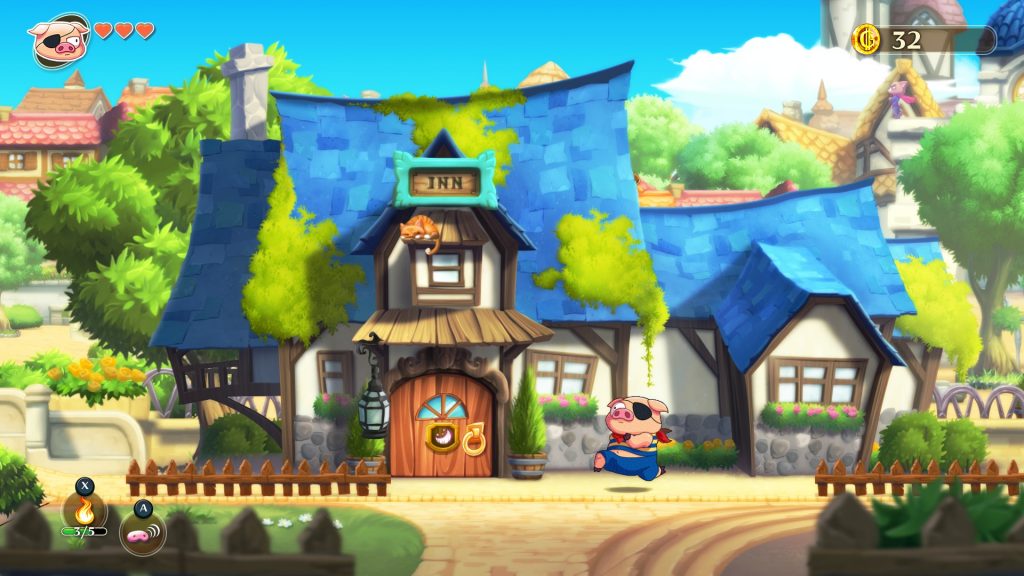 "We now have an amazing depth in the settings, hand drawn animations for all characters and enemies, effects done through shaders and tons of details and other things."

Having worked on this game for so long must have been exhausting. Are you going on a break for a while or do you already have ideas for a new game you want to start working on?

There’s no real break for us at FDG, we already have new ideas and a new prototype is about to leave prototype stage and go into alpha 😉 Of course we’ll all have some time off and holidays here and there, but we won’t close the studio before our annual holiday break around new year. Things might be different for Game Atelier though as they’re working really hard and focused in order to get the game finished in time.

The game’s art style is unique and balances a fine line between retro and modern. What was the inspiration behind the art style?

It was a very organic process until we reached the final art style. The overall graphic quality got higher with every iteration and we kept on saying “damn, it’d be cool to add this and that…”. We now have an amazing depth in the settings, hand drawn animations for all characters and enemies, effects done through shaders and tons of details and other things.

There’s not a single source of inspiration but rather multiple ones, especially on the technical level and how different techniques were used and combined to create the world, the effects, tricks and how to make it look even more appealing over all.

There has certainly been a resurgence in retro-themed games recently. What would you say you love about games from the ‘80s and ‘90s which has inspired Monster Boy and the Cursed Kingdom?

The sense of going on a big adventure in a magical world. Back in our childhood when we played the Monster World games on Master System and Genesis, it felt like we went on a trip into an unknown land with secrets hidden behind every stone. Also, once we started playing, we didn’t want to stop and kept going on till we finished the games.

Can you tell us about any differences in the way the game will perform on various platforms?

There will be no differences.

I doubt it’ll have a big impact as we all need time to adapt (customers as developers alike). Of course the bigger devs will make use of the additional memory.

As for graphics, the more details you show, the longer it takes to create them, which makes the production costs go higher and it needs more time. Smaller studios will not be able to afford this.

It’s natural that games look better year by year and that they demand more resources, yet the tools used need to be ready for that too. And last but not least, there has to be an installed hardware base that’s big enough to justify the amount of additional work.

Thanks for the amazing support so far, the kind words and the countless people having checked out Monster Boy at events so far! Finish line is in sight and we can’t await to release  the full game!