Solid, but little more, all the way around the track.

Remember when sports games were allowed to be weird? Not just arcade-y, but like actually strange? When there was no standard control scheme, and one publisher didn’t control all of the rights to a certain league, and there were cheat codes, and odd little minigames you could play? Remember when you could pick one up and just play it and do reasonably well? Seems like a long time ago, doesn’t it?

Somewhere along the line, sports games became obsessed with realism and everything else that wasn’t going offer itself up upon that altar (or weren’t going to made you absurd amounts of money by selling you card packs) just kind of died. The big games aside (Madden, FIFA, etc), an entire genre fell into a niche and never really climbed out. It’s neither inherently good nor bad, but it’s worth noting how samey so many sports titles feel now, even the ones in genres you might be unfamiliar with. 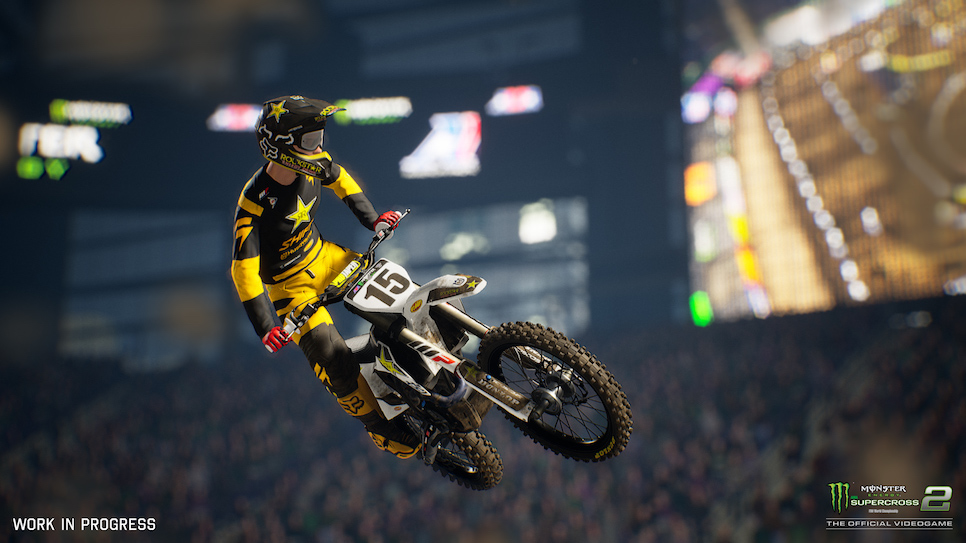 "Once you start turning off the assists and have to figure out how to shift gears properly, how to use a scrub to take a jump, and how to actually race without the game’s finger on the scale, things get wild."

Monster Energy Supercross 2 isn’t an exception. Despite its name, none of the playable characters have monster energy (I can only assume this is like having tiger blood or dragon energy) and the drink itself is largely absent from the proceedings. The former is kind of a bummer, and the latter is a bit unexpected since Monster has sponsored the entire supercross league since 1974. For those of you who are reading a review of a sports sim with absolutely no knowledge of what the sport in question is, supercross is a motorcycle race where riders careen around coiling dirt paths and navigate jumps of all heights to get into the lead, and Milestone, who is also known for developing Superbike and the MotoGP series, does an admirable job of capturing the intricacies of the sport.

This also means that the game is pretty complicated. You have to manage your direction, speed, and weight distribution at all times, lest you wipe out. Weight distribution is handled with the right stick, and the right amount of lean can mean the difference between an immaculately drifted corner or a perfectly placed jump, and eating dirt. Controlling your speed is crucial, because you want to grab enough air to clear the big jumps, but not too much for the little jumps. Spend too much time in the air on little jumps and your competition will bunnyhop right past you. Take a turn too fast, or at the wrong angle – always, always make sure your front wheel is in the direction you want to go before taking a jump or starting to accelerate – and you’ll slam, ragdoll style, into a barrier.

This is just the basic stuff, by the way. Once you start turning off the assists and have to figure out how to shift gears properly, how to use a scrub to take a jump, and how to actually race without the game’s finger on the scale, things get wild. You get used to it – I eventually started placing well, though I often used the game’s rewind function, which functions the same way it does in a Forza title, to do it – but even when you realize what you have to do, it’s not easy. Regardless, it’s nice that the game lets you play however you want to, and there’s a lot of depth here if you feel like mining it. 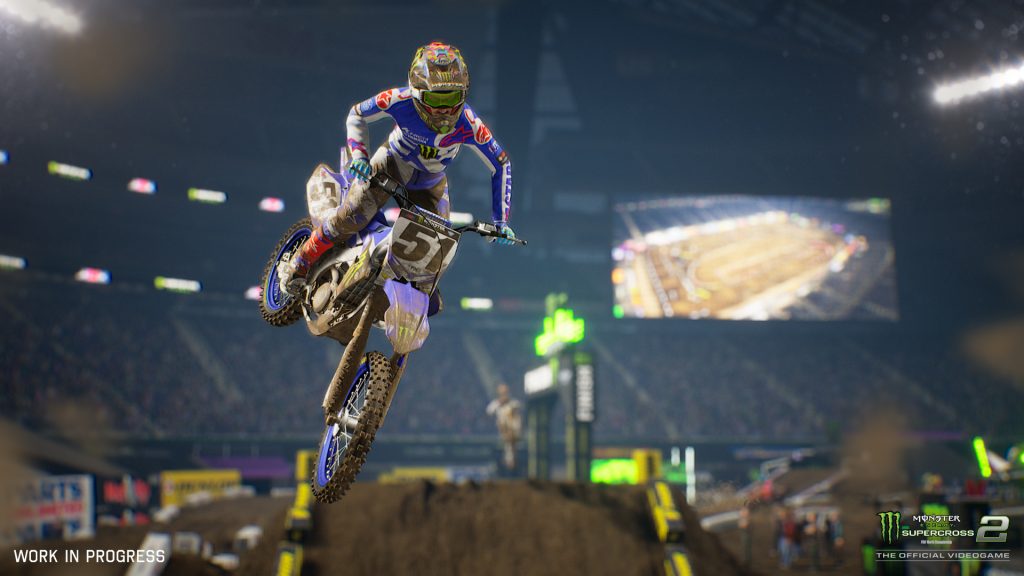 "he tracks you’ll race on are well-rendered; clumps of dirt fly into the camera, and barriers react in realistic ways when you hit them."

The tracks you’ll race on are well-rendered; clumps of dirt fly into the camera, and barriers react in realistic ways when you hit them. I can’t speak to how true the tracks are to their real-life counterparts – I’ve never watched Supercross – but the way they are set up makes me believe that Milestone has succeeded. They feel good to race on and flow naturally. There’s also some commentary at the beginning and end of races, but it’s incredibly generic stuff and you can skip it without missing much of anything. This minor niggle aside, the races are easily the best part of the game and it’s easy to see where Milestone’s focus was.

The same can’t be said for the rest of the game’s production values or customization of created riders. The models look odd and dated, and there’s not much here to fiddle with if you decide to create a character – 12 faces to choose from, and some colors (hair, eyes, etc) to change. You can grab hats and sunglasses to customize your character, but they’re very, very expensive (thousands of in-game credits) and are so hilariously oversized that they look like they’d be better suited to a clown costume.

The modes are equally barebones. Many of them are racing game staples: time trials, single events, and championships and you can customize a good deal of how they work. Wanna go through qualifiers for races? Go ahead. Want to just skip to the main event? Knock yourself out. There’s also a career mode for your created riders. It offers you some interesting options – you can train to better your rider, do promotions to make money or raise your fame, complete challenges, etc – and advance through more lucrative sponsorship deals if you do well enough, but aside from a few more cutscenes and the odd training or challenge, it’s just another way to get you into the next race. 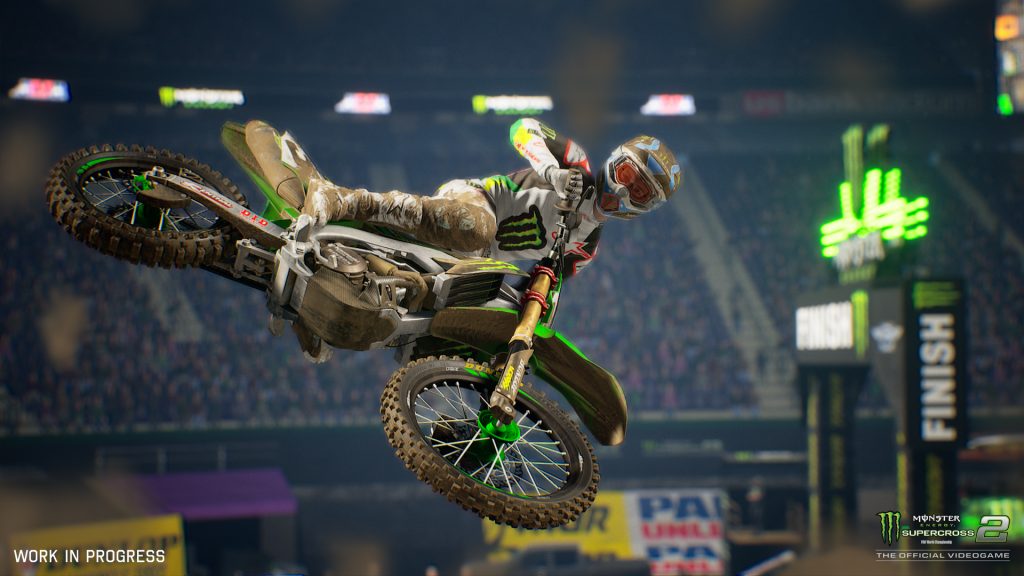 "How much you enjoy Supercross 2 will largely depend on how much you enjoy either the races themselves or playing with the track creator. The compound is nice, but it’s about the only time the game deviates from its core gameplay loop. There just isn’t a lot of variety here."

Between races, you can hang out in the compound, a kind of free play area with jumps and turns you can use to practice. There’s also a track editor with a ton of options and strong tutorial that will walk you through how to use them, and the obligatory online modes which include custom lobbies and quick matches. But beyond that, the game doesn’t offer much to do; how much you enjoy it will largely depend on how much you enjoy either the races themselves or playing with the track creator. The compound is nice, but it’s about the only time the game deviates from its core gameplay loop. There just isn’t a lot of variety here.

And then there are the bugs: riders not loading in at the starting line pre-race, certain colors not displaying properly, stuff like that. Once, after giving me credits for accomplishing a sponsor objective, the game refused to stop playing the “credits are being deposited into your account” sound, which got so grating that I ended up having to restart the game.

It’s easy to see the appeal of Monster Energy Supercross 2. The game recreates the sport admirably, and there’s enough depth to the gameplay to satisfy even the more hardcore fans. Those who love the sport, and want to experience it as intensely as possible from the comfort of their couch, will find a lot to like here. But the presentation problems, bugs, and lack of gameplay variety do drag down the experience for someone who might be looking for a more casual experience. In many ways, it’s like a rider with one really great skill. That skill – the gameplay – is really cool, and it’s fun to watch them pull it off. But even the best tricks get old after a while. How much you love what Milestone has accomplished here will depend on how much you love Supercross 2’s gameplay, and how little you mind its lack of variety and inconsistencies. Like I said, it’s a good trick; let’s hope next time Milestone is ready to show us a few more.

Excellent gameplay with lots of depth. A lot of well-realized tracks. Multiple modes to play through. Good tutorials. Lots of gameplay assists to help newbies. The track editor is great.

Production values are inconsistent, especially with characters and cosmetics. Not a lot of variety in terms of modes. Career mode is barebones. Generic commentary. The odd bug.

Final Verdict:
FAIR
Monster Energy Supercross 2 recreates the spot admirably and has enough depth to the gameplay to satisfy even the more hardcore fans, but it's held back by bugs, inconsistent production values, and barebones modes that lack variety.
A copy of this game was provided by Developer/Publisher/Distributor/PR Agency for review purposes. Click here to know more about our Reviews Policy.