An exciting time on a bike.

There are two kinds of racing game fans in this world. The first is always down for an evening of Mario Kart with family, and isn’t taking things too seriously, but can hop online for some good old fashioned competition. And then there’s the kind of racing game fan who can dive into the gritty details of a customized ride for hours, tuning it to perfection before taking her out for a short spin and decided that some more tweaks are needed.

Monster Energy Motorcross then, isn’t quite sure where it wants to fall into that spectrum. If the name itself didn’t quite give it away, this is a game where you can enjoy some good old fashioned Supercross bike racing from the drivers seat, and hopes to cater to the people who were looking for both a hardcore simulation title and those who just wanted something akin to Excitebike. Unfortunately it’s just kind of middling in that respect.

Forget any tutorials or even a brief view of the controls, you’re going to be thrown right into a race from the start of the game, and tossed from the nest to intuit all of the little things that make the game what it is to play, with the aid of a screen cluttering control window as your only guide. There’s actually a general dearth of modes, which is rather disappointing in general. The game could have really used a free race mode where the player can harmlessly practice and gain mastery over the controls, which is generally rewarded. 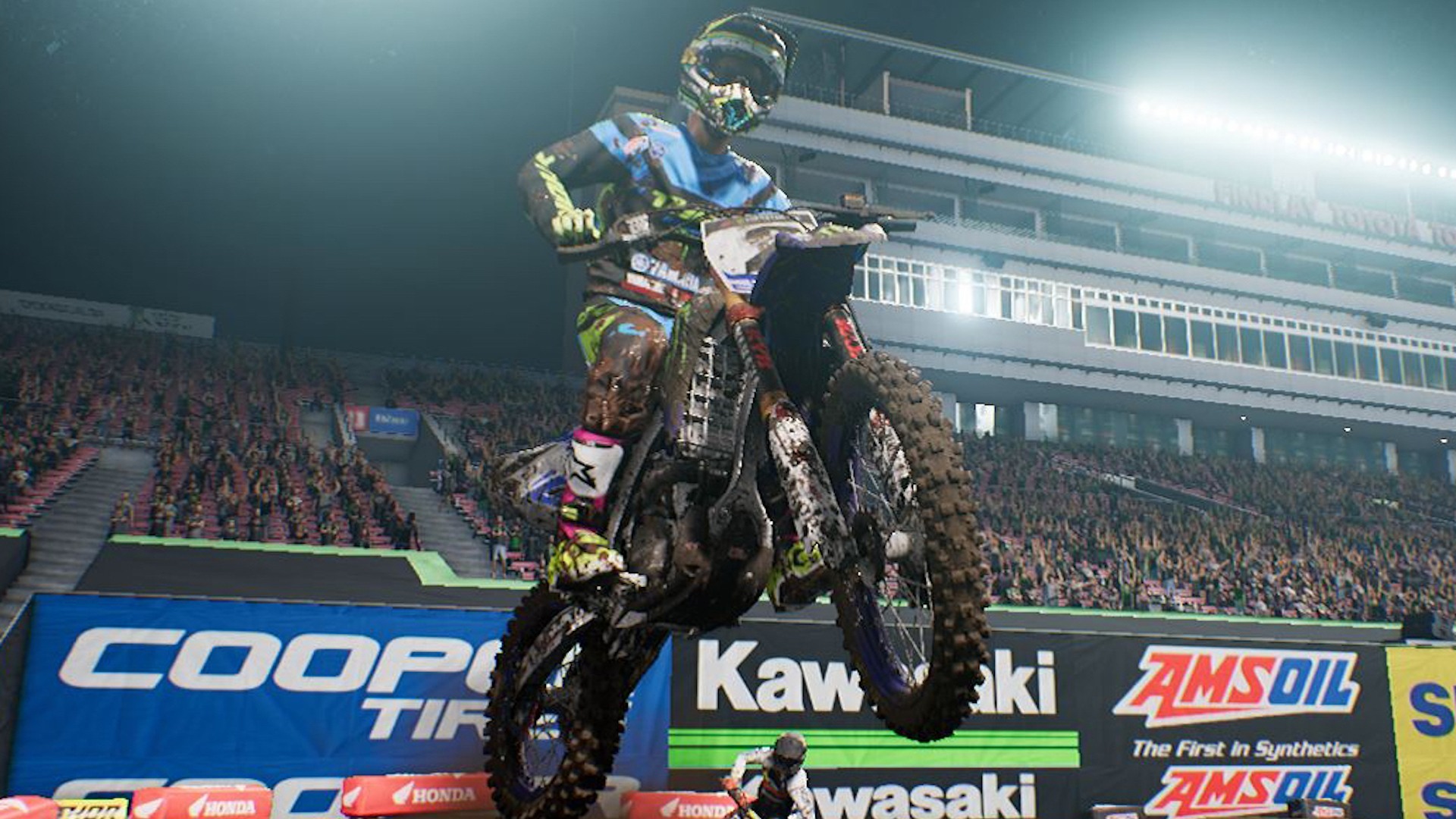 "Managing each and every turn, where your racer’s weight is, which wheel is braking and using your clutch, while making sure you’re nailing each jump and landing just right turns Monster Energy Supercross into a far more engaging game."

Whether you decided to throw yourself against the wall in Career, Championship, Single Event or Time Trials, you can make changes through a rather unintuitive menu system that define your difficulty through different options. At default, elements like assisted breaking, physics, transmission are all turned on, designed to bring the game more in line with an arcade experience. The problem with that is that it only goes so far in, as even on the lowest difficulty the racers can be super punishing. Just a bit of lean in the wrong direction and your racer can careen off the track, for example. Luckily the game includes an optional rewind function, similar to the Forza series, which can allow the player willing to use it to take as many shots at the turn as they need, meaning that while it doesn’t quite dumb down to arcade levels, anyone with the persistence can win a race.

Now, turning off all the assists can be an experience in and of itself, and it’s clear that it’s how the developers intended for you to play. Managing each and every turn, where your racer’s weight is, which wheel is braking and using your clutch, while making sure you’re nailing each jump and landing just right turns Monster Energy Supercross into a far more engaging game. The game even employs a rather unique method of encouraging players to take off the training wheels, essentially providing a multiplier to experience and money for every option you tweak to be harder, up to earning 400% of your bonuses. This allows each player to tailor what little there is to be just to their liking, without really feeling like they’re forced to deal with something they don’t find fun. If you want that sim experience, but still need the occasional rewind, then go crazy. 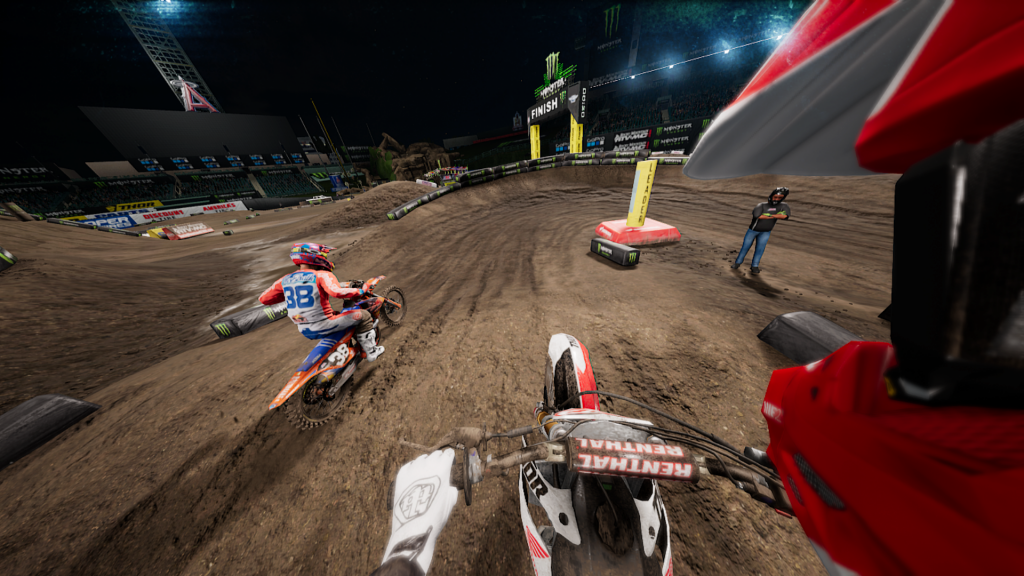 "Though the tracks won’t be visually very diverse, they become generally more intricate as a career mode goes on, and do a good job of keeping the player’s skills growing."

Now regardless of settings, once you’re in a race the experience is pretty similar regardless of mode. Success is determined by  your ability to work with the jumps and turns given to you and making sure you don’t muck it up and wipe out. While I had the very occasional physics snafu, like riding another racer for about 3 seconds in a way that would have easily snapped an actual neck, and a rather amusing ragdoll simulation when I clipped a barrier at a strange angle and went flying, much of the time the game behaved itself as expected. Which is to say, unremarkable, but just fine. My bike largely did what I expected it to do, and when it didn’t I could say it felt like I was at fault, which is exactly what you could hope for from a racing game.

Unlike another simulation racer, such as NASCAR Heat 2, Monster Energy Supercross has the benefit of a variety of tracks and different bikes to keep players interested. Though the tracks won’t be visually very diverse, they become generally more intricate as a career mode goes on, and do a good job of keeping the player’s skills growing. Another one of those options that players can tweak is whether they want to do a truly realistic circuit of qualifying races before the main event, or just play the highlights, which is another way the game brings customization to the forefront and allows the player control over their experience, which I have to laud. 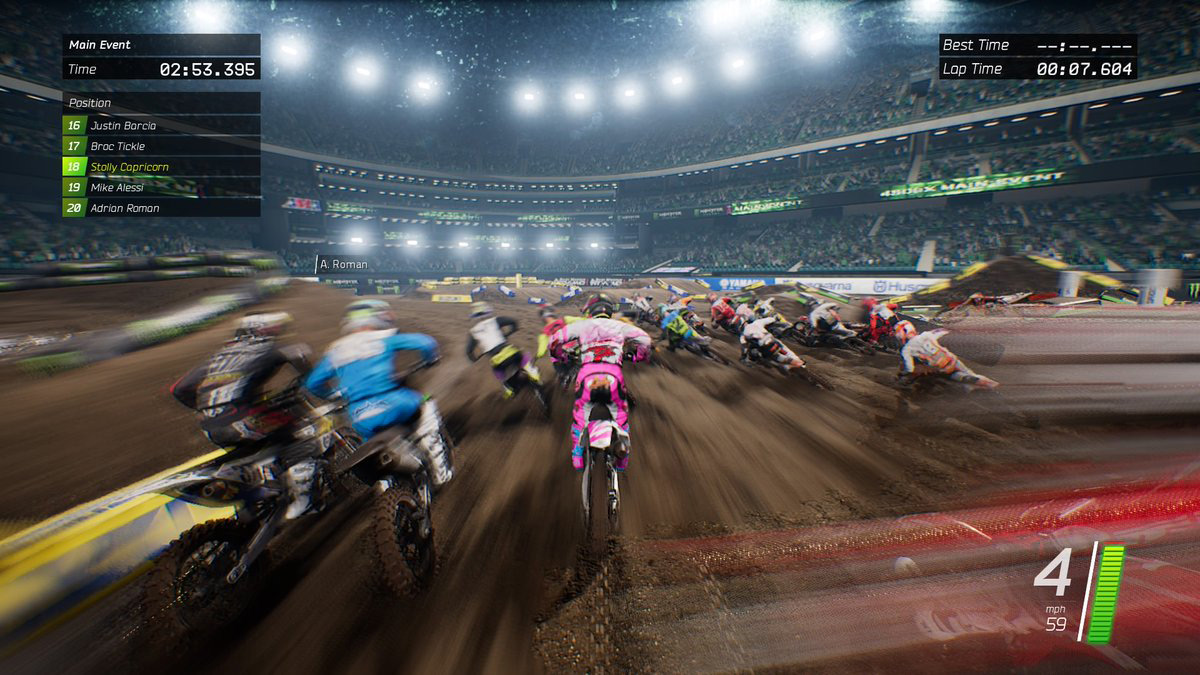 The game does include online options, which are unfortunately as undercooked as the offline modes. There is no matchmaking taking place, instead just randomly bundling players of all skill levels into a room for a free for all. Trying to select a lobby by hand is an exercise in frustration which just usually means you aren’t finding a game.

Visually, the game doesn’t really look too spectacular, even on the PS4 Pro. Models and tracks mostly looked “good enough.” Music was the usual kind of generic rock and metal that so many low budget racing titles use, and the sound effects were serviceable at best. It’s the curse that so many of these niche sim games unfortunately have to live with, but at least I can say with confidence that I don’t feel like it ruins the game.

Your mileage with Monster Energy Supercross – The Official Videogame may vary. Those who wanted an arcade racer will find that the options the game gives only go so far towards that experience, and the game is really going to shine, and is designed for that kind of enthusiast that will put in the time to develop the racing chops and craft the bike to take them to the top. The lack of modes and middling visuals won’t bother these people quite so much, and the small bits of jank won’t even register most of the time. It’s a fine effort, but hardly for everybody.

The game makes admirable attempts to allow some pretty deep difficulty customization, allowing players to choose their own experience from (almost) pure arcade to straight simulation. Given the obvious budget constraints, an admirable level of polish shows.

The lack of tutorials and modes doesn’t really wash with the more casual player who will likely drop the game long before the truly rewarding play is learned. Presentation is held back by what I can only assume were budget restraints.

Monster Energy Supercross - The Official Videogame is actually a surprisingly competent for what it sets out to do, and fairly accommodating next to something like NASCAR Heat 2, which generally just didn’t care if you were hoping to get into the genre.

A copy of this game was provided by developer/publisher for review purposes. Click here to know more about our Reviews Policy.
Tagged With: Milestone S.r.l., Monster Energy Supercross - The Official Videogame, pc, ps4, Xbox One