It was around this time last year when I reviewed MotoGP14, and standing by every word I had written I wasn’t at all impressed. Where I had no gripes with its actual gameplay, the frustration I experienced in terms of installation, loading times, and graphical quality that the game had to offer didn’t sit quite well with me. Not too long after, Milestone S.r.l released RIDE. Offering a more casual and laid-back experienced to the latter, all be it the monstrous loading times, RIDE was a game I could clearly get on board with.

MotoGP15 is a similar case on both accounts. Taking notes from its predecessor while delivering a more authentic and solid experience that the series excels upon and does so well with, MotoGP 15 didn’t have to do much to impress me, it just had to fix what was wrong. Being the only studio that actually puts out games of this genre, Milestone S.r.l. doesn’t have any competition to be wary off. And while this may seem like a positive aspect for the studio, it also presents many challenges for them. Competition drives innovation, and innovation leads to new experiences. 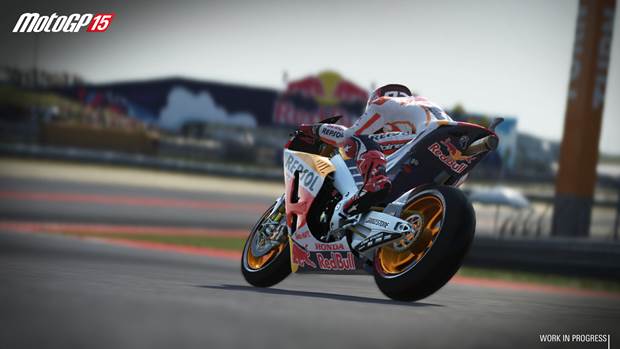 But if there’s no competition, slacking becomes prominent. Milestone S.r.l. is in competition with themselves. Which means I expect consistency while being delivered a new experience given their expertise in this area. MotoGP15 does attempt to achieve this and while it succeeds in certain aspects, primarily in the form of new game modes, it doesn’t provide a valid reason for those who have never been interested in the series to do so now.

MotoGP 15 has its audience but there’s nothing new that the game provides that will attract outsiders. The game brings back past game modes and those most common to racing games such as Championship, Grand Prix, Career, and Time Attack. All of which can be raced upon from a selection of over 20 bike models across 3 different classes, including those from all previous games in the series.

And while some of these traditional modes have undergone slight iterations with various online integration, the new additions come in the form of Real Events mode and Beat the Time. Real Events allows the player to relive past races from actual riders, while completing objectives and taking on challenges as they where actually performed by the appropriate rider. This is great news for hardcore fans of the game as well as motorcycle enthusiasts. 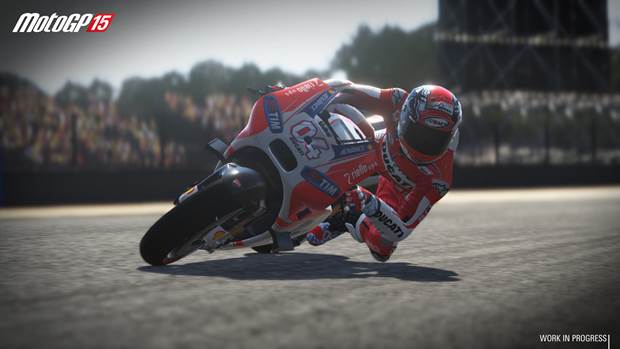 "Which means I expect consistency while being delivered a new experience given their expertise in this area."

While I didn’t fair so well taking on the challenges myself, the fact that it’s challenging encourages the player to continue and become better at the overall game. Beat the Time expands on this aspect of challenge as it requires the player to beat a specific time on a specific track with a specific bike.

While this somewhat diverts the players focus when aiming to master a specific bike in other game modes, it is enjoyable and it provides something else for the player to take part in. Where the soul of the game resides is within its Career mode. Creating a custom character consisting of gear, racing style, name, nationality, and gender, allows the player to have presence within the game and participate as a professional rider.

As the player works their way up by completing races, signing with teams, and participating in sponsor based contracts, they’ll earn reputation points in the form of money and fans. Rather than implementing a complicated menu system coupled by tabs and tables, the game seeks to immerse the player directly in to the game through the use of the riders cabin. Within this space the player can check their calendar for upcoming races, enter their bedroom to change their riders gear, and check their PC for emails from teams and contracts. 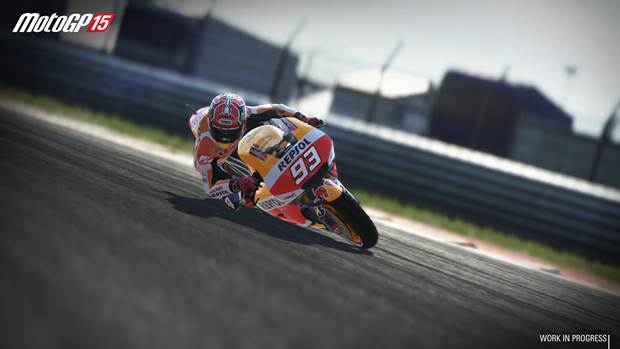 "Where the soul of the game resides is within its Career mode."

This is a unique touch and it goes a long a way in making the player feel immersed within the game’s world. While the additional game modes are great to see and is clearly something that enthusiasts will certainly be excited for, controls and gameplay mechanics is most likely where this specific audience is hoping to see changes and improvements.

MotoGP 15 is all about authenticity and realistic handling, and while this is tailorable for a more casual experience, the game encourages the player to progress with their skills so that they’re able to race on the top-end on the scale. Since the experience is configurable, players are given many choices in terms of racing aids, level of A.I., racing lines, brake assistance, vehicle damage, and physics simulation.

Although this works well in practice it can cause some issues when the player chooses to take part in a race which requires a different class of vehicle, or should they choose to customize or upgrade their custom bike. But this is all down to the learning aspects of the game as it means you’re required to adopt to new situations, something which will become very apparent with the games various weather conditions, when fitting incorrect tire types.

As mentioned previously, the A.I. of the competition varies depending on the player’s choosing of set difficulty, and while the it seems to fair well during the default difficulty setting, how it fares on easier and harder levels is where things can feel a tad bit random. Adjusting the game for an easier ride can cause the game’s A.I. to not pay attention in the existence of other racers on the track. 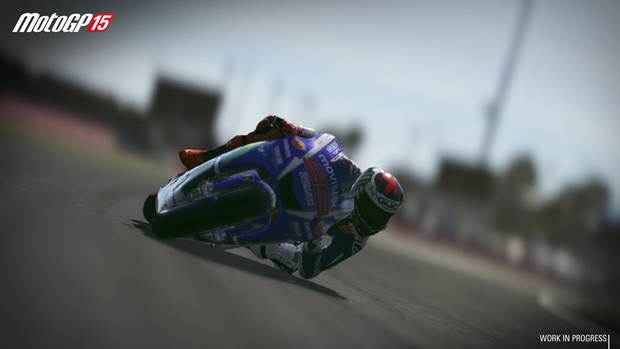 "This is a unique touch and it goes a long a way in making the player feel immersed within the game's world."

This is common to a fair number of racing games and it results in a simple manner of trying to finish the race as opposed to riding professionally. The lack of awareness is begging for a pun here, but I’ll willing to leave things be. Harder difficulties can result in a more challenging and enjoyable experience for those familiar with the series as well as those who are willing to put in the work and raise their skill level. This is where player A.I. becomes a bit more interesting as it deliver on the intended experience that the game wishes to deliver.

Something which becomes very obvious from the start of the game is the emphasis on motorcycling history. Throughout the games many loading screens and introductory videos, MotoGP 15 prides itself on presenting information on historical events, tips on racing with specific vehicles, and how to make the most of tuning your bike before heading out on to the track.

All of which proves to be helpful and aims to make the player a better rider. Graphical quality is where the game falls short, sadly. While it’s a step-up from its predecessor, it isn’t without its faults. Vehicle and character models are superb, there’s no doubt about it. Combined with cinematic camera angles and depth-of-field to top it off, the entrance to every race can be truly immersive.

Where this all seems to fall apart however, resides in the presentation of the race overall. Stadiums and tracks are appealing at first but it’s doesn’t take too long before you realize just how bland and lifeless these locations actually are. Ever since the release of Codemasters’ GRID 2 back in 2013, I’ve held it as the visual standard for every racing game that has come and gone since. 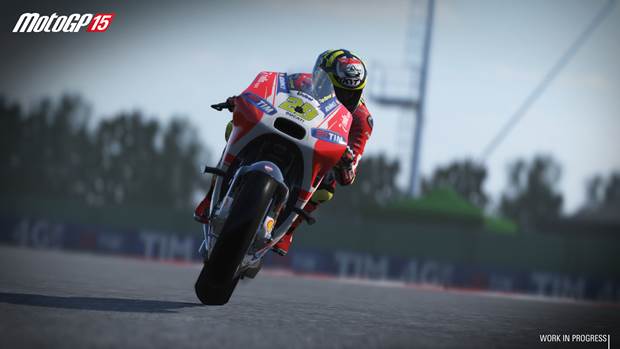 "This isn't done as a measurement of gameplay, authenticity, or graphical quality, but in terms of its visual presentation and the factor of immersion. "

This isn’t done as a measurement of gameplay, authenticity, or graphical quality, but in terms of its visual presentation and the factor of immersion. It has unique wow factor that a great number of racers seem to lack and it’s something that I wish more games would take note from.

MotoGP 15 is without a doubt a solid racer, unfortunately, it’s gasping for life. Cheering crowds, balloons in the air, helicopters flying above the stadium, smoke and particle effects. I could easily go on but it’s these small details specifically that made GRID 2 so appealing and so distinct from it’s competitors.

It had life, it thrived on immersion, and it breathed excitement. MotoGP 15 is bland. There’s no sense whatsoever that any of the environments the game presents to the player could be actual real-world locations. Almost everything within its environments resemble a movie prop. It’s quite painful to say this too, since the gameplay itself is truly amazing. Other aspects in the games visual department also fall short, primarily within its textures. 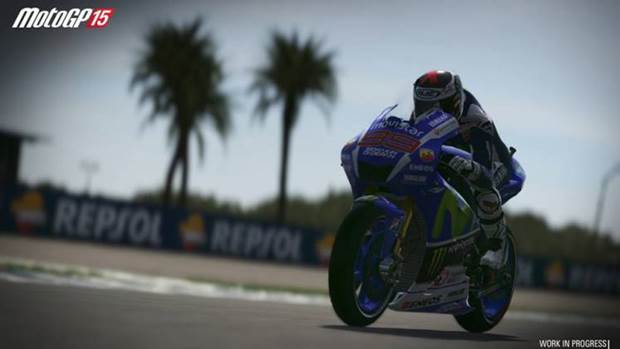 "Other aspects in the games visual department also fall short, primarily within its textures. "

As far as I can tell, anisotropic filtering looks to be rated at around 4X, it could be slightly higher but it’s not pleasing regardless. To put this in layman’s terms, everything outside the immediate vicinity of the rider isn’t too attractive to look at. Performance on the other hand seems to be fairly stable, something of which is much more important to the overall experience of the game.

Milestone S.r.l. has created a superb game, there’s plenty to do and there’s a reason to progress within all of its many game modes. While I’m pleased to see how much it’s improved from its predecessor, what I would like to see going forward with the series is a rise in visual quality. Authentic experiences are key to games of this nature but if they can only do this in the way of gameplay mechanics, they would’ve been better off by applying an update to the game that came before.

Superb gameplay, tons of gameplay modes that never get bland.

Graphics fail in comparison to the quality of gameplay.

Final Verdict:
EDITOR’S CHOICE
While it's not visually amazing, Motogp 15 delivers a spectacular racing experience thanks to solid gameplay and a great scale of challenge.
A copy of this game was provided by Developer/Publisher/Distributor/PR Agency for review purposes. Click here to know more about our Reviews Policy.