If you aren’t familiar with the basic mechanics of Mount and Blade, read the review of the original game here. However, if you own or have played the original, the gameplay stays much the same. Combat is a simple to use, hard to master affair, with one button for attack and another for block or parry. However, this review is going to look at the new content. 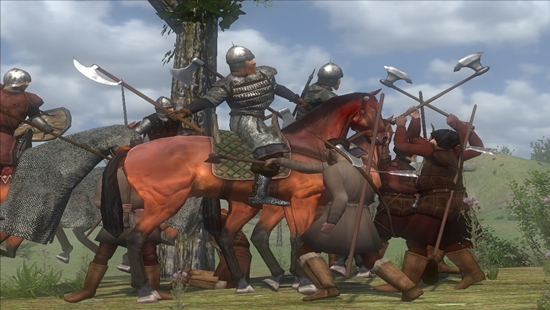 Multiplayer is what it’s all about.

The new campaign works similarly to the original, with you taking control of one man (or woman) who you lead to victory, acquiring new followers, more money, better weapons and more. This time however, you can become king, appoint lords and dish out rewards for your men. This adds a cool tactical edge to the game, but it has been done before by several mods. This isn’t necessarily a bad thing, as Warband is naturally more polished, but it would have been nice to see something truly original added to the mix.

What everyone wants to know about though, is the multiplayer. Servers can support up to 64 players in free for alls, battles and capture the flag. The combat remains the same here, but with human opponents you have to be much more on the ball. Now that there is a button that allows you to kick your opponent and stumble them, getting too close can spell disaster. Human enemies tend to do all kinds of other devilishly evil things such as hunting you with crossbows from afar, or jumping to your rear to stab you in an all-too-horribly-exposed back.

While there is little in the way of continuity between matches, each time you kill someone you earn money. This can then be spent on better armour or weapons (veterans of Counter Strike will feel right at home). Unfortunately, this normally means that players that have been grinding on the same server for a long time can have an advantage over new joiners. Nevertheless, with a bit of luck, you will soon be making your own money and be tooled to the teeth.

In classic multiplayer style, there three troop types. Each one is heavily modifiable, but the basics are Infantry, who are best armed with a sword and shield, Marksmen, who should try and stay away from melee combat and try to attack from cover, and Cavalry, who are mounted and are best used with a large spear or two-handed axe. Each class is fairly well balanced, and although Cavalry might seem like the superior option, many players quickly realise that most Infantry are adept at neatly sidestepping a charge while thrusting a spear into your torso.

Griefers will always be found, in every game, but oddly many players seem to actually be able to co-ordinate some tactics. In one server, my team actually banded together all the spearmen into a spear wall, with archers behind them, creating a deadly blockade for horsemen. Unfortunately, most of the maps are balanced horribly. Particularly on CTF modes, it can be possible for one team to simply hole up in a fort and rain death on their opponents spawns, but we’re hoping this will get patched. 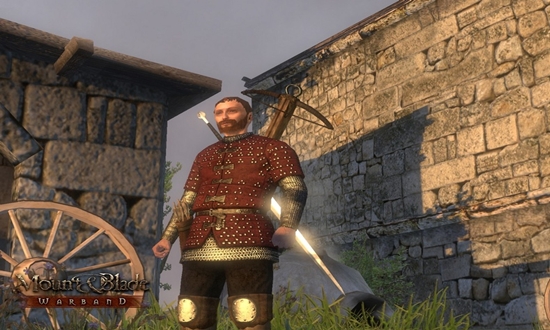 The HDR is a nice effect, but the overall look remains ugly.

The graphics, while greatly improved, are still nothing to look at. While HDR significantly boosts the appearance of battle maps, close up textures still look muddy and facial expressions are downright awful. Luckily, the gameplay is just so darn fun that hopefully you will be too busy lopping off someones head to notice. The same goes for the lacklustre music score, which has simply been pasted from the previous game.

Overall though, Mount and Blade: Warband is a game you should definitely pick up, if for nothing else than the fact that there are no other games like it. The multiplayer is addictive, gory and rewarding, although balancing issues can make it more of a frustration than it needs to be. The solid engine also means it is one of the most moddable games on the market, potentially giving unlimited amounts of new content. This is one to buy.

Much of the new campaign was modded into the original game, new visuals aren't all they're cracked up to be, many maps have balancing issues

Final Verdict:
SUPERB
If you played the original Mount and Blade, Warband adds just about enough new content to make it a worthy purchase. If you didn't play the first game, you owe it to yourself to play this game.
A copy of this game was provided by Developer/Publisher/Distributor/PR Agency for review purposes. Click here to know more about our Reviews Policy.