Mount and Blade: With Fire and Sword Review

Yet another PC action RPG based on an obscure Polish novel I’d never encountered didn’t exactly seem like my idea of a fun day at the office but, my cynical pre-conceptions were ill called for as, With Fire and Sword surprised me with its unique setting and intriguing combat. Every silver lining has a cloud though it seems as, despite the game’s fantastic amount of content and impressively non-linear gameplay, it looks god awful and has some rather embarrassing dialogue.

The game begins as all good open-world RPGs should, dumping you in the middle of nowhere with very little direction. You join in on a fight with ruffians that makes up a vague tutorial, get some directions to the nearest town and then go on your merry way. What you do after that is up to you, and that is where With Fire and Sword really shines. Do you join the Polish or Crimean army? Pillage the local towns as a rough and ready bandit? Do you just want to meekly trade your goods till you can afford that really fast horse? The choice is up to you, and this is furthered by the game’s massive world and vast quantity of different mounts, weapon types and trade items. 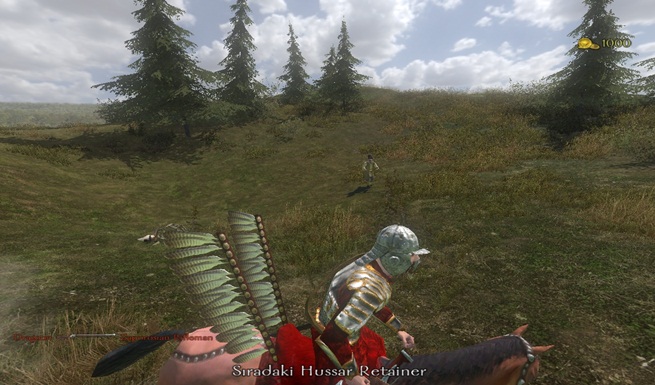 I rode through the plains on a horse with no name

All these choices wouldn’t make a difference if you didn’t care at all about the game world, but With Fire and Sword’s intriguing setting helps prevent this from being the case. Set in a war torn 17th century Eastern Europe, With Fire and Sword chronicles the five nations that battle for supremacy. Though only three of the nations have proper story lines as such, you’re free to join, oppose or aid any of the lands as you see fit. You can also become a brigand and pillage the towns, if that’s how you like to roll. What helps WFAS feel alive is the way events occur within the game in real time. While you travel around the world looking for a new quest to fulfil, those cheeky Cossacks have taken another Polish fort within your vicinity. Whether you stroll by or get involved is up to you, but the event will start and finish without your input.

Should you decide to get involved in any conflicts that occur along your merry way, you’ll be greeted with some deep and satisfying combat mechanics. It initially feels sparse, with big maps that are only populated initially by yourself and a band of ruffians. Once you recruit some allies and take on larger groups though, the real tactics start to kick off. As you may have guessed from the game’s title, you do a lot of fighting on horse back. Thankfully, the horses are controlled in a fairly easy and arcade-like manner with WASD. This leaves you free to run around the battlefield like a maniac with sword in hand. Melee combat is satisfying with some appropriately sharp sound effects and a decent variety of different cutting implements. Strikes are made by clicking the mouse and pulling it in the direction you want to strike. Fans of click ’em up games will find this method clunky to begin with, but it does leave you room to experiment with how different strikes control the areas around your horse. There are also a multitude of ranged weapons available, from guns and rifles, to bows of the long and short variety. Ranged combat is a simple matter of point and shoot, but is balanced well by its general inaccuracy in comparison to close range combat. You are on horseback after all. 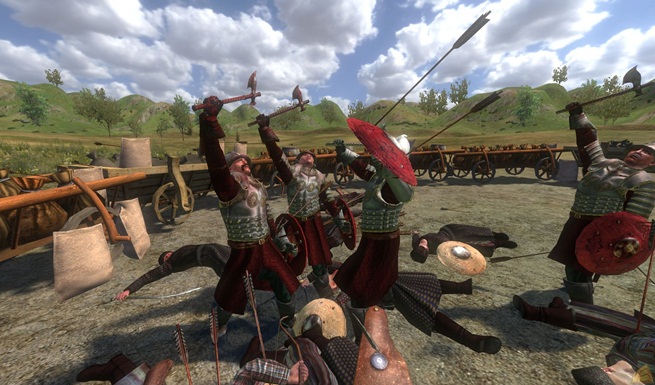 Deep, satisfying and brutal; the way all combat should be

The satisfaction of combat is supported by a simple, but enjoyable, levelling system. You gain experience points for quests and combat achievements, and level ups provide you with a multitude of points to invest in basic attributes, combat skills and other miscellaneous feats. The rest of the game sees you roaming the land in search of quests, loot or other virtual pleasures. The world map itself is a simple click and go to affair, but the towns and fortresses are navigated by menus. You can choose to explore them on foot if you wish, but it is a rather bleak and unpopulated setting you are presented with. Some may feel disappointed by the lack of creativity in a menu based exploration system, but it is certainly very practical.

Though the core gameplay of WFAS is impressive, it is wrapped in a rather unassuming layer of drivel. The soundtrack is the least offensive element compromising of some pleasant, though highly derivative melodies. The dialogue too is very hammy and amateurish, featuring such classic lines as “it’s so nice to make friends among this chaos, would you like to join me for some supper?” In a way though, this is endearing enough if you can just take it jovially and ignore it in favour of how the game plays. What you can’t quite get away from however is the game’s visuals. They really are reminiscent of the N64 days, with bland textures and blocky character models dogging your every action. I’m normally not one to call out sloppy graphics in an otherwise engaging title, but WFAS has such poor visuals that I need to make an exception to my normal rule. 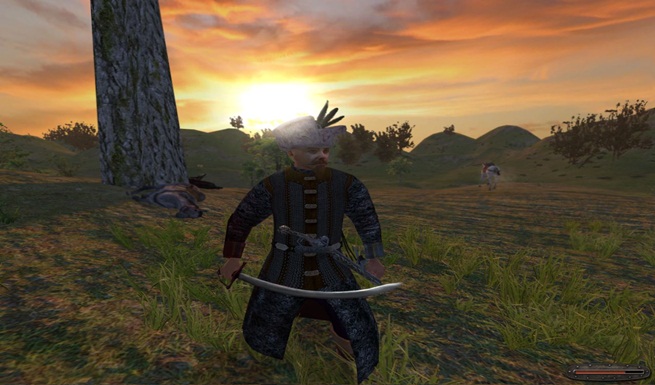 The less said about the visuals the better

There are definitely rocky paths on the winding road of Mount and Blade: With Fire and Sword, but it is a title that deserves better than to be scorned for its minor blunders. It may have benefited from higher production values but, at the very moderate price it is retailing for, what more do you expect. WFAS offers a fantastically open and deep adventure for a low price. If you like your open world games or RPGs, ignore the crappy graphics and dialogue and give WFAS a go.

Final Verdict:
SUPERB
A stand-alone expansion pack to Action RPG Mount and Blade, With Fire and Sword offers an open-ended adventure in a unique game world. Though the game's mechanics are top notch and inspiring, poor production values offset the package somewhat
A copy of this game was provided by Developer/Publisher/Distributor/PR Agency for review purposes. Click here to know more about our Reviews Policy.