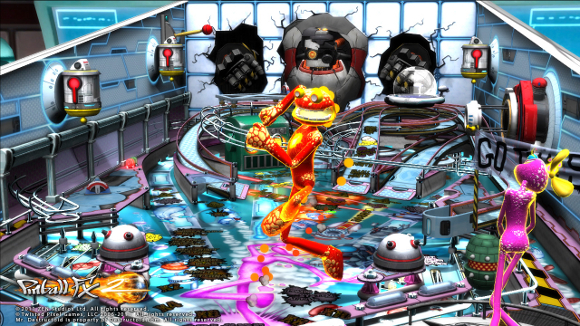 Pinball FX 2 seems to just keep pumping out more and more pinball tables adding Achievements/Trophies, that I really don’t see any end to this.  Of course this is great news for people who love to play pinball, or at least an arcade pinball game.  All the tables that are released for the game are priced at a low price, unless you are purchasing a package of tables.  For example they have a whole bunch of different Marvel themed tables, like Wolverine and the Fantastic Four.  Even Captain America which we have reviewed right here on the site.  With the latest tables that have been released I would say that they definitely keep it interesting, but the newest table release which is the Ms. Splosion Man table, I would they are starting to keep things up to date now as well.

The first title in the franchise was Splosion Man, which was a super hit on the Xbox Live Arcade Marketplace.  What do you do when Splosion Man is in trouble, you call upon Ms. Splosion the second title in the franchise.  The game was the same price and played the same way making a good game, but lacked new features that either make sequels great or horrible.  Regardless this is a review for the Ms. Splosion Man pinball table and not the game, which is one great table.  With all the other tables you used seeing the faces, themes and abilities of some of the characters the previous tables have.  With the Ms. Splosion Man table, it is new, fresh and unique to any other table you can get.  Of course anyone used to the Splosion Man games will be used to explosions and there a lot of them that occur on the table.  Some triggered and sometimes pretty much a pretty much random Splode will occur from the Ms Splosion in the back right corner near you to elsewhere on the table.

The new table is actually a lot of fun and nice change of pace from the other tables.  This one seems faster for some reason, as if there is more going on as Ms. Splosion makes random comments that range from being slightly funny to not making any sense at all.  Ms. Splosion Man developers Twisted Pixel worked along side Zen Studios to really bring the table to life and bring elements from the game to the table to make it one of the best yet.  You will see characters that appear in the arcade game like Scientists and Rollerbots, all while Ms. Splosion stands in her corner occasionally doing a dance or saying classic remark.

Eventually after being able to smash this little head on the table, Might Eternal emerges who is also in the arcade game.  There are so many exploding triggers and there are even traps.  You can even have three pinballs on the table at once.  After Might Eternal emerges, you must overcome many unique challenges, I have never seen in a pinball game before.  If you can manage to master the table, you can free Splosion Man away from the Might Eternal boss, but it is not easy, unless you are a pinball king I suppose.  Well who am I kidding if you are a fan the Pinball FX 2 and play the tables a lot, it really shouldn’t be all that hard.  All in all though it plays out like a mini arcade game within a pinball table, which is why this one is so great.  The other table have their strong points, but this one is unique to them all and any fan of Pinball FX 2 should most definitely get this table.  It will run you 240 Microsoft Points and if you had to choose a table to get, this one could very well be the most satisfying.

Great new change of pace to the Pinball FX 2 series as well as being a modern table.

For players that are not pinball pros, it can be VERY difficult to complete all the tasks that the table has to offer.

Final Verdict:
SUPERB
Both Twisted Pixel and Zen Studios worked together to make this table just as fun, quirky and unique as the arcade game with explosions everywhere. The table is almost it own game in itself, with a boss battle, challenges and more.
A copy of this game was provided by Developer/Publisher/Distributor/PR Agency for review purposes. Click here to know more about our Reviews Policy.