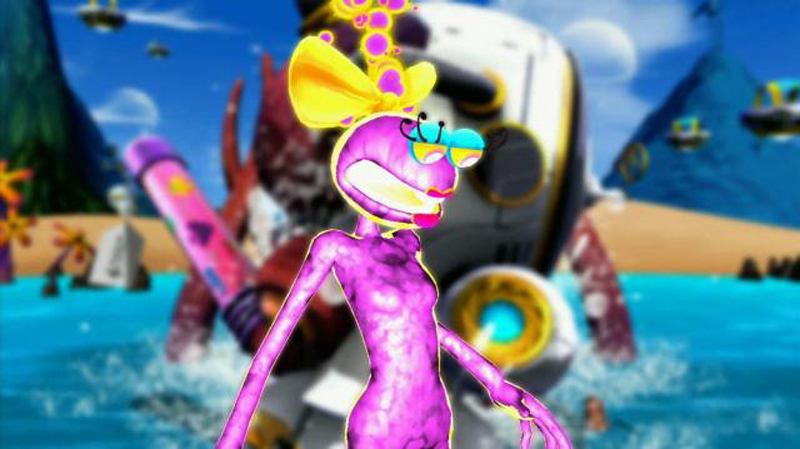 Do not let this exploding lady fool you, if you were a fan of the original Splosion Man, you will love Ms. Splosion Man.  The game has taken everything Splosion Man has done and taken it to the next level.  The game is funnier, harder and probably the most creative platformer I have ever played.  There are more modes in the game and a whole new interface that makes the game better than the original one.  At first, I did not want to play what came across as a girl version of Splosion Man, but folks it is far from that, I can assure your.

As Ms. Splosion Man progresses through the many levels made by the developers, you can see the similarities to Splosion Man in the subtleties as she will mumble randomly, sing, and quote things as she scrolls across the level, but sometimes you will hear her humming along as she skates or skips along the way.  You might also catch her singing a No Doubt song (Gwen Stefani), spouting out a movie quote or just saying random humorous things.  The feature for cheating and skipping a level that is giving you a hard time has returned, but like the first game, it does not go without consequences (the first game made you wear a ballerina outfit).  If you choose the skip a level in Ms. Splosion Man, you will be forced to play the entire next level with an enormously large ass, but hey it’s not that bad.  Then again, you will have to hear a very well constructed song about your fat along with the level. 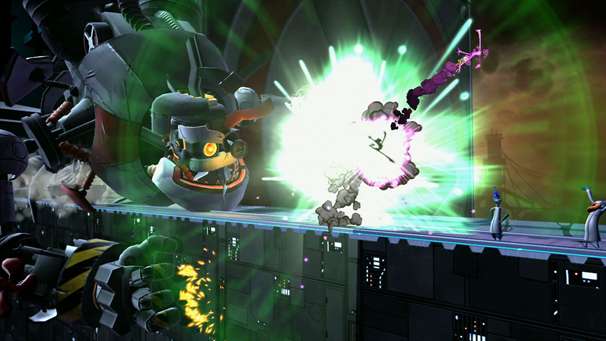 The Scientists that regret creating you are back, and you can explode them once again turning them into t-bone steaks among other things, which of course lets you destroy everything in your path too.  Ms. Splosion Man is actually much harder than the the first game, and I did not think that was even possible, but yet it is.  It is still extremely fun and very addicting as well as rewarding once you complete that level you had been hard at work on for hours.  It is not just the interface that is new, but they have new challenges added, where for instance, the current one will time the top three players in a challenge where they will each win Ms. Splosion Man packages generously being provided by D-toid.  Oh, and don’t worry about the pesky collectables.  Now you have to find shiny, pink high heel shoes… all 47 in single player as well as all 50 in multiplayer.

Speaking of multiplayer, it has returned in Ms. Splosion Man with up to 4 player co-op action and puzzles that are only solvable in mutliplayer, requiring more than one person to solve them.  On top of the exclusive puzzles in multiplayer, the single player and the mutliplayer games are two completely separate campaigns with no relation to each other whatsoever (to make that clear, you are essentially getting two games for the price of one with entirely different experiences). 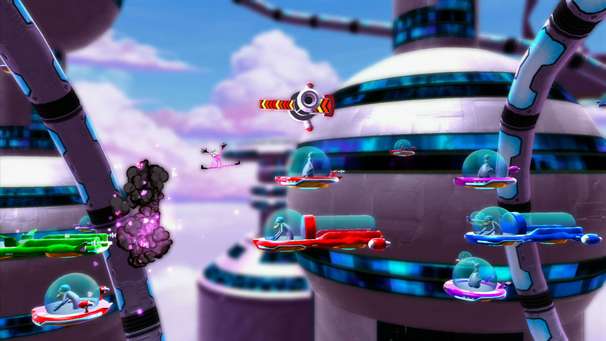 Now some additional things have changed in Ms. Splosion Man other than you are now a female exploding psychopath.  The environments have also changed slightly, which is pretty cool for a platformer with outdoor areas and sunsets as well as sunrises too.  There is also the added feature of the level select which is set-up like a game board, just like an old school game where you must move across the lines to your next destination granted you have unlocked by beating the previous level.  The game compared to the original Splosion Man is much harder, requires more thinking to figure out how to complete puzzles and the puzzles themselves are even harder to execute.  It can get frustrating at times but it has to be one of the most creative, humorous games on the market.  Plus it feels great once you have completed these tasks and Ms. Splosion Man is packed with content with a lengthy campaign and multiplayer ending in the co-op campaign.  There is even a Mall you can visit where you use coins earned from completing levels to purchase anything from Avatar Items to Music, to Art, Themes and Pictures.  For 800 Microsoft Points, Ms. Splosion Man is well worth the price and you are bound to get a laugh out of it no matter your sense of humor.

Very creative and one of the most humorous games on the market. Probably one of the best platformers to date.

Can be extremely difficult at times, as figureing out a puzzle is only half the battle because it then has to be accomplished. This also makes co-op even harder as now 1-4 people must be perfectly precise and the game it so funny, it certainly makes it hard.

Final Verdict:
SUPERB
This is a kind of unique arcade game that you are not going to find anywhere else, with it's wonderful humor and challenging tasks, I doubt anyone would dare try or even could re-create such a masterpiece.
A copy of this game was provided by Developer/Publisher/Distributor/PR Agency for review purposes. Click here to know more about our Reviews Policy.