This sequel to the first Ninety-Nine Nights was developed by Q Entertainment & Feel Plus and published by Konami.  Just like its predecessor, N3-II is a Hack ‘N Slash in its purest form, but what sets it apart is the addition of some platforming puzzles and RPG elements. It also has a better story than the first, which is quite something for the genre.

A Hack ‘N Slash game is all about in the game-play. Mash some buttons, watch a crazy string of attacks and send enemies flying. It’s what we play these games for and N3-II isn’t lacking at all. It’s extremely simple to get the hang of too: The X and Y Buttons are your main attack buttons, with X being Light Attack and Y being Heavy Attack. The B Button is your character-specific Ability. A Button is Jump. Right Trigger is used to roll in any direction using the Left Stick, and Left Trigger blocks attacks. Left Stick is used to move your character and Right Stick rotates the camera. You can even click the Right Stick to zoom the camera in or out. Left Bumper allows you to use an Active Skill and Right Bumper doesn’t do anything, so you don’t need to worry about that one. lol Pressing the Back Button zooms the map in to give a detailed display of your current location. 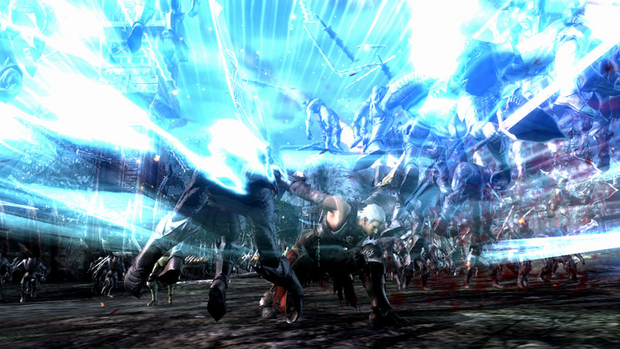 Active Skills (cast with the Left Bumper + either A, B, X or Y) are special attacks every character can do. They can be either melee or magic attacks, and once you find one, you can equip it to a slot (these are related to the button which triggers it) and you can use it in a mission as many times as you want  as long as you let it recharge between uses. You can equip up to four, and there are even some Skills that can be combined with others for devastating combos. Along with the four Active Skills you can have, you can equip four Passive Skills. These boost stats like total health or damage done, or can shorten the duration of status ailments. There are even some that allow you to use Active Skills faster.

The RPG elements of the game come in the form of a level up system. You can level up three things. Your characters level, which when increased gives you more health. Your characters weapon, which makes that particular weapon stronger, and all 8 Skills, the four Active and four Passive you can equip. You need Soul Points to level up anything and to get them, all you have to do is kill an enemy. Red orbs will appear and automatically fly towards you, giving you Soul Points. The harder the enemy is to kill, the more Soul Points you get. The platforming and puzzle elements come through in each level. Just like most Hack ‘N Slash games, characters share levels throughout the story. Certain areas in each level are inaccessible to certain characters the first time through. To get to them, you need to play as a different character and solve a simple puzzle like hitting a switch or destroying a wall, which will then allow the other character to access that area. It’s a simple way to give each level a sense of replay value. 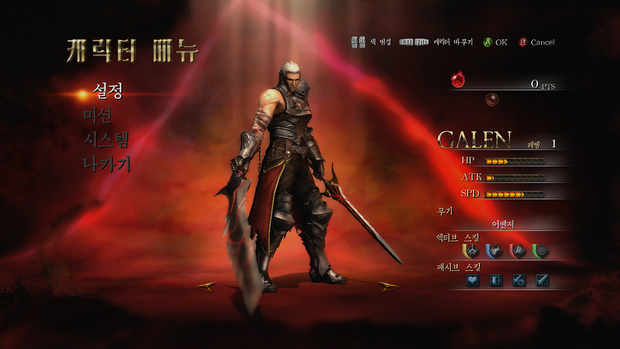 N3-II has only 5 playable characters, compared to the first game’s 7.

The one thing I can say the gameplay lacks is character variety. The actual characters themselves are different enough, but each uses two weapons, and there’s only 5 characters, compared to the first game’s 7. Not much of a difference, but enough to leave you wanting more. The combination of simple game-play with the RPG and platforming/puzzle elements thrown in make this a unique take on Hack ‘N Slash games and fans of the genre will certainly enjoy this. But, despite how easy it is to pick the game up and play, it’s HARD in the later levels. Like, frustratingly so at times. You may find yourself angry enough to throw your controller if you aren’t patient enough and rush head first into some fights unprepared. As hard as the game can become, if you work at it and try different approaches, you’ll get through it. The story follows the same basics as the first one. There’s an Orb of Light, and an Orb of Darkness, with Elves protecting the Light and Goblins protecting the Dark. What’s different in the sequel is how the Orbs are used in the story. Rather than trying to stop the enemy from getting the Orb of Darkness and summoning the Lord of The Night, you’re trying to stop him from obtaining the Orb of Light and preventing himself from being sent back to his realm.

The main focus of the story centers around Galen as he tries to repel the Lord of The Night’s forces. Along the way he meets up with the 4 other playable characters, and while Galen’s story covers the main piece, to get the full story, you need to play through each character’s story. They all take place at the same time, but each gives a different perspective on the events and a nice look into the reason each character is fighting. The over-lapping stories give you both a different look on each level as well as details to the events outside of Galen’s story, which serves a great way to bring the whole thing together. But again, the lack of characters leaves more to be desired. One or two more characters could have easily expanded the story an extra few hours. 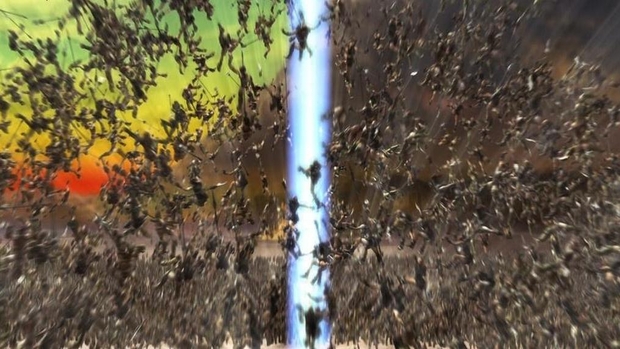 N3-II has definite improvements to graphics over the first one. There’s more detail in things like armor and weapons, as well as the level designs and textures. The enemies are simple cut and paste units of varying type, but while one foot solider looks just like the other, there’s enough detail there to make them not boring to look at as you cut them down. And there’s a nice effect of blood splatter on your screen when you do particularly extreme damage to a group of enemies. The effects on attacks are well done too. Melee and magic attacks are enjoyable to see over and over again. The level environments aren’t particularly diverse, but each one does have its own unique look to it, so it’s not bad to see them more than once. And due to the sheer scale of some of the levels, and the fact that no two characters play the same level the same way makes some of them seem like an entirely new level with a different character. And while the basic enemies may look the same, there are unique bosses each character fights throughout their own story and the designs on these more than make up for the cut and paste enemy designs.

The sounds fit nicely. A sword hitting metal sounds just like a sword hitting metal would. A shot from a crossbow sounds just like one. Lightning sounds like lightning, and an explosions sounds like an explosion. And the voice acting, something this genre isn’t praised for, is probably the biggest improvement N3-II has over N3. There’s actual tone and emotion behind the voices, and it’s made even better by the character animations during cut-scenes. The music has it’s highs and lows. The highs being when you can hear it while you go from one area to the next, it’s pretty good. The lows being when you’re in the middle of a large fight and doing nothing but hitting enemies and using Skills, those sound effects can overshadow the music. 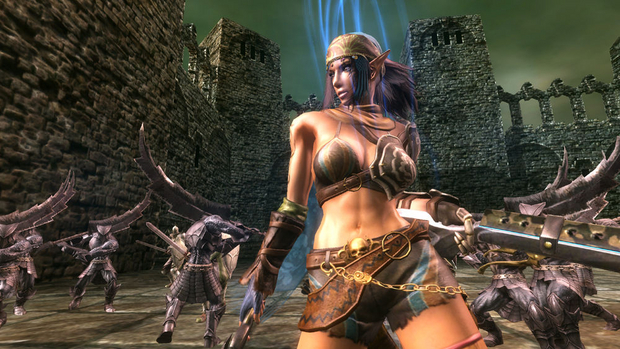 The improvements to the graphics and sounds of N3-II are certainly noticeable, and while the environments and enemies may not be entirely unique, the handful of bosses and character design on the major characters make up for that, as well as the nice effects for attacks. As a general rule, Hack ‘N Slash games are heavy on the action, light on the story, and this leads many of them to be somewhat short on the initial play-through, but the game-play is what brings us back for more. The same applies with N3-II, though to a lesser extent. A complete play-through for all 5 characters could run you anywhere from 15-25 hours, since some levels are so huge that they can take up to an hour or longer on your first run through them. Subsequent runs through these levels though are much faster, but it’s those sometimes hour long levels that add time to the game. And not in a bad way either since the game-play is certainly enjoyable. And since certain areas can only be accessed by a character AFTER playing as a different one, it pays to go back to each level at least once after playing with every character. There’s also a nice online co-op mode that can add to the overall time spent playing the game, and it offers good replay value since you can always try to bet your previous score and hit the top of the leaderboards. 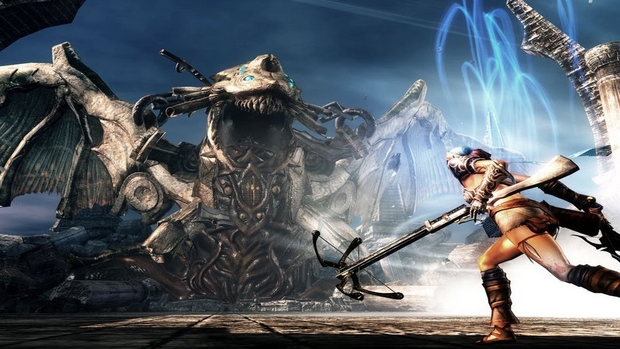 You just know that one of them will not be walking away.

While there’s not much to do besides hacking and slashing, there’s enough to keep you busy for a few days and longer if you decide to play online. As mentioned, this game improves on practically everything the first one offered. It’s got solid gameplay, online co-op, overlapping stories and ONE MILLION ENEMY TROOPS. I’m sorry, I just had to get that in here somewhere. While the game doesn’t actually have that many enemies to cut down, it is on a very large scale for the genre. If you’re a fan of the first game, or just the genre itself, N3-II: Ninety-Nine Nights is a must play. And even if you aren’t a fan, how can mindlessly cutting up enemies be boring?

Final Verdict:
FAIR
Just how many disposable minions does this dude have, anyway?
A copy of this game was provided by Developer/Publisher/Distributor/PR Agency for review purposes. Click here to know more about our Reviews Policy.