The developers discuss what’s new for the series with NASCAR Heat 3.

NASCAR Heat 3 will bring with it a lot of improved features and will emphasize on dirt racing. In the game’s career mode, players will start off in the Xtreme Dirt Tour and then play their way through to the NASCAR National Series.  To learn about all of these new features and about the game’s development, Gamingbolt reached out to the developers with some questions and Executive Producer Sean Wilson answered them. 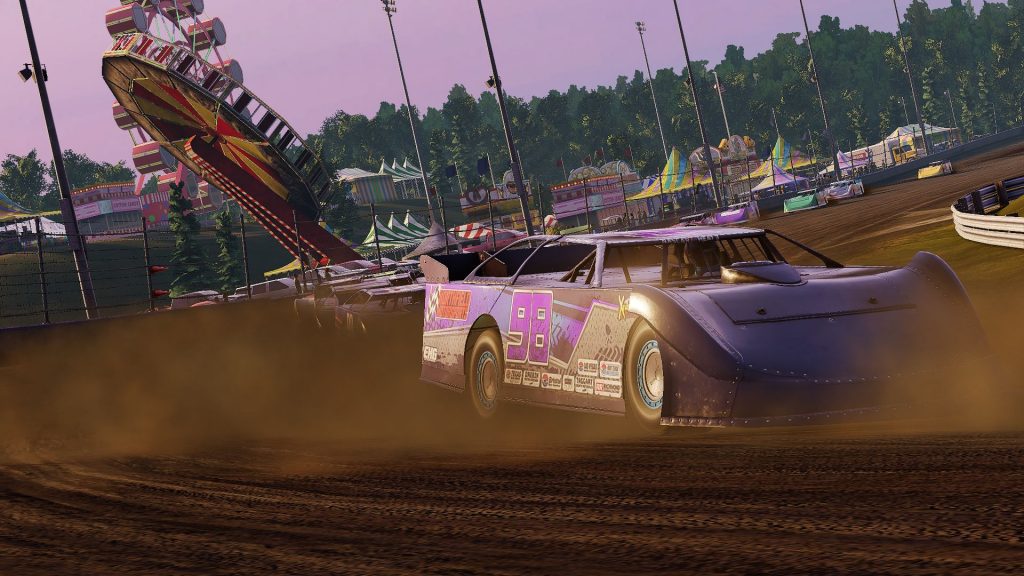 "In real-life, a ton of drivers get their starts in dirt, so we thought it’d be compelling to start you in dirt and ask you to prove yourself on local dirt tracks before getting the call to race in a NASCAR National Series"

It seems like a main point of focus with this game has been dirt racing. Why did you choose to go this route?

There were a few reasons. First, we added dirt racing last year (Eldora Speedway), when we added the Camping World Truck Series, and it was a big hit. Eldora was one of the most popular tracks online. Second, dirt racing offers a nice alternative to normal stock car racing, and it’s just fun. The tracks are visually compelling and require a different set of skills to compete. We also knew we wanted to upgrade our Career mode and dirt racing naturally slotted in. In real-life, a ton of drivers get their starts in dirt, so we thought it’d be compelling to start you in dirt and ask you to prove yourself on local dirt tracks before getting the call to race in a NASCAR National Series.

We’ve learned that the game will have a deeper career mode. What can you tell us about this?

As I mentioned above, in this year’s Career mode, players will start in the Xtreme Dirt Tour and work their way into the NASCAR National Series. Beyond that, we’ve really revamped the whole experience. Players can choose to either be a “driver” or an “owner.” When you choose a driver, similar to last year, you get your start by racing in Hot Seats. Hot Seats are opportunities to fill in for other drivers. Those rides will get you noticed, lead to contract offers, and you will work your way to the Monster Energy NASCAR Cup Series. As a driver, your sole focus is driving, but you can also be an owner and own your own teams. If you choose that path, you will have to buy and maintain your cars, hire and train your staff, and upgrade your facilities. You still drive the cars, but your destiny is completely in your hands. That’s the basic rundown. We also brought back and polished the driver reputation feature. Earn friends or make enemies and that will impact your on-track experience. If you have any issues in your career, you can lean on your career mentors. These real-world NASCAR personalities will provide the guidance you need to become a champion.

Are there any major differences in how the cars handle in this game as compared to the previous entries in the series?

The car handling is tweaked and tuned every year. This year was no different. We put a lot of time into the physics model, especially in terms of how the cars react when making contact with other cars. We’re also introducing a variety of pre-built custom setups. These are perfect for fans who want to get more speed, but fear the complexity of the custom setup menu. There are 9 custom setups ranging from loose to tight. Also, a lot of work went into the new Xtreme Dirt Tour car physics model. Those cars handle differently than every other series, including the truck dirt model.

What exactly will the ‘Xtreme Dirt Tour’ bring to players?

First of all, the Xtreme Dirt Tour will feature 9 tracks. As mentioned above, Eldora Speedway returns, but we’ve also added 8 new dirt tracks. The XDT cars will also be available to race in all other modes, including online multiplayer. Beyond that, dirt racing is simply an entirely different way for players to compete in NASCAR Heat 3. Unlike driving on asphalt or concrete, it’s more about drifting. It takes practice to maintain your speed through the turns without spinning your tires. The overall atmosphere at dirt tracks is also unique. They’re all small town tracks with a seating capacity of less than 15k. In Career, you really feel like you’re just starting out.

Are there any particularly unique tracks you are excited for players to experience racing in?

We built a fantasy dirt track named Jefferson Raceway. That’s my personal favorite of all the new tracks. It’s a fantasy dirt road course, a track type that we’ve never had in the Heat series. I think Jefferson will be popular, especially in online multiplayer. We also converted Bristol and Richmond to dirt tracks. Racing a dirt surface on Bristol’s high banked turns is a lot of fun. 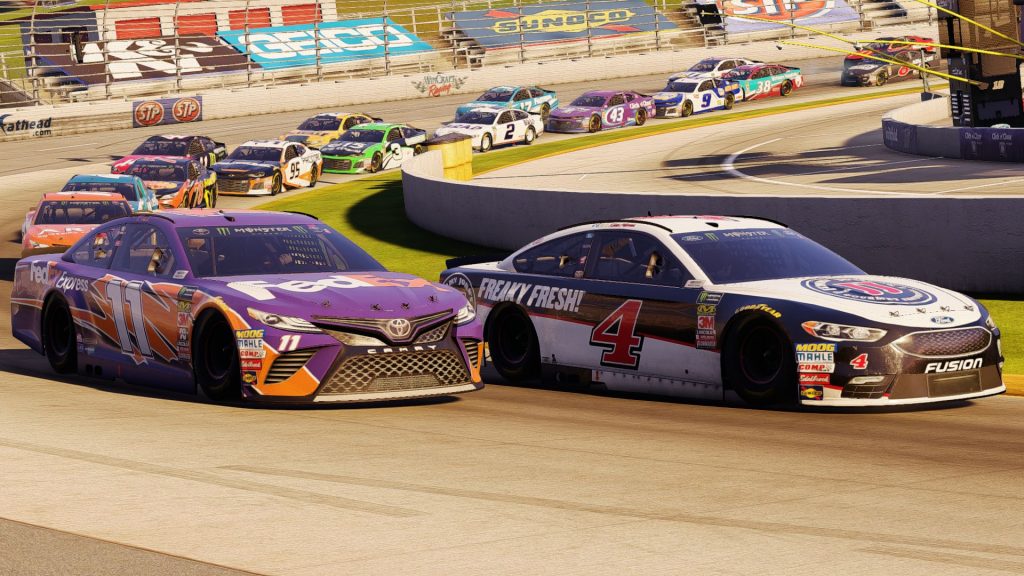 "When racing in Career, you’ll have the opportunity to join an actual NASCAR race team and compete in one of your favorite rides"

How do motorsports teams function in this game?

When racing in Career, you’ll have the opportunity to join an actual NASCAR race team and compete in one of your favorite rides. For example, maybe you’ve always dreamed of being the driver of the #24 Hendrick Chevrolet. Well, if you do well enough, you may get a contract offer from Hendrick Motorsports and have that opportunity. When signing contracts with teams, you can also choose to create your own car and join a team, instead of replacing an existing team member.

What can we expect to see with the multiplayer aspect of the game?

In addition to dirt racing being available online, we’ve also created the all-new Online Tournaments mode. Tournaments will be weekly events that pit drivers against others from around the world. On Monday-Friday, you will have the chance to lay down your best lap time at that week’s track. Your time will get posted on a qualifying leaderboard. At the end of the week, based on your qualifying position, you will be placed in 1 of 3 brackets. On Saturday-Sunday, you can then compete in the Finals against others from your bracket. The player with the best time in each bracket will be tournament winners. Your wins will be tracked and shown on in-game leaderboards for all to see. We’ll be releasing more details about this mode before September 7.

What are your post-launch plans for the game?

We’ll be releasing one large paid DLC pack each month, through December. Those packs will include paint schemes and Challenges and sometimes new spotters and custom car templates. We also, again, plan to have monthly free DLC packs. In addition, players can pick up the 2018 Hot Pass to get all that DLC at a great discount. Plus, we’ll be releasing game updates/patches throughout the remainder of 2018.

We’ve learnt that the game will offer more of a challenge as compared to its prequels. What will be some of the changes at the higher difficulties?

We’ve tuned all difficulty levels to make the AI more competitive based on the player’s skill level. In addition, we’ve specifically tuned the harder difficulties to be much more challenging. This year, those harder levels are no joke. For those players who want the challenge, they’re going to get it. Heat players can also expect smarter pitting strategies from the AI, among several other AI upgrades.

NASCAR Heat 3 is a heavily licensed title, so getting all the car art approved and added to the game is always a challenge. In addition, we not only built 8 new tracks, but we still had to maintain the 30 legacy tracks. And many of those tracks, like ISM Raceway and the Charlotte Roval, required extensive overhauls. Generally, almost every asset in our game requires an outside approval, which made hitting our deadlines an exercise in anxiety management. 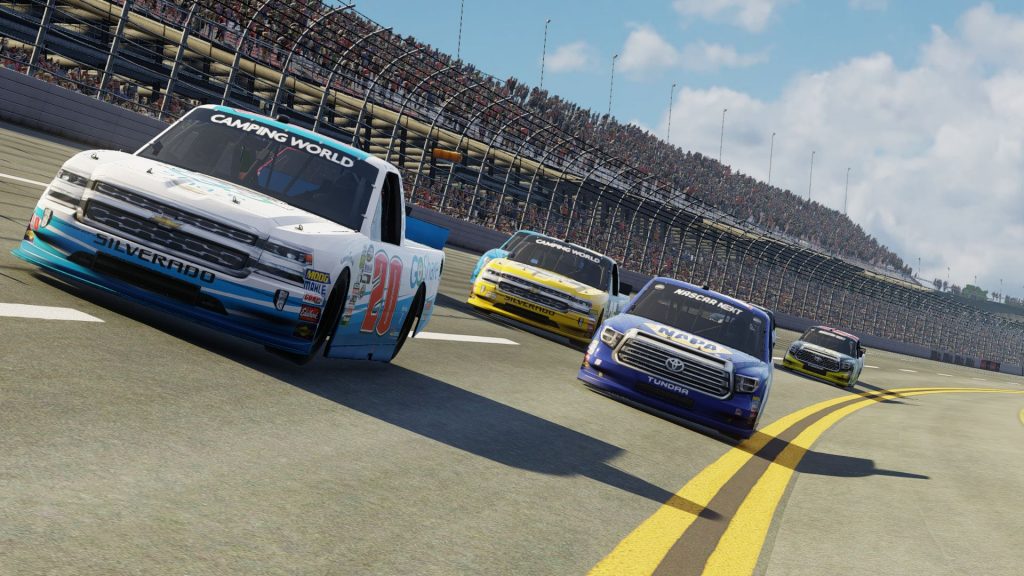 "Fan feedback is key to our success. We made huge improvements from NASCAR Heat Evolution to NASCAR Heat 2. The changes in NASCAR Heat 3 are even bigger and better. "

The series has been subjected to mixed reactions. How are you addressing these in this game?

Fan feedback is key to our success. We made huge improvements from NASCAR Heat Evolution to NASCAR Heat 2. The changes in NASCAR Heat 3 are even bigger and better.  Our social media team spends a lot of time reading feedback. I read a lot of the feedback myself, and interact with fans on Twitter. The feedback we get helps us determine what gets added year after year. In short, we’re always listening and working to make the game better.

Same as above. No specific enhancements, but we will remain open to it in the future.

We’re incredibly excited about what Microsoft is doing with the console and the possibilities it opens up for us in the future. As of now, however, there are no specific enhancements planned for the Xbox One X version of NASCAR Heat 3, but we remain open to it in the future. 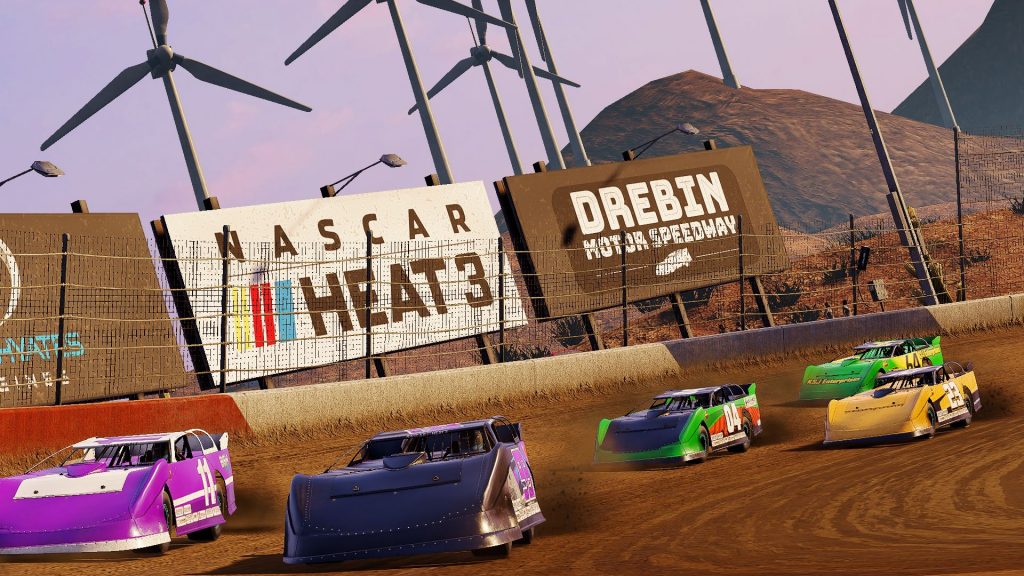 "And for better or worse, game companies are businesses, and businesses will always look for ways to increase their bottom lines"

We don’t have plans to release NASCAR Heat 3 on the Nintendo Switch. It’s a fun console and I hope we get to do something with it in the near future.

My assumption is we’ll just have more power to do bigger and better games. With that in mind, we’re not only trying to make NASCAR Heat better on current platforms now, but we’re also preparing our game code and assets to transition to be ready for more power. Beyond that, I’m sure a primary focus of future consoles will be online connectivity. I’m hopeful we’ll get even more new and innovative options when it comes to competing with other gamers.

What is your take on the on-going controversy of loot boxes and microtransactions?

From a straight-up business perspective, I understand why companies have included microtransactions. They’ve been successful in generating extra revenue, plain and simple. And for better or worse, game companies are businesses, and businesses will always look for ways to increase their bottom lines. If it stays about cosmetic content, and ideally if that content is created after the game is submitted (and therefore required an extra expense to create), then the microtransaction model is probably ok. But it’s a tough pill to swallow when someone asks me to pay extra for content that is already on the disc, or even worse, requires that I pay extra to win or be competitive. That crosses a line, and I understand the frustration.