Cheaply made, poorly put together and unappealing to anyone who isn’t a fan of NASCAR.

This bit from puppeteer and comedian Jeff Dunham was all that echoed in my mind as I played through NASCAR Heat Evolution. I’m a self-confessed “not-sportsball” person, and even placing NASCAR within that category requires some mental gymnastics for me.

Of course, I’m allegedly a professional critic, and so I’m going to try to put that all aside. I’ve played tons of driving games, not to mention driving in daily life. Perhaps this has the kind of polish that makes it enjoyable just to drive.

Well, this outlook didn’t last long. Right from the menu I was greeted with a paltry number of gameplay options (Which I’m not neglecting, they literally all result in the same gameplay) as well as some of the most generic and offensively bad soft rock I’ve ever heard. They had one of the cars front and centre too, which was decidedly a low point. The cars are supposed to be the stars of the show, and while they seem to have had the most effort, they’re terribly underwhelming compared to the likes of DriveClub or the upcoming Forza. 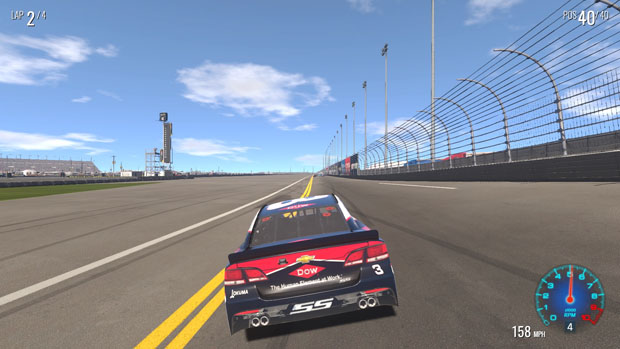 "The cars are supposed to be the stars of the show, and while they seem to have had the most effort, they’re terribly underwhelming compared to the likes of DriveClub or the upcoming Forza."

They don’t even rate next to Gran Turismo 6 on PS3. Vehicles are terribly flat, with details like the lights looking like poorly made stickers on the car, and the interior of the vehicle only modeled as far as what you’d ever see from either outside the car or within the driver camera view. This cynical inattention to detail carries right over to every other area, with a balloon animal pit crew and flat, lifeless textures on each track.

Tracks, by the very nature of what NASCAR is, have no variation outside of width and sometimes incline of the outside. Sometimes it’s the middle of the night, and the corporate sponsorships along the side change around. It’s hardly fair to count it against a NASCAR game for using staying true to the NASCAR circuit, but it’s worth pointing out the repetitiveness of the whole gameplay loop. Not to repeat myself, but you’ll be making a lot of left turns.

I have to call into question the clear division between how rigidly the game sticks to NASCAR in some areas, while being totally incompetent in others. Driving in video games is something we’ve had since we figured out scrolling, and while there is variation depending on purpose, it should be expected by this point for vehicles to behave like vehicles.

Driving in NASCAR is super stiff, to the point of breaking the immersion of driving one of these engineering marvels. Regardless of which racer I used, it never felt like I had total control of my turning radius at any speed. Trying to strategically use the break for anything is an exercise in futility. A slight tap while attempting to take a (left) corner would immediately result in a near stop even at 150 miles per hour and send my car spinning out instead of my reasonable assumption of drifting. 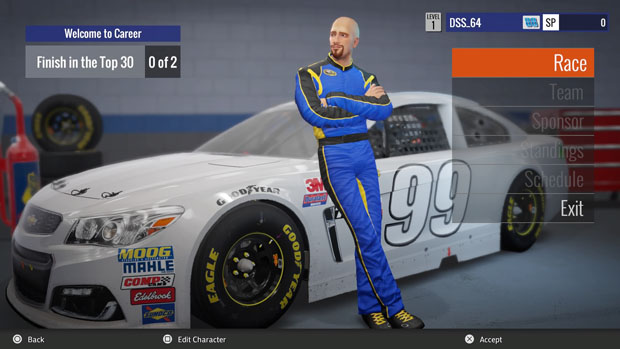 "The game and I have very different ideas of what damage is supposed to look like in a 2016 title."

Of course, the best part of casual NASCAR watching is the 35 car pile-ups. NASCAR Heat Evolution advertises damage on its vehicles, and I never expected much seeing the models. What I got was literally nothing. I was purposely trying to get myself wrecked, even went reverse around the track and swerved into a head on collision. Not sure I expected that to result in me leaping into the air and barrel rolling, but that’s what I did.

The result of these boredom fueled escapades was a car that still looked the same as it drove out of the pit, but a sign at the bottom of the screen about how certain parts were damaged. It destroyed my top speed but handled the same. My experiment did let me know that the game and I have very different ideas of what damage is supposed to look like in a 2016 title, so it only cost me disappointment.

The sound design helps carry what little immersion there is to be found. Engine noises and pit chatter helps keep you focused and alerts you to other racers around you. Impact sounds feel good even if the impacts themselves carry all the weight of a small fart. It’s a good thing they did so well with that, because that’s all you’ll hear during races. The menu has a very small selection of repetitive tracks that match the demographic this game is cheaply trying to appeal to, but thankfully you’ll forget them as soon as you heard them.

Unlike the machines used in the event NASCAR Heat Evolution tries to simulate, from top to bottom this game is cheaply made, poorly put together and not going to appeal to anyone who isn’t a fan of NASCAR. If anything, this little diversion did nothing to convince me of the appeal. Rather it made me question what anybody could possibly find enjoyable about this.

Sound design is OK, but that’s all that really brings you into the feeling of driving.

Final Verdict:
POOR
NASCAR Heat Revolution is going for the audience it has and long gave up convincing you that NASCAR is a worthwhile video game. Visuals aren’t acceptable on PS4 level tech, or even PS3 tech. The most disappointing part is no real damage system.
A copy of this game was provided by Developer/Publisher/Distributor/PR Agency for review purposes. Click here to know more about our Reviews Policy.