Once again 2K Sports comes out on top in the world of NBA video games.  While the last few years have not brought many new ideas to the table to the series, the solidity and fluidity of the gameplay makes up for it and then some.  NBA 2K10 is the most realistic representation of the National Basketball Association yet.

Now the signature of 2K basketball games is its gameplay and that has not changed this year.  Animations look better than they have before, the in-game pace has been increased to feel more realistic and signature styles from the players are once again accurately represented.  While it might sound minor, a new turbo system has been added to more readily let you know when a player’s stamina is running low.  While holding down the turbo button a gold bar will appear and eventually deplete.  Once it is depleted there will be a dull blue bar which is your players stamina and if you continue to use turbo that meter will eventually drain as well.  This new system helps especially when playing with manual substitutions on to know when to take players out.

The lock-down defense system has returned in this year’s installment and is better than ever.  When the system was present a couple years ago, Shaq could guard Chris Paul on the perimeter with ease.  Luckily it is more realistic than that now.  You still hold down the left trigger and your player will gravitate and stick to the ballhandler to a certain extent but requires a lot more player interaction this time around.

Another plus is all of the signature styles from the players.  When you shoot the ball with Shawn Marion he will have that horrifically ugly looking shot that seems to go in more times than it should,  Kevin Garnett has the pretty turnaround fadeaway and Shaq has the most infuriating free throw animation to date.  However with all of this good about the gameplay there are some negatives to this year’s edition.

First and foremost it is extremely easy to get into the paint and score.  It seems like the AI (artificial intelligence, not Allen Iverson) has been dumbed down when it comes to defense.  Sure there are sliders that can be adjusted to make it more realistic but it should not be necessary to mess with those.  Secondly even on the earlier difficulty settings there is some pretty harsh rubberbanding AI.  At one point I was ahead by 15 points going into the fourth quarter (on four minute quarters) and the other team suddenly decided, “Oh wait I’m the computer.  I think I’ll win now.”  Their defense became much tougher, I could not sink shots that had been falling the entire game and everything was going in for them.  While not a gargantuan problem it can still be quite frustrating. 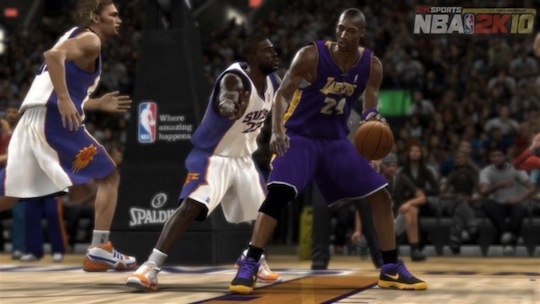 Kobe Bryant is the cover athlete for NBA 2K10 and yes, he is very good.

Next up are the graphics in the game which are great.  Character models are highly detailed, coaches (and some assistant coaches) can be identified and the crowd moves more realistically.  There is really not a whole lot to say about the graphics otherwise besides that they are better than ever and look great.

The presentation in NBA 2K10 is fantastic.  Much like the turbo this might sound like a small improvement but the menus are easier to navigate.  It is easier to go through multiple layers of menus without becoming confused about where to go next.  However part of the presentation that is phenomenal are the graphic overlays that occur while you’re playing.  First of all if you are connected to Xbox Live or the Playstation Network, you will get up-to date roster changes daily yada yada yada yeah that is still cool.  However even if playing an exhibition match against the computer, live stats for players in the game you are playing will show up.  For example I was playing as the Oklahoma City Thunder and passed the ball to Kevin Durant on the wing.  After having the ball in his hand a few seconds an overlay popped up that said he was averaging (I don’t remember the exact number) somewhere around 25.5 points per game which at the time was his real life average.  I found this to be awesome and immersed me even more in the experience. 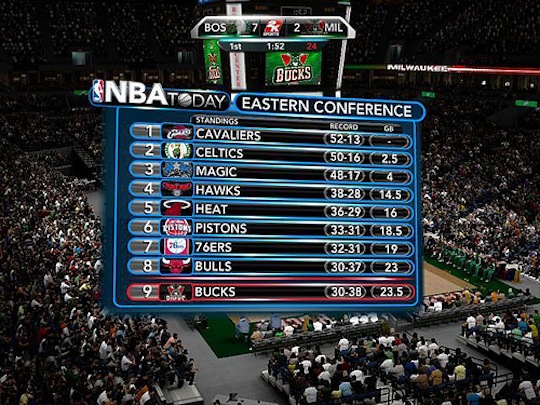 Overlays such as this one will change dynamically to correlate with real life stats and standings with accompanying commentary.

Sound is up next and 2K succeeded once again brilliantly.  The licensed soundtrack in the game is great and is my favorite one of the year.  It is once again primarily hip-hop and is catchy sometimes to the extent where I would wait to start a game until after the menu song was over.  The announcing is also once again solid.

Kevin Harlan returns and does a fantastic job and then there is Clark Kellogg.  Admittedly he is not one of my favorite commentators around but he has stepped it up this year.  Much of that is due to the dynamic commentary in the game.  Remember the actual statistically overlays from earlier?  There is commentary to go along with them and they actually discuss how the player is doing in real life.  They also give more detailed backgrounds on players you might not expect such as Kirk Hinrich of the Chicago Bulls whom I was playing as at the time.  All in all the sound is great.

When it comes to modes this time around there is one major addition which is My Player mode.  It is somewhat analogous to Superstar mode in the Madden franchise where you create your own character and work your way up the ladder.  Except in 2K10’s mode you start off on a summer camp team to hopefully be invited to a practice squad to hopefully be signed by an NBA team.  However this mode has some blemishes.  While playing the actual games you have a letter grade in the corner of the screen that will fluctuate depending on your play.  Sometimes, though, it seems a little harsh.  For example I was graded down while playing as a three point specialist when I took a wide-open three and missed.  The game told me it was a bad shot selection and counted me off.  And the mentor type person you have will sometimes become angry with you for no good reason.  One time he said my defensive play was terrible because I allowed my man to score two points on me . . . what?!  This mode could be very good going forward but only if it acquires some much needed changes.

I’ll briefly touch on the online.  Yes, there is online and yes it is still solid.  You can now create a “crew” with other people and take your My Player characters online and play together to increase their ratings.  There is also a pick-up game option where up to 10 people can play at once.  Yes each player on the court is controlled by an actual person.  That mode can be surprisingly fun especially because you are locked to a single position throughout the game so you need to play your role.  There are of course those that feel that it is more fun to run around in circles at half-court but overall it is a very fun mode.

NBA 2K10 is another solid outing for what has been the dominant NBA franchise for the better part of the last decade.  This year there are no monumental additions but tweaks that make the game feel better.  2K definitely can improve their My Player mode and some of the AI issues but if you are looking for a solid game of basketball, look no further than NBA 2K10.

Gameplay is as solid as ever, signature styles still look good, real life stats integrated into games along with dynamic commentary, online is still solid, music is great

Some AI issues, My Player mode doesn't work as well as it could have

Final Verdict:
SUPERB
NBA 2K10 once again reigns supreme as the NBA game any fan should buy.
A copy of this game was provided by Developer/Publisher/Distributor/PR Agency for review purposes. Click here to know more about our Reviews Policy.