Other sporting sims will be hard pushed to match NBA 2K16 in terms of quality this year.

Visual Concepts’ NBA 2K series has pretty much nailed its basketball games in recent years, producing genuinely impressive sims both in terms of gameplay and looks. So it’s no mean feat that this year’s edition is actually leaps and bounds better, offering perhaps the most comprehensive representation of the sport – ever.

There’s no doubt about it, NBA 2K16 is a gorgeous game. The visuals are absolutely staggering and ooze realism – thanks to a new physics engine, the addition of over 10,000 animations, full body scanning and improved AI. It looks and plays like the real thing. Even the crowds and arenas take on a new level of visual splendour. Aesthetics aside, the audio is fantastic too – a booming soundtrack and a wonderfully scripted – but natural sounding – commentary really add to the overall sense of realism.

It’s undoubtedly some of the most seamless commentary I’ve ever heard in a sports game, and each play is detailed, highlighting defensive frailties or offensive aplomb, while the pre- and postgame chatter really helps to draw you in. It feels almost broadcast quality – like you’re actually watching the big game on the TV. “Here’s the screen, he’s gone on the inside. It’s good on the triple, he’s got 10 points. He’s sensing this is a critical time in the game.” It just sounds authentic and adds hugely to the atmosphere. Other sports games should take note. Presentation wise… it’s a slam dunk! 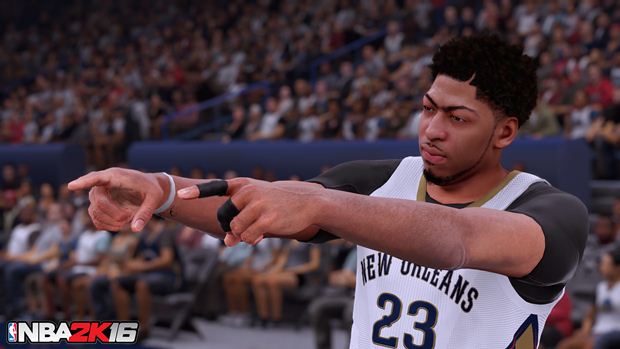 "Importantly, the servers seem to have been shored up this time round too and perform much better than last year. We had no problems finding players online and games always ran smoothly and lag free."

And it doesn’t just look the part; it’s all backed up with loads of game modes and plenty to do too. There’s 2K Pro-AM, MyPark, the popular MyTeam card trading game and MyGM – which drops you in the shoes of a General Manager to oversee the day-to-day running of a franchise. The new Play Now Online mode is well worth dedicating some time to as well – letting you take on like-minded souls online as you attempt to work your way up the rankings.

Importantly, the servers seem to have been shored up this time round too and perform much better than last year. We had no problems finding players online and games always ran smoothly and lag free.

A word of warning though… the learning curve is kinda steep – especially if you don’t live and breathe the sport. While series’ veterans will be in their element, players new to the series will surely struggle.

The controls, plays, tactics and rules are all there – but they’re tricky to grasp out of the box. The accompanying tutorial videos provide a brief insight into the fundamentals of the game but these lack enough depth to really be helpful. Even having watched them repeatedly, the refined control system still proved tricky – and plenty of experimentation and practice was needed to understand the full effect of the various buttons. Much of my early gameplay consisted of sprinting, basic passing and failed attempts at three pointers. My defence was shoddy and I gave away an innumerable number of fouls. With persistence and a little practice, however, fake passes, step throughs and spin shots started creeping into my game and became second nature. 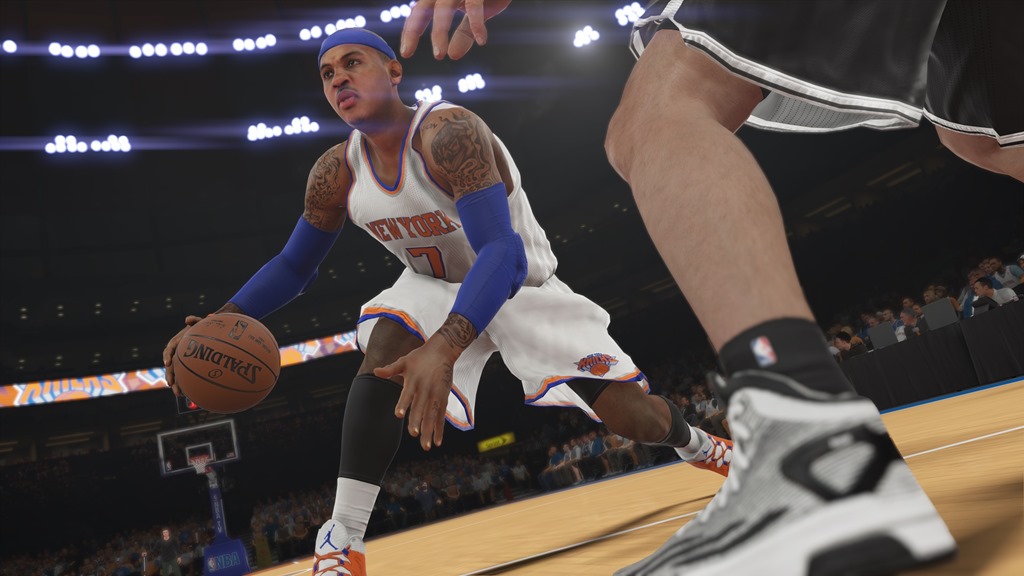 "Just like last year, the game lets you customise your player, tailoring his attributes and appearance. There are plenty of defaults to wade through but face scanning once again rears its “ugly head” too."

Get to grips with the PRO STICK (the right stick) and even more offensive options and dribbling abilities are available to you. You’ve really got to persevere to unlock all that NBA 2K16 has to offer and get the best out of the game. Fortunately, GamingBolt has published this handy guide to help you on your way too.

Among the additions headlining this year’s game is the MyCareer mode, with legendary film maker Spike Lee being called upon to pull the strings and concoct an absorbing background story . The story works reasonably well – adding enough meat to the proceedings but some of the acting is a little hammy.

It tells the tale of a guy called “Frequency Vibrations”(!), a young high school player who’s got what it takes to dominate the sport. Lee’s “Living ‘Da Dream” narrative takes players on a journey from high school through to college and then the big leagues. It’s an enjoyable affair, filled with contract discussions, practice sessions, rivalry and of course the matches themselves. The voice acting is strong and the cut scenes occasionally lengthy but they’re decent enough – and, thankfully, skippable. This is all about the pressures, trials and tribulations off the court as well as on it. It won’t be to everyone’s tastes but personally, I thought it was a nice touch and quite entertaining.

Just like last year, the game lets you customise your player, tailoring his attributes and appearance. There are plenty of defaults to wade through but face scanning once again rears its “ugly head” too. It means you can blow the dust off the Kinect camera and use it to pinpoint thousands of reference points on your face, which are then magically applied to a character model – literally putting you in the game. It sounds awesome on paper, especially as the high quality of the graphics suggest a “virtual me” would look pretty decent. It didn’t! 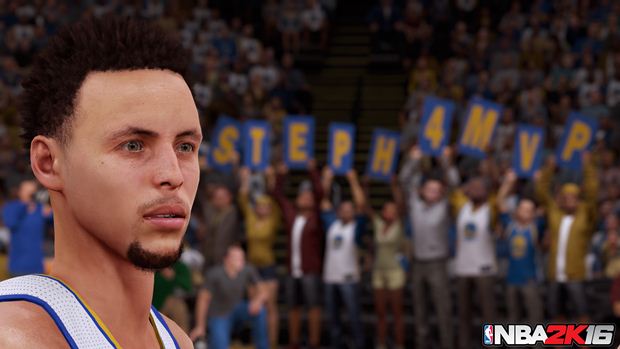 "Spike Lee’s story mode will inevitably divide opinion – a bit too structured and cheesy for many – while the game’s learning curve is huge and almost off-putting."

A simple process of sitting in front of the screen and slowing moving your head from left to right is all that’s required – with Kinect doing all the complicated stuff to transfer your likeness to the screen. My first few attempts failed (blamed on the lighting and the fact I wasn’t moving slowly enough) so I prompted to retry. I obliged, although the result again wasn’t too flattering. The end result was me looking like the offspring of Sloth Fratelli from The Goonies. Other attempts were equally unsuccessful – one of which left my eyeball floating onscreen, seemingly unattached to the rest of my head, while a weird nose/mouth combo looked like I’d suffered some horrific accident. I decided to stick with one of the prebuilt character models… and put Kinect back on the shelf to gather dust for another year. Shame.

That minor blip aside, Visual Concepts has done a great job with NBA 2K16 – building on its past experience and success to produce a title that’s even bigger and better than last year.

Spike Lee’s story mode will inevitably divide opinion – a bit too structured and cheesy for many – while the game’s learning curve is huge and almost off-putting. This isn’t a game that you can just pick up and play; it takes time to learn the controls and master all the moves. A rookie facing up to a decent player should brace themselves for a drubbing and a ridiculously mismatched scoresheet.

Still, it’s a great game – and a great example of just what this generation of consoles is capable of presentation-wise.

It broke records for the series, with over four million global sales within the first week of release, and I’ve no doubt other sporting sims will be hard pushed to match it in terms of quality this year.

The visuals are amazing and the presentation is superb. Loads of game modes and options. Seamless play both on- and offline.

Face scanning is still flawed. Story mode will not be to everyone’s tastes. Huge learning curve with inadequate tutorials/guidance.

Basketball has never looked, or felt, so good to play.

A copy of this game was provided by developer/publisher for review purposes. Click here to know more about our Reviews Policy.
Tagged With: 2k games, NBA 2K16, pc, ps3, ps4, Visual Concepts, xbox 360, Xbox One