Posted By John Capozza | On 31st, Jul. 2012 Under Reviews | Follow This Author @GamingBoltTweet

If there’s any guarantee to the gaming industry, it’s that there’s going to be a football game every year. NCAA Football 13 builds off the previous games and continues with the same excitement or boredom, depending on if you like football games or not. As far as the genre goes, you either love it and get every year, or you roll your eyes annually. The question comes down to how is it possible to make a game worth rebuying every year? 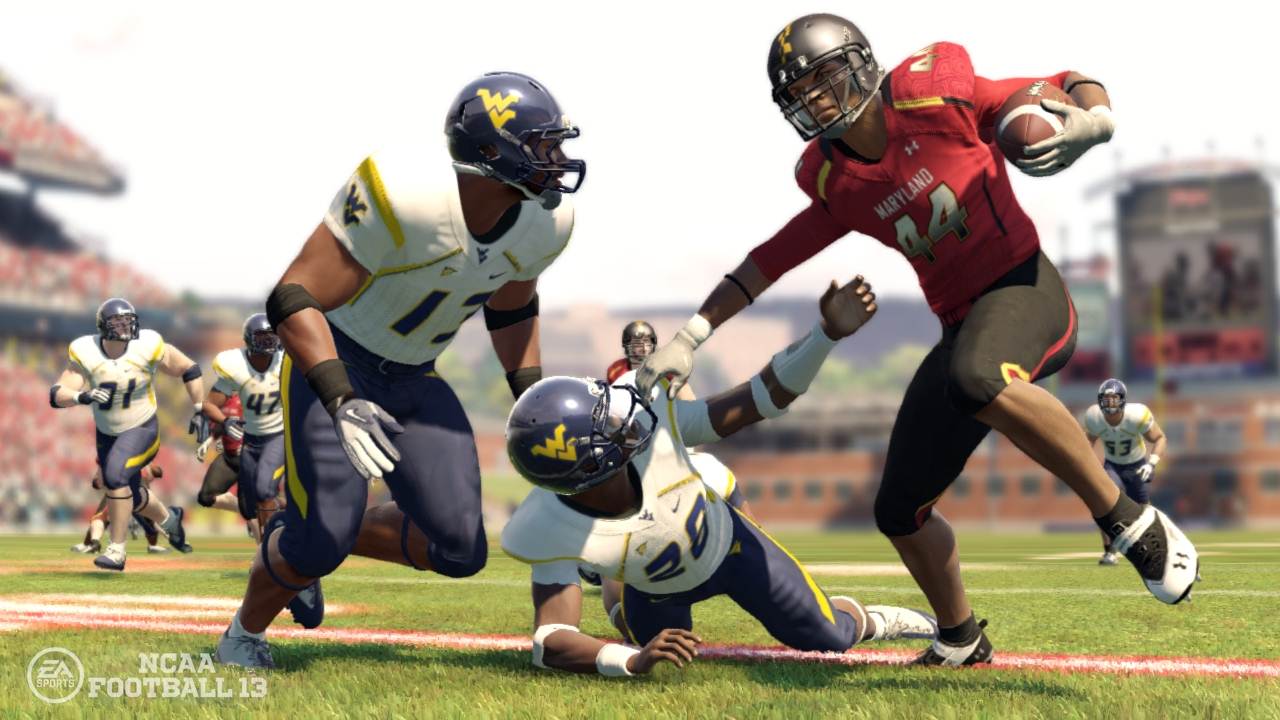 I think NCAA Football 13 is one of those games that does a good job answering the question. Why get this game? Well if you’re into football you should know about the Heisman Trophy. Only a select few college players have ever gotten the trophy and unless you’re O.J. Simpson, you’re considered to be football royalty. In NCAA Football 13 there is now a section to play as some of the greatest Heisman Trophy winners. Not only do the character models look exactly like the individuals, but there are also interviews with the winners. You can play their career to see if you’re as good as the legends or better.

The more you play and meet those goals, the more interviews get unlocked. There are also two features that make this game play also stand out. The first is that you only play when your selected character plays, allowing you to skip plays you are not involved with, and cuts down on wasted game time. It is completely random though and if you have a running back selected there might be times where you could drive your team to the 5 yard line and then get replaced for someone else to get the touchdown. The second feature which is also extended to Road to Glory is Reaction Time, which is a complete rip off of Max Payne’s Bullet Time.

Any game that incorporates a Bullet Time has definitely got my attention. In NCAA, it allows you to slow down time and make better judgment calls on running around defense and blockers which in turn gets you down the field and closer to the Heisman Trophy. I think without this feature, getting that trophy has to be impossible and it makes you appreciate the actual individuals who actually got one in real life without any sort of Reaction Time. These new features help push NCAA away from being the typical football game. 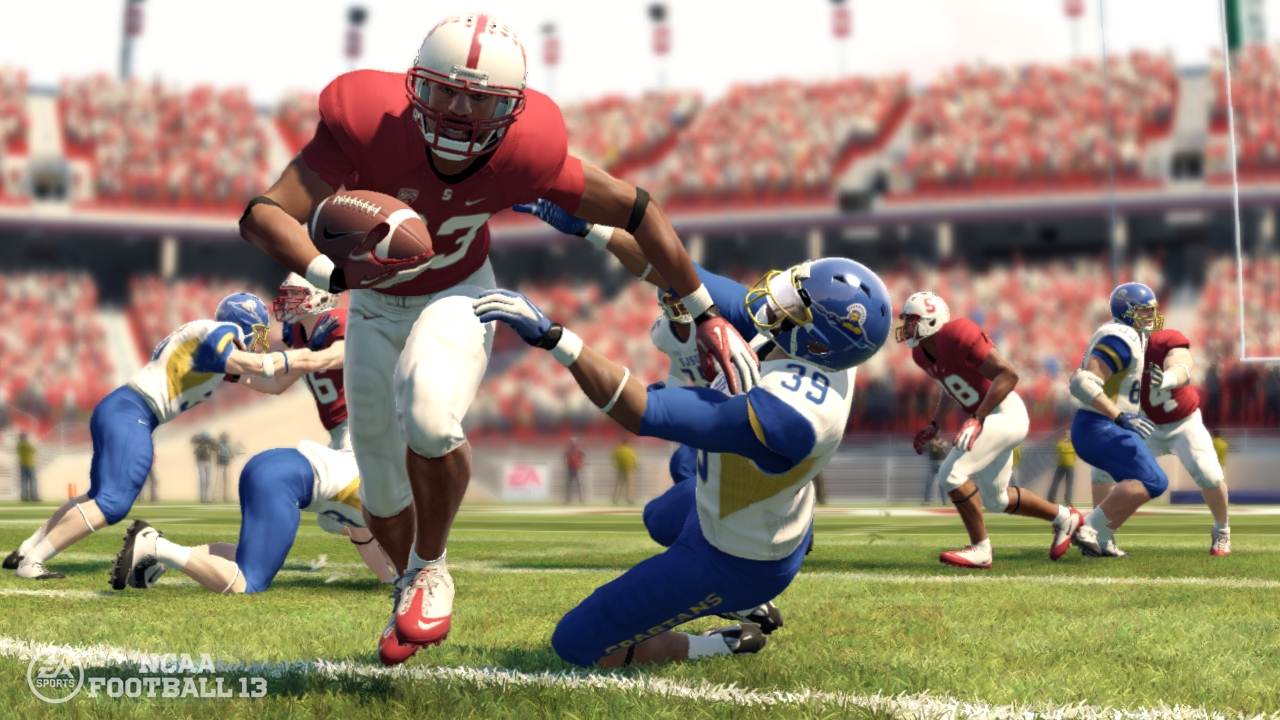 If anything can be said about this game, it most likely will take a year to get through every feature in this game. You have the classic Dynasty mode where you take a team through a season and beyond. You can also create players and have them attempt to go for the Heisman Trophy in Road to Glory, and it plays almost exactly like the Heisman section. The game is geared for the returning gamers, and casual alike. Most returnees are going to find updated and tweaked play options, moves, recruiting and more. Casual and newcomers will find sections like the 1 Button mode that simplifies all game play to mashing on one button.

After playing a game on normal mode, I found it refreshing and easy, but then realized I had almost no control to whom I could throw the ball. Mascot Challenge seemed a little less than I expected. With the word “Challenge” in the title I anticipated to run mascots through their own obstacles and maybe have a feature where I had to rally the crowd when the team was down. Instead your entire selected team is replaced with your mascot. It looks silly to see way too many mascots playing and is cute, but there’s no slap stick as they pretty much run normal plays and after a short while, the silliness runs low.

As with a game with a long franchise, it almost seems odd if there are any issues to the game, seeing how the game studio should have worked out bugs by now. However, there were quite a few issues I found in the game. My biggest complaint comes down to character models. Although the Heisman character models looked pretty decent, the characters on field seem last gen. There were good quality textures on the jerseys but player face and hair just didn’t match the quality. Audience animations were also very rigid.

You could see hundreds of characters hit the same animation and sit at the same exact time. Being at some live sporting events I’ve found it hard to get a crowd to do the wave properly, and yet hundreds of crowd members manager to sit at the same exact time, with all of two frames of animation. It’s jarring and breaks the realism of the game. I also found UCF’s mascot, Nitro’s fingers broken and jagged. When you get a cut scene with him after a good play, with broken fingers it’s a little disturbing, but it is overly distracting when you select Nitro in the Mascot Challenge and the entire team has broken fingers. More distracting though was the game performance. 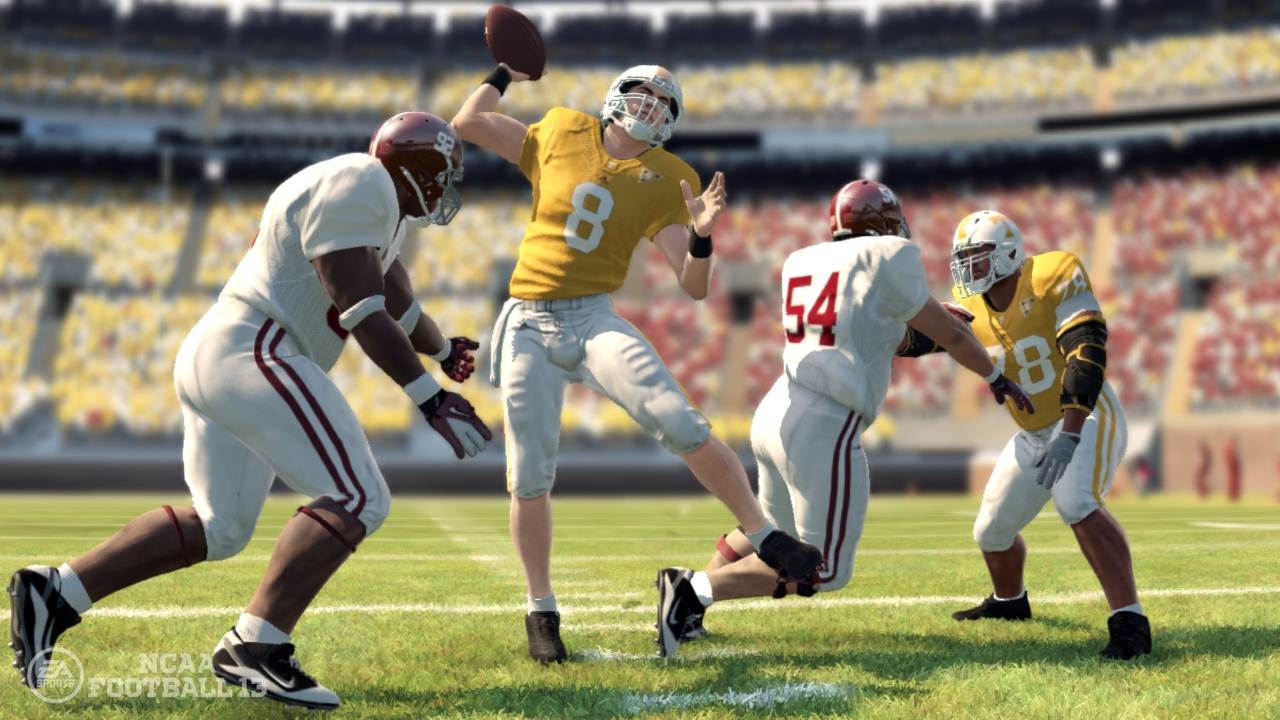 NCAA football is set up to make you feel like you’re actually watching real college games. There’s commentators talking the entire game, replay cameras, update reports, sponsored sections, and overall the game is so jammed packed that after a while the games starts to strain. All too often the game would freeze for a second here or there, but mostly as you were getting tackled. With being this late into a console cycle, having frozen game play seems out of the norm with most game studios and publishers understanding the limits to the console. I also found the section Learn How to Play completely misleading.

Not having played a football game in a while, I was expecting this to be a tutorial section. Instead it only allows you to run through selected plays in a practice field without any help or clues to button assignment.  All that info is in the Manual section which blends into the bottom of the scroll info in the main menu. If the section were renamed to Learn the Plays, it would have made more sense seeing how you’re only running play after play.

Overall NCAA Football 13 is a fun game. Returning gamers and casual/newcomers will find plenty to do in this game. This game doesn’t reinvent the franchise but with features such as the Heisman section, gamers can look forward to new ways to engaged. If you play online, you can further extend game play with creating a Dynasty online and also join other online Dynasties.

Plenty of content for newcomers and returning gamers to the franchise.

Unpolished characters and spotting performance keeps this game out of the end zone.

A copy of this game was provided by developer/publisher for review purposes. Click here to know more about our Reviews Policy.
Tagged With: EA, EA Sports, NCAA Football 13, pc, ps3, xbox 360