Over the recent few years Need for Speed games have become synonymous with illegal street racing. Although the franchise started off as a purer racing game but then evolved more into a fast and furious inspired street racer. But this time around NFS is back to its roots and for good. The focus of the game is again the real world of motor sport. But that doesn’t mean EA and Slightly Mad Studios, the new developer, have completely washed the fun part of NFS games as we’ve come to expect now i.e. drifting, customizations etc. NFS: Shift is not an all out simulator neither it is a racer rather its a blend of both extremes, and it delivers an overall package which will satisfy the fans of both Forza and Burnout.

Unlike the most recent NFS games there is no story element involved. And that’s not bad at all. These story elements are replaced by cool interface and nice videos before the introduction of each event which doesn’t drag you away from the whole nfs experience. All this blends into what happens on the track and that’s pure heart-pumping action.

First thing you’ll feel while taking the first lap of shift is almost a never before seen sense of speed in such kind of a racing game. When you are moving on 150 mph plus speed you literally feel that and that too in a very scary way. And what adds more to this experience is an extra-ordinary cockpit view. This differentiates shift from every other racing game out there. It’s a dynamic first person camera view which moves according to your movements e.g. when you brake it’ll behave realistically depicting all the g-forces and inertia you go through in real life. 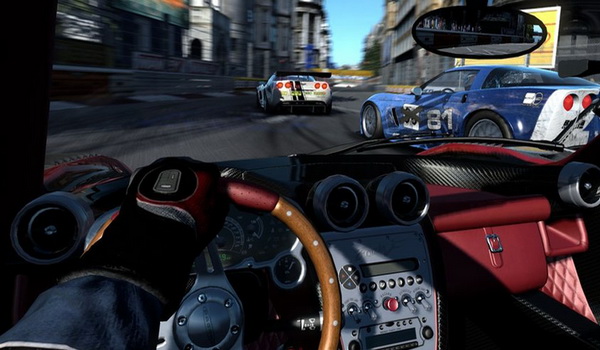 Shift’s cock-pit view is a winner!

The career mode is very well balanced. You get points for almost doing anything. You win races you get stars, you do some drafting you get points, drift and points are yours. Now this all adds up to your progression throughout the career. You unlock higher tier events and cars. Only problem is that there are only 60+ in shift which may seem a little as compared to the likes of Gran Turismo, but the good thing is all these cars are top notch due to a great selection. You can also upgrade and customize your cars and make your favorite ones little bit more competitive. Obviously this requires great deal of cash but you’ll always earn enough to satisfy your needs.

Once again the presentation in shift is top-notch. Shift offers some of the most eye-candy visuals you’ll witness in any racing game this year. Everything from car models to the tracks is gorgeously rendered. But Shift is not about good looks only, the developers have managed to provide an extremely immersive driving experience with a great deal of focus on car physics. Cars behave in a very realistic manner but not so much that will make you throw your controller. 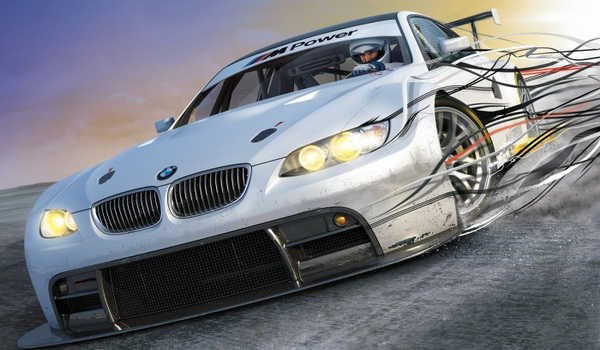 Shift’s visuals are a complete treat to the eye.

Sound is again a highlight of shift. It supports an awesome soundtrack as you come to expect from NFS games. Car engines sound great. And the all so sweet sound of rubber when you brake or drift never gets boring. Shift also offers a very simple yet fun online multiplayer which consists of very few but enough modes to keep you engaged. Quick race is obviously where you start. But there are also other modes like driver dual mode where you compete with other driver with same car provided and try to climb the ladder.

All this makes Need for Speed: Shift a must have racing game for any type of gamer. It offers almost everything you need in a racing game and will satisfy you for a long time. Shift will without any doubt provide a strong competition to the likes of Forza and Dirt 2 for the top spot, as the best racer this year.

Final Verdict:
SUPERB
Need for Speed: Shift provides a much needed shift in the franchise and crosses the chequered flag in flying colors.
A copy of this game was provided by Developer/Publisher/Distributor/PR Agency for review purposes. Click here to know more about our Reviews Policy.