How well does the moustachioed wonder translate to HD?

There is a very discernible difference between a game that is good to play and one that is good to review. This split is typified by Mario’s first Wii U outing, a classic side-scrolling Mario adventure that captures the blissful magic of the very first Mario games. The problem is how closely it attempts to mimic these retro gems, as the game plays safe to the point where it’s hard to see any meaningful additions to the New Super Mario Bros. Formula we’ve been lapping up since 2006. It remains a hell of a lot of fun, but it’s hard to grant a high score to such a conservative treatment of the Mario franchise.

The plot is as see through as ever, this time with Bowser and co. opting to take over Peach’s castle in its entirety rather than kidnapping the princess alone. It is, as always though, merely a springboard for a load of retro platforming goodness, and good it is indeed. The Mario formula returns largely unchanged, but the mechanics are tightened ever so slightly, with the level design complementing it all in such a way that this is arguably the strongest of the NSMB sub-series in terms of raw gameplay. 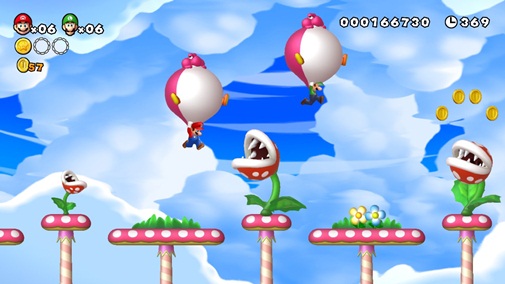 The problem comes in how all the additions and changes are so minimal. NSMB Wii added multiplayer, NSMB2 had the focus on coin collecting, but the Wii U variant has no real flavour to it by comparison. Granted, the Wii U Gamepad swoops in to offer a co-op partner the ability to place extra platforms and stun enemies with appropriate screen taps. It’s new for sure, but it feels more like that stupid star pointer crap from the Super Mario Galaxy series than like a meaningful addition to the co-op formula. It also plays havoc with the co-op mode as, whilst it allows for a five player romp, it means one player is constantly having far less fun than the others. Things are made even worse by the inability to use the Gamepad as a normal controller in multiplayer. It just seems like an oversight that limits your control options. Even worse is the lack of Pro controller support. It makes no sense that, what is arguably the flagship launch title for the Wii U, would neglect full support for this controller, especially when no motion controls are used for the bulk of the game. The Gamepad does allow you to play single player totally separate from the TV though. It’s a cool feature, but it certainly isn’t enough to grant SMBU its own identity among the deluge of other quality 2D Mario titles.

It’s not a total write off though in terms of innovation. New powers are introduced in the form of a flying squirrel suit and baby yoshis. The squirrel suit isn’t too different to the Tanooki suit of Mario Bros. 3 fame, though the ability to get a quick boost upwards mid-glide and clinging to walls add a variation to the classic. The baby yoshis are more interesting, with the different coloured beasts offering a variety of different powers. Adding to these new abilities are some alternate modes that see you taking control of your Mii, rather than the moustachioed wonder himself. Coin battles return from the Wii NSMB, with the ability to use the Gamepad screen to customise coin layout. Challenge mode provides a variety of weird and wonderful objectives of increasing difficulty. There’s a lot of avoiding the floor in this mode, and it’s bloomin’ hard. Boost Rush is the final and most refreshing of the modes, placing you on a constantly moving level that speeds up as you collect more coins. 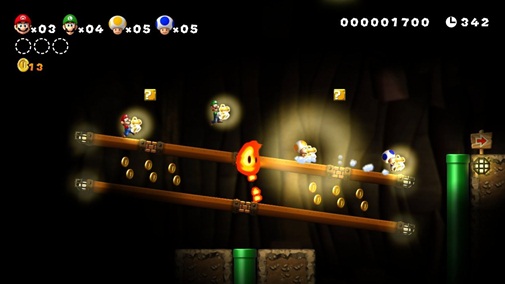 Aside from these, the only main and Wii U specific change is the game’s integration with the MiiVerse. It must be said that, despite being a fairly obvious implementation, the way the service is integrated with the game is fantastic and something that more games could do with. On the world map (of which you now just have one large one as opposed to a separate map for each world) you can see various messages other players have posted on MiiVerse regarding each level. It might be a tip, a player asking for help or simply some lucky son of a gun bragging about how quickly they beat a level. You can leave your own messages to, with the game prompting you to do so if you fail a section too many times or clear a course in a spectacular manner. It’s clean, efficient and indicative of how Nintendo’s community features can be used in future titles.

The visuals are one element that need a greater depth of discussion, what with it being the first time Mario has graced a resolution higher than 480p. The mushroom kingdom translates remarkably well to the world of HD, but it’s hard to feel like you’re really getting your money’s worth with the graphics on show. The 2D element in conjunction with the conservative world and character designs prevent any real flourishes from occurring technically, and the fact that the animations, character models and almost all audio elements are seemingly lifted directly from previous games in the series really rams home that this is an update rather than a full sequel to the New Super Mario Bros. Sub-series. 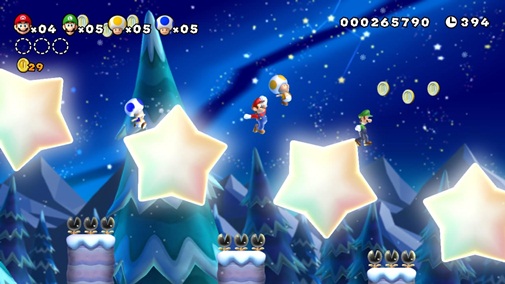 That is really the long and short of it sadly, and the reason why NSMB Wii U was such a frustrating title to review. If we were looking at fun factor alone, the game would need a score higher than this, as it’s hard to not have fun with a Mario game. To do this though wouldn’t be right, as making a Mario game fun is like breathing for Nintendo; it’s just one of these things that seems to come naturally. Granted, the levels are well crafted, the multiplayer is still fun and the difficulty hits a sweet spot, but the lack of any new features or material is a disappointment, and highlights a conservative treatment Nintendo has with all its franchises that threatens to render them all redundant as time and hardware marches on. For the consumer, I’d say not to bother at the full RRP if you have any of the other NSMB games, but if you’re a Mario nut like the rest of us then you’ll probably already have it, and you’ll likely be having a good time as well. It’s just a shame Nintendo couldn’t allow us this fun but with some actually interesting content as well.

Boost gameplay is dull, Limited controller support, Few new ideas, Not the best use of the Wii U's graphical power

Final Verdict:
GOOD
Mario returns in yet another 2D platforming romp. It's classic Mario all over, but Mario Bros. U fails to add anything meaningful over 2009's New Super Mario Bros. Wii.
A copy of this game was provided by Developer/Publisher/Distributor/PR Agency for review purposes. Click here to know more about our Reviews Policy.