We recently got in touch with Joonas Laakso, Producer at Bugbear Entertainment to talk about their latest project, Next Car Game. Bugbear Entertainment are the developers behind popular racing games like FlatOut, Sega Rally PSP and Ridge Racer Unbounded, so they are no strangers to the genre. We asked Joonas about the destruction engine, different modes, PS4 and Xbox development, modding and more in Next Car Game.

Read the full interview below.

Pramath Parijat: First off, we have to talk about the name. Why ‘Next Car Game?’

Joonas Laakso: All of our games are internally known as “NCG” for Next Car Game until they have a proper title. This time we just went public with it. It’s still a working title and likely to change at some point.

Pramath Parijat: So, the game obviously seems to place a lot of focus on vehicular destruction. As someone who loved playing Carmageddon, Destruction Derby, Burnout, and Twisted Metal, your damage model immediately caught my eye. Can you please describe your destruction engine in detail and how it compares to other engines in the industry such as FrostBite?

Joonas Laakso: The goal is that everything in the game world should feel like it has a reaction to you crashing a car against or through it. Some stuff you can go through and some things will stop you, but it should all feel like heavy hits in a believable, physical world. We’ve tried creating entirely destructible areas, and they are just no fun to race in.

Here we’re really focused on the car destruction, not the world so much. The cars “deform”, or become visually damaged and dented, according to a soft-body simulation, overlaid with “panels” (doors, hood, and so forth) that can be ripped off. What this means is that instead of “damage models” that you change on the fly depending on a car’s condition, what you get is actual simulation of the hits leaving marks on the cars exactly where they landed. We had an earlier version of this system in use in Ridge Racer Unbounded and Driftopia.

"There’s going to be racing and derbies and both will have both survival and respawn variants. Likely also elimination, timed laps, that sort of thing. We’re still thinking about how the car building is going to work online – cheating is a concern."

Pramath Parijat: Congratulations on your recent Steam Greenlight! Now, this game is unique in that it is completely crowd funded- everything, from it getting on Steam to the actual game development process, seems to be the developers engaging with the fans and the community. When did the idea to go that route come about?

Joonas Laakso: We’ve wanted to do that for years, but working with publishers it’s difficult. There are so many people involved that you can’t just go off and do your own thing. Now we’re in control of everything and want to be really transparent and open. We feel like we had a great thing going with FlatOut but since publisher went bankrupt, we lost that audience. Now in the social media age we want to reclaim, re-build and renew that core group of fans. We’re making this game with them, for them. We’re seeing it more as developing a community of fans than releasing a single game. These days a dedicated group of fans online can support you better than a potential, but detached audience of millions ever could.

Rashid Sayed: You guys are making sure that atleast the basic version of the game will be released. How many tracks and vehicles will it have?

Joonas Laakso: We don’t know yet. It’s going to be enough. We started designing from the idea that even with a single car and track there should be enough to do here to last for a long time; that’s where all the car building comes into.

Rashid Sayed:  Can you please let us know about the multiplayer component of the game? What kind of modes can players expect?

Joonas Laakso: There’s going to be racing and derbies and both will have both survival and respawn variants. Likely also elimination, timed laps, that sort of thing. We’re still thinking about how the car building is going to work online – cheating is a concern. 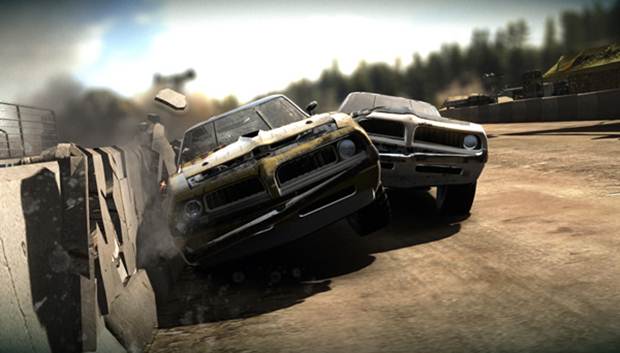 "There’s still a relatively large cost associated with any new versions, about two months of work at a minimum. Some of the work and costs just can’t be helped – for example the QA is probably just as expensive as ever, as well as all the per-platform requirements to do with their user experience: Achievements, Trophies, and the like."

Pramath Parijat: You obviously have big plans for the game. Will these plans be totally dependent on what your community wants or are you thinking some ideas of your own as well? Please share!

Joonas Laakso: We know what we’re doing and so far what the fans are saying is pretty well aligned with us. There are some details which seem to get more support than we anticipated – for example LAN play and a PS4 version. We are keeping our ears open to react to any strong opinions among the fans.

Rashid Sayed: Next Car Game is only on PC for now but there are plans to bring it on the PS4 and Xbox One provided there is enough funding. I have a question regarding this. Ever since Microsoft and Sony revealed their next generation consoles there has been a notion that development will be easier on them resulting into lesser time investment and more output. Since next gen consoles have similar architectures to a PC, will the costing and time invested be less to port the ‘Next Car Game’ over?

Joonas Laakso: Yes, it looks like it will be cheaper. There’s still a relatively large cost associated with any new versions, about two months of work at a minimum. Some of the work and costs just can’t be helped – for example the QA is probably just as expensive as ever, as well as all the per-platform requirements to do with their user experience: Achievements, Trophies, and the like.

Rashid Sayed: From a development perspective, what are your thoughts on the PS4’s 8GB GDDR5 RAM and unified architecture? Do you think GDDR5, although faster will have latency issues?

Joonas Laakso: We’re developing for mainstream PC hardware, so some 2-3 years behind the curve right now. We are mostly interested in scalability. We have a lot of fans who are telling us to keep it light, and we’re doing our best to comply. There is going to be room to flex your big power PC’s muscles, too, don’t worry – our emphasis on physics uses up pretty much all processing power it can get its hands on. Sorry for giving a more technical answer than that! 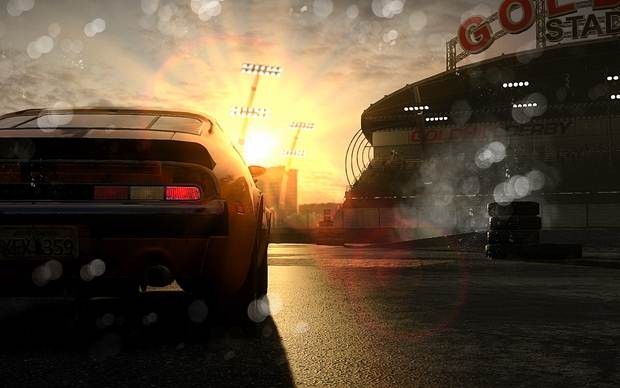 "On the whole I expect all manner of hardware to keep converging and in the not so distant future, the whole notion of hardware will become irrelevant. Nobody will care anymore, it’s just games and screens and experiences."

Rashid Sayed: What are your thoughts on the Xbox One’s cloud system? I believe cloud will be ideal for a game such as yours. You can patch or bring in new updates on the fly using the cloud, something which Forza 5 plans to do.

Joonas Laakso: Some sort of cloud streaming is definitely in the future. We have no concrete plans for it yet, though.

Rashid Sayed: Recently, Nvidia stated that it is “No longer possible” for consoles to have better graphics than PC. Now as someone who is working on PC and have a vast experience working on consoles, do you think this notion holds true for next gen consoles? [article reference]

Joonas Laakso: I don’t know if that’s a very relevant thing to say. I expect our PC and possible (likely) Xbox One and PS4 versions to look very near identical. For me personally, graphics have long since passed the point where I really care anymore; most of them look so nice that I don’t need anything better. Take something like Dishonored: it won’t get substantially better by increasing lighting effects or resolution or particles, let alone polygons. It’s more about interesting, unique takes in an artistic sense than just pushing more bits. On the whole I expect all manner of hardware to keep converging and in the not so distant future, the whole notion of hardware will become irrelevant. Nobody will care anymore, it’s just games and screens and experiences.

Pramath Parijat: So the destruction and mayhem in this game is insane. Do you all hate cars that much?

Joonas Laakso: We really love crashing cars and destruction in general. I guess it’s a boys’ thing, finding that joy in smashing things, being a little malevolent about it. It’s much more fun to smash the other guy aside than just cleanly overtake him. But it’s true that we build our cars in order to crash them. 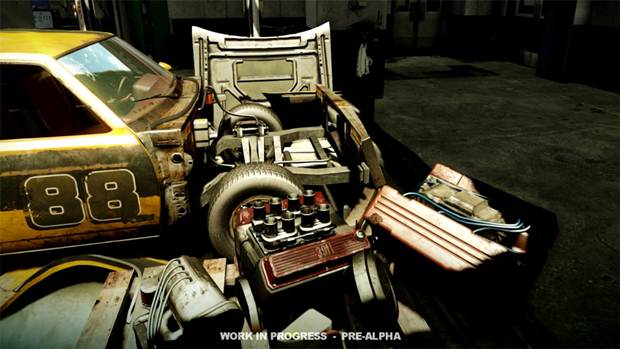 "We have decided to support modding as we recognize it’s a large part of why FlatOut is still known and played today. How exactly that’s going to work we don’t know yet, but the goal is to have user-created tracks and cars available, though Steam Workshop or otherwise."

Pramath Parijat: Now this is a car game with a difference, considering all the focus there is on wrecking stuff. When was the decision to go this direction with this made?

Joonas Laakso: It’s been in our DNA since the first FlatOut – you could say from the beginning, really, because it’s still all based on our proprietary physics engine, which dates back all the way to Rally Trophy (2001). Physics simulation equals building and demolishing things, and that’s what we’ve been doing. We’ve thought about going in another direction, but there’s no sense in that, because this is what we’re good at.

Pramath Parijat: A game like this obviously opens itself up to user generated content. It being on Steam should be a great help in this regard, considering the Steam Workshop, and such. Do you have any plans to promote user created mods and all?

Joonas Laakso: We have decided to support modding as we recognize it’s a large part of why FlatOut is still known and played today. How exactly that’s going to work we don’t know yet, but the goal is to have user-created tracks and cars available, though Steam Workshop or otherwise. We’re likely not going to ship actual editors, but rather tools you can use to export models into the game.

Pramath Parijat: What does your studio plan on doing after this game?

Joonas Laakso: Ideally we’ll see Next Car Game develop a healthy community which we will then keep building on. Then there’s two other games related to NCG that we’re going to unveil soon, as well as a much bigger PC project that’s still in early stages. Where NCG is a long overdue return to our roots, the new big thing is a passion project we’ve wanted to do for years and years. More on that some time next year!