Next Island Could Become The Next Best MMO

Some of you might be saying, “What the hell is Next Island?”.  Next Island is an MMO created by David Post that is built on a real economy system that is also free to play with no subscription fees or anything like that which has been being played for years by friends, testers and staff to perfect it.  The bases of Next Island is not just its real economy system which was surprisingly well placed, but rather the capability of its growth.  It has almost been an underground game for sometime now, not breaking into the mainstream media, but that has only left much time and room for perfecting the system that Next Island works on.  The game mainly differs from ‘World of Warcraft’ and ‘Second Life’ because it’s the first massive multiplayer online game driven by a real cash economy as well as leaving so much room for expansion. For instance swimming in the game can be serene and fun but eventually the team spoke about eventually maybe adding scuba gear which would require a scuba gear shop, that has to be run by some one as well as take part in the real time economy.  We were invited to get a sneak peak as well as an explanation of the games aspects watching gameplay in the videos below.

Next Island takes place in present day but is science fiction based so to gain money you can do things such go hunting from anything from a wild boar to a fire breathing dragon all which require the right tools and skill set. If you are wondering about the money system it is broken down into 10 PED (Project Entropia Dollars) is equal to $1.00 (One US Dollar). When it comes to building an income, it is widely based on how it works in the real world. Go to work everyday doing a profession, master that profession, go hunting, ‘raid’ a massive enemy with friends for loot that can be sold, traded or used all tying into the real time economy system. Hell be a hairdresser if you want or you can craft weapons to use, sell or trade. You of course get to create your avatar to make him/her the way you want giving the game even more customization. Once you create your avatar… well.. your a newb 🙂 But beyond that you are dropped into a main area of Next Island where you can socialize with other place, where ‘Club Neverdie’ can be found, browse other shops and from there you can start getting down to business or create your own house that is customizable and hell why not even have parties in with your friends.

They are dubbing this a ‘Virtual World’ which is really just another way of saying MMO, but the reason it is being dubbed that term is that you can doing anything you want in the game that you can think of. If you can’t do something that fancy’s your taste, odds are it will be added to the game as it is constantly being updated with new things and aspects all the time. Of course you must keep in mind that Neverdie Studious and developers MindArk make sure that everything is balanced and that there is no way to exploit things with the biggest things being money. Even with the addition to Time Travel in the game, you can still not find ways to get rich by exploiting the games mechanics. There are even events that can be created by players that may require an entry fee and the winner of the event takes home the grand pot while user that created the event takes home the rest of the entry fees minus the grand pot. These events can range from literally anything in the game; get the highest hit point on an animal being hunted to defeating certain enemies.

You can even have vehicles in the game. To create a vehicle you will need the blueprints and the right skills to do so. Carrying a vehicle around is not so practical as they don’t have the weight of a feather and your inventory is based on weight, much like the Fallout games. Vehicles are not only used for travel and a way to transport heavy items but there are actually placed in the world that are only accessible by lets say a flying vehicle like a helicopter. As mentioned before you will be able to Time Travel to places like Ancient Greece and weapons that you create in modern day cannot be used when Time Traveling back in time so you can annihilate everyone with your super awesome gun. No you will have to craft, buy trade items in that specific time era.

Next Island is roughly based as a planetary system with Next Island being a planet itself, to mention Planet Calypso. The game is deeply unique in its real based economic system and literally leaves the player with endless ways to make money, even if it’s charging another player a ride in your newly crafted helicopter to get to an otherwise in accessible area. Plus there is nothing like wielding a $10,000 weapon to annihilate enemies and help you gain even more money as you play. Make some money and want to cash out and never play the game again, no problem as Entropia Universe is real bank based in Sweden. John ‘Neverdie’ Jacobs became famous in 2005 because he mortgaged his house and spent $100,000 in real money on a virtual asteroid in the Entropia Universe.  John now works for Neverdie Studios.  Hell, you could make a decent living in the world of Next Island.

Next Island is now currently available to play for free.  Just visit their site http://www.nextisland.com to download the client and you off and ready to go.  Just make sure your system requirements are as follows. 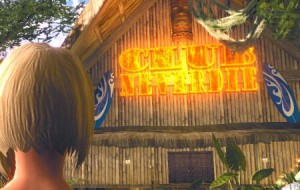 The game was stressed by the team that it can be played by the casual gamer and the hardcores gamers.  You could get lucky and kill a skeleton that drops $10,000, drop a mine detecting valuables, netting you 30 grand or really take advantage of the economic system that gives you the tools you need to do so where living in real world might not.  Players gaining high amounts of money or loot and where/how they attained it, can be shown on screen as an option.  There is also an iOS text based game the is a prequel to Next Island. Details are as followed.

The backstory of Next Island on your iPhone or iPad

Next Island: Origins is a new casual game for the iPad and iPhone, set in the 1980s, with nods to classic text-based adventure gaming.

This science fiction story reveals some of the backstory behind the virtual world Next Island, but is a complete, standalone game. Origins introduces Elysium and introduces some of the characters and events that shape the Next Island universe.