Posted By Will Borger | On 13th, Sep. 2017 Under Article, Reviews | Follow This Author @will_borger

The last few months have been pretty surreal for me, as a hockey fan. Here were my Penguins, fresh off of winning the Stanley Cup last year, with a chance to do it again. I know, I know, I’m spoiled; I can practically feel the rage of Capitals, Senators, and Predators fans from here. And that’s not even touching the sadness of Maple Leafs fans. Chin up, guys. It’ll happen for you soon. But playoff hockey was my refuge. I was going through a number of personal struggles at the time, the least of which was being laid off from a job I loved because the company in question was having funding issues.

The playoffs gave me something to look forward to. I was broke and miserable, but my Penguins had a shot at the Stanley Cup. More than that, they had a chance at back-to-back wins, something no team had done in nearly twenty years and no team had done since the NHL introduced its salary cap. I was in a rough spot, but as long as it was time for playoff hockey, it was a good day. Every game was exciting, every win exhilarating, and every loss heartbreaking. In the end, they ran the gauntlet. They won. I got to watch my favorite player (Marc-Andre Fleury, for those interested) lift the Cup for the last time as a Penguin, something that wouldn’t have been possible without him. I got to experience that when I needed it most.

The Penguins got me through those months. That’s the power of sports: the ability to be a part of something bigger than yourself, to share hope and heartbreak, loss and joy, with people across the country and the world. Hockey gave that to me when I most needed it. Needless to say, when a copy of NHL 18 slid across my digital desk, I was excited, but a little nervous, too. After all, I was the poor guy who’d had to review NHL 15. 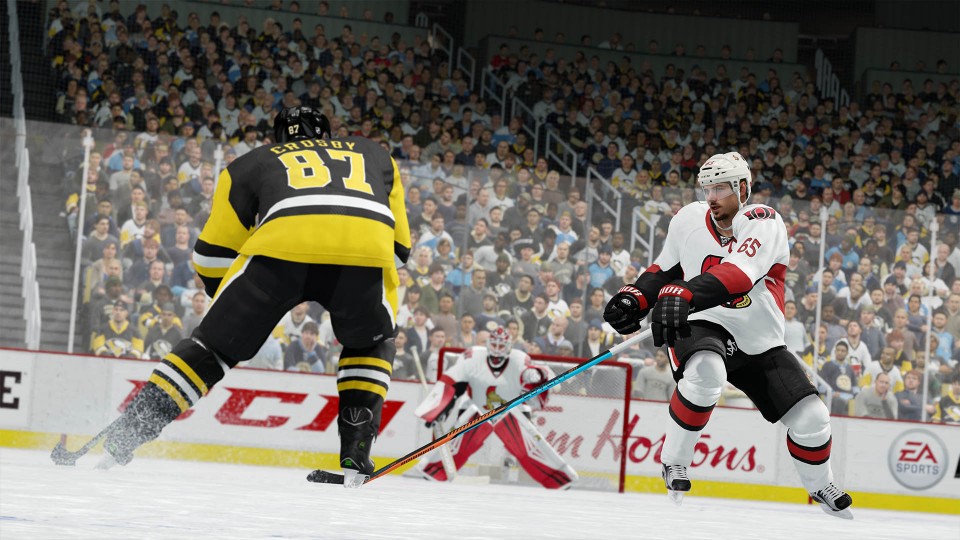 "NHL 18 impresses from the jump. The first thing you’ll notice is the game’s slick interface. The menu is laid out like the apps on your phone as a series of squares."

I shouldn’t have worried. NHL 18 impresses from the jump. The first thing you’ll notice is the game’s slick interface. The menu is laid out like the apps on your phone as a series of squares. Pushing down on the analog stick from the main menu bring you to the menu, which is well laid out and easy to use. You can even pin your three favorite modes to the main menu for easy navigating.

The real excitement is in what’s new. Franchise mode has received a face-lift, allowing you to play as the Vegas Golden Knights or start the NHL’s 32nd franchise. The customization options here aren’t spectacular, but they are good enough that you should be able to create a team that feels distinctly your own. You can now request a trade in Be A Pro. EA Sports Hockey League and Hockey Ultimate Team return, the latter with the welcome new ability to complete individual challenges that reward resources for upgrading your team. 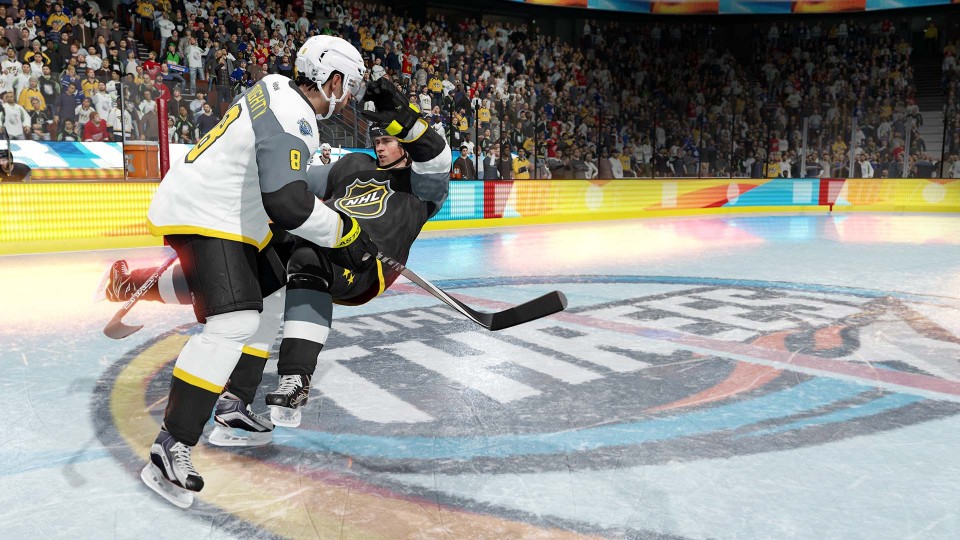 "These are all excellent upgrades, but by far the best is the introduction of new teaching tools. Playing a sports game is a lot like playing a fighter. You have to know what you can do and how to do it, and the whole thing can be a bit intimidating to new players."

These are all excellent upgrades, but by far the best is the introduction of new teaching tools. Playing a sports game is a lot like playing a fighter. You have to know what you can do and how to do it, and the whole thing can be a bit intimidating to new players. NHL 18’s solution to this is a mode called Training Camp, which is presented by Hockey Canada. Camp features detailed tutorials on passing, shooting, playing defense, faceoffs, and basic and advanced deking. The tutorials will show you simple videos demonstrating the techniques, and then ask you to do them yourself. It even features videos that explain offsides rules and techniques like dumping the puck.

The problem is that it doesn’t go far enough. It doesn’t teach you, for instance, how to fight, or how to play goalie. There’s a practice mode for the latter, but this is a game with a pretty complex control scheme and given that other EA Sports titles, like Madden, will essentially walk you through every aspect of the game, NHL 18’s learning tools feel a little sparse, even if they do an admirable job of teaching you the basics.

The biggest new mode is NHL Threes, which is a 3-on-3 game mode that is more arcade focused and takes place on a smaller rink. In terms of feel, it’s like a cross between the NHL and professional wrestling, a comparison which is only aided by the announcer, who can politely be described as “obnoxious.” The mode itself is pretty fun, though, and things like money pucks, which are worth twice as many points as a regular puck, keep things interesting. It’s also available as a mode in Hockey Ultimate Team and EASHL. It’s a good mini-game overall, and great if you have friends over for couch co-op. 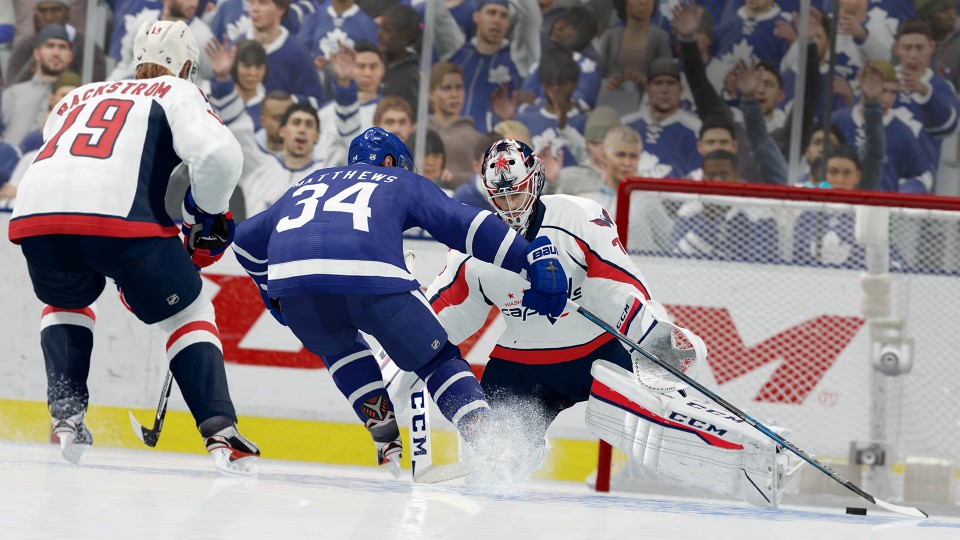 "The presentation here is impressive. Player likenesses are recreated in stunning detail, and the animations are smooth and believable."

In fact, playing co-op in NHL 18 is remarkably easy. Pretty much every mode supports some kind of multiplayer, and you can play almost all of them locally. In an age where local multiplayer looks like it has about as much of a future as cassette tapes, it’s nice to remember that local multiplayer is what brought most of us into video games in the first place.

Whatever you pick, things have never looked or sounded better on the ice. The presentation here is impressive. Player likenesses are recreated in stunning detail, and the animations are smooth and believable. Crowds are similarly detailed, and the NHL franchise remains one of the few where the crowds feel more than an afterthought, even if you’ll see the same fans a lot and there is some weird crowd clipping going on.

The sound design is also excellent. Big hits sound loud and painful, and slapshots feel powerful. The one issue here is the commentary. Mike Emerick and Ed Olczyk sound great, but the commentary feels very general, often referring to “they,” “this player,” or “this team,” and it won’t take long before you realize just how canned everything is. 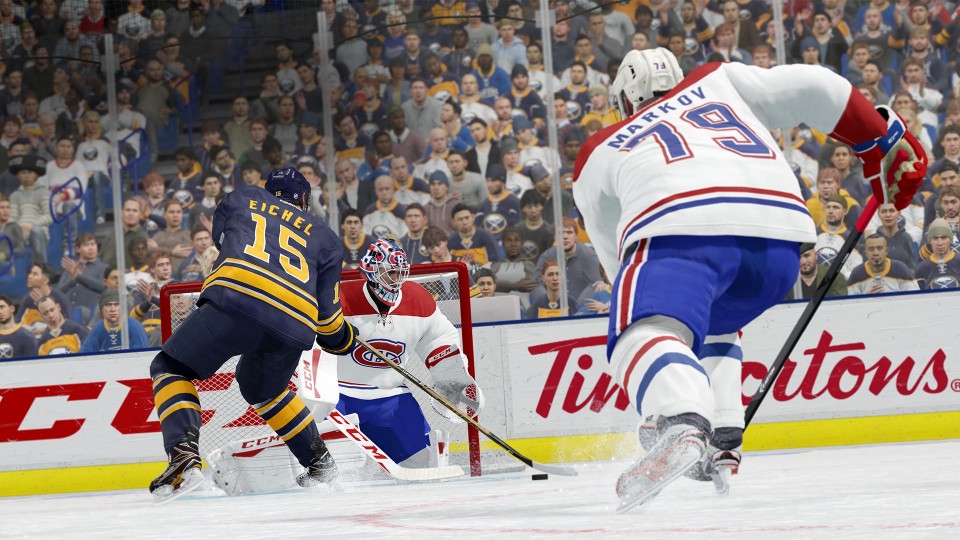 " NHL 18 is mechanically sublime. The skating, which has long been a series strength, is exhilarating, and the precision is that of a practiced magician."

These presentation issues don’t carry over to the gameplay. NHL 18 is mechanically sublime. The skating, which has long been a series strength, is exhilarating, and the precision is that of a practiced magician. If you get beat by another skater, it’s always because you did something wrong. It’s like you’re on the ice yourself, and that feeling of precision is rare in sports game.

NHL 18 introduces a number of new refinements on offense and defense, too. The new deke system is easy to use and well-animated, and the new defensive skill stick system offers its match on the other side of the puck. These systems feel balanced against one another, allowing the player options while respecting individual player skill. They don’t respond well to spamming. Misuse of the former will lose you the puck, while overindulgence in the latter will lead to a mound of penalties.

No matter how you spend your time, playing NHL 18 simply feels right. There’s a level of precision and skates on the ice feels natural, and the new updates are, universally, good decisions that add something to the game. Of course, there’s still improvements to be made. The commentary needs to be updated, and Be A Pro still feels generic, especially after modes like Longshot in Madden 18 and The Journey in FIFA. But these are minor qualms in a game that feels this good and has this much to do. It’s something they can fix next year. Right now, hockey’s back and month early. And that’s more than enough for me.

Commentary is generic and bland. Be A Pro lacks any kind of narrative. Crowds could use a bit more polish. Teaching tools could still be improved.

NHL 18 impresses with new teaching tools, sublime skating, updated dekes and defensive moves, new modes, and a lot of improvements. It isn't a perfect hockey game, but when it skates this well and looks this sharp, who cares?

A copy of this game was provided by developer/publisher for review purposes. Click here to know more about our Reviews Policy.
Tagged With: EA Sports, nhl 18, ps4, Xbox One