Nights of Azure 2: Bride of the New Moon Review – A Perfectly Competent Game In What It Wants To Do

A hard night’s work for a knight.

Nights of Azure 2: Bride of the New Moon imagines a fantastical world of knights, priestesses and fiends, and a world of night under the rule of a fierce Moon Queen. If this sounds like a good setup for an action RPG, you’d be right. But it’s not exactly a new story, rather an amalgamation of many familiar elements. It’s almost poetic then that the rest of the game mirrors that sentiment, familiar but just engaging enough to be something worthwhile for the right audience.

Aluche is a respected knight for the Curia, an order dedicated to fighting against the Fiend hordes, humans transformed into monsters by the blue blood of a Demon lord, and keeping humanity safe. After she is tasked with a mission to escort her childhood friend and priestess Liliana to the Moon Queen to be offered as a scarifice, Aluche is torn on following her duties and protecting her friend.

But the twist comes when the Moon Queen catches up to them far too quickly, and in the ensuing battle, Aluche is pierced through the heart. An unspecified amount of time later, she is revived as an artificial half-demon, finds Liliana is missing and the world has been plunged into an eternal night. The clock is now ticking on the fate of everything, and the newly empowered Aluche and her party need to locate Liliana and prevent the end. 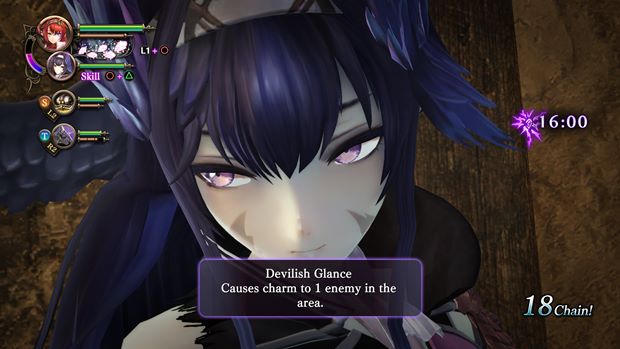 "The blue blood that now courses through her veins grants a massive blood sword Aluche can summon from the ether, which facilitates the huge combos the game loves to dazzle with and recalls the bombastic combo system of the Warriors games."

The blue blood that now courses through her veins grants a massive blood sword Aluche can summon from the ether, which facilitates the huge combos the game loves to dazzle with and recalls the bombastic combo system of the Warriors games. Aluche brings backup however with her Lilies, partner characters that fight alongside her. Each of the girls who joins your party has their own quirks and their own benefits to how they back you up.

One is a magic hurling ranged attacker, another could be a straight up bruiser with a huge sword, yet another is more of a ranged healer. There’s lots of variety in how you build your team in the game to attack different situations. As Aluche fights with her different Lillies, they’ll grow closer together in bond as well, unlocking new abilities and helping them fight together more efficiently. In addition to the Lillies, creatures known as Servans either come to you or get captured and provide useful secondary abilities you can trigger at a moment’s notice, such as a flamethrower.

You are limited by the phases of the moon to hit thresholds within the game, meaning you need to balance time pursuing in main and side missions night by night, to make sure you’re getting done everything you need. Sometimes even a simple fetch quest can earn you some much needed gold, and blood which works as experience points, or you’ve finally done enough grinding and can take on the big bad. Levelling up unlocks new and flashier combos slowly, helping keep players engaged. 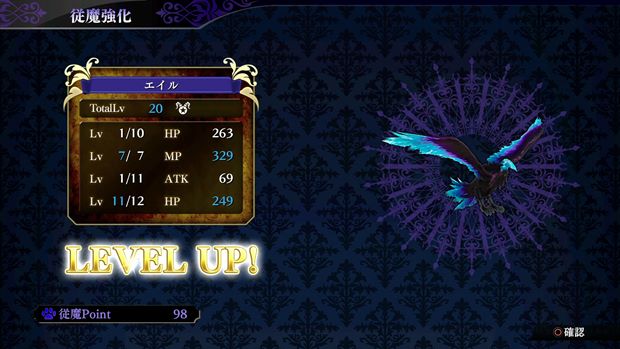 "Wolf-like, bird-like, completely monstrous or completely gorgeous, you’re going to be giving the square button a workout with little room for player expression."

While the maps are rather more open and slightly more explorative than a Bayonetta game, the idea is the same with the kind of features you would expect. The combo system borrows more from Musuo games with rapid light attacks with heavy finishers to change it up, but a lock on, magic attacks and tension attacks with your lillies, dictating strategy to your lillies and modifiers like holding a button to charge or for a powerful blood attack all help keep engagement within the reasonably smaller confines.

Azure could have had the benefits of allowing itself tighter encounter design for the smaller engagements, but for the most part doesn’t do much with this freedom because of a lacking diversity in the fiends and how the player can approach them. Wolf-like, bird-like, completely monstrous or completely gorgeous, you’re going to be giving the square button a workout with little room for player expression. The new combos that unlock as you level up and the new Servans you recruit are what keep things fresh. 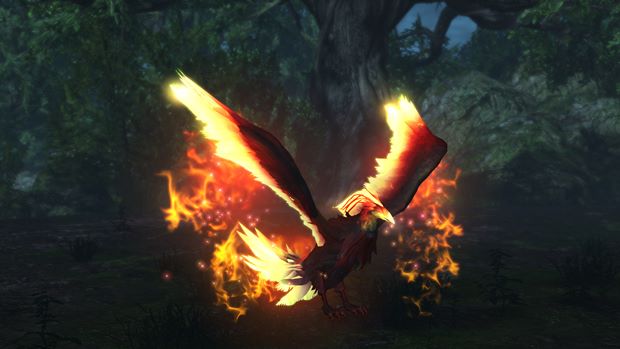 "Nights of Azure 2: Bride of the New Moon doesn’t have any particularly major stumbling points, and it’s a perfectly competent game in what it wants to do."

Nights of Azure 2 can lean dangerously close to the line between the typically expected fan service moments in these games, and just uncomfortable pandering. Moment to moment it doesn’t harm the action when you’re in it, but you might be inclined to shut the door when you play.

Accompanying the game is an OST that isn’t anything too standout, but fairly diverse for when it needs to be. Calm, soothing lobby music defines the safety of the hotel you keep your base at, and pounding beats with shredding guitars for the action and tenser string instruments for specific moments. It’s nothing you would have on an iPod, and that same “good enough” aesthetic flows through to the visual design too. Azure paints a striking picture of night through the art design and use of colours, and the cel shading helps hide what are otherwise basic looking models and textures to keep you from thinking too deeply about the fact the game doesn’t look that good or bad. Sound design too could have done with some more crunch to it, as the combat feels like it could be more impactful with some better sound effects.

Nights of Azure 2: Bride of the New Moon doesn’t have any particularly major stumbling points, and it’s a perfectly competent game in what it wants to do. Solid art design helps ground the world while using relatively basic models and they add just enough wrinkles to the main focus, the combat, to keep it from getting to repetitive. That might also be the biggest sticking point in Azure as well, it’s not really making a case for being a must play in the genre. Action and RPG fans should have a great time, but after they’ve exhausted all the other great titles this year.

Great art design helps mask less refined elements. Battle systems are just tight enough to keep you interested, the story is serviceable if nothing new. RPG systems and Avatar growth keep injecting the game with new elements just when it would get old.

Distracting objectification goes past fan service into plain uncomfortable. No element particularly makes the game stand out among its contemporaries in the genre.

As a fan of the action RPG genre, Nights of Azure 2: Bride of the New Moon should be everything you’ve been craving after devouring the other great titles this year, but that’s probably the worst knock on the game as well, it does little to make itself stand out and call it a game you must play, or even should probably try eventually.

A copy of this game was provided by developer/publisher for review purposes. Click here to know more about our Reviews Policy.
Tagged With: Gust, Koei-Tecmo, Nights of Azure 2: Bride of the New Moon, ps4