If we have proven anything through video games, it is that the concept of one man killing thousands of people at once is always fun. The newest addition to the “Kill Everything All The Time”, or the Hack and Slash genre is Ninety-Nine Nights 2, or simply N3II.

The main objective of a Hack and Slash game is to kill the swarms of enemies filling up the screen, and as is expected, N3II handles this nicely. The game crams enemies from wall to wall for you to fight against, and gives you the opportunity to send dozens of them flying with melee and magical attacks. But as soon as you feel like you are slicing through butter with a warm knife, more powerful enemies are strategically placed to up the challenge. It takes a lot of willpower to not just start flailing at a large rock throwing ogre after seeing how successful that tactic proved on the now deceased horde of fodder. 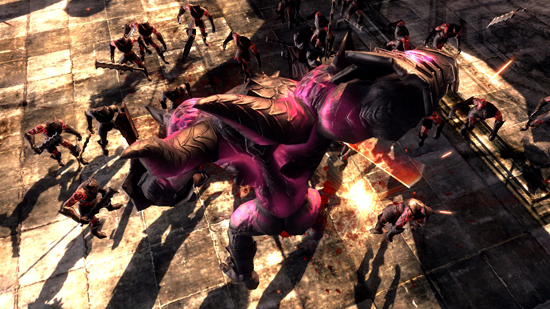 Watch out for the big guy

So you may be thinking, I’ve played this type of a game before, whats new? Well a few things. First up is the 5 different playable characters, each with different weapon load outs and specialties. Next we have the customizable weapons and magical spells. 4 spells can be equipped at a time, and have varying effects. By holding the left bumper and pressing a face button, you can launch into a large sweeping attack, massive thrust, or a 360 degree blast. All of these magical techniques prove extremely useful when you start feeling overwhelmed.

Surprisingly enough, there are also going to be puzzle and platforming elements. I am eager to see how this truly plays out in the retail version of the game, because I keep asking myself if the break from insane combat will be refreshing or irritating.

Now for the big one, Two Player Online Coop. In N3II you will have to chance to link up with a friend online and play through special Coop missions, as well as a Survival Mode where you fight endless waves of bad guys, all with online leaderboards. All I know is that from playing hours upon hours of Gauntlet: Legends, its always more fun to go in with a friend. 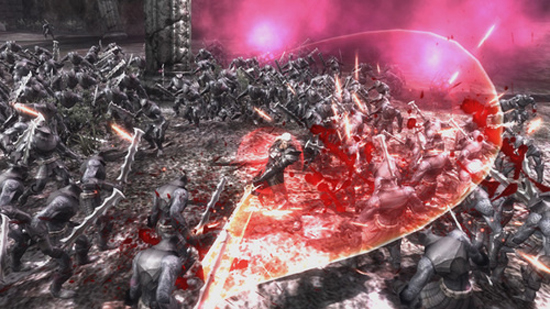 There are plenty of people to kill

The presentation of the game itself isn’t remarkably stunning. The graphics do little in trying to make you stare in awe, the enemies are seemingly bland, but this is balanced by the fact that there are so many of them. Time spent detailing the lesser monsters would have been completely wasted by how clumped together they get. I am not saying by any means that the game looks bad, it lives up to the standard to how current gen game should look and feel.

All in all if you are a big fan of the Hack and Slash genre, or have ever had some hours of fun playing a game like Dynasty Warriors, N3II will not disappoint. If you have never tried the Hack and Slash genre, or consider yourself too hardcore to play something so “mindless”, swallow your pride and give it a shot. I don’t know a single gamer who doesn’t enjoy these games, even if just for a short amount of time. The Release Date is set at June 29th, which is a day that is piling up with new releases.