From Software, creators of the Armored Core series have taken things in a new direction. Now instead of big robots fighting for even bigger corporations we get to play as a modern day ninja…no I’m not kidding. Ninja Blade is an obvious attempt to steal some of the fans of Ninja Gaiden, and while for the most part it can be very fun, too many things can ruin the entire experience if you are not patient enough to over look them.

In Ninja Blade you play as Ken, a modern day ninja. You can tell by the name that this game defiantly doesn’t take anything seriously, what kind of ninja name is Ken? You are attempting to save Tokyo from an infection of things called Alpha Worms. They infect people and helicopters and pretty much anything else you throw at them. It is up to you to use your special blood to kill them at the source and save the city. Sounds kind of cool right? In all honesty the story is very weak and is just a level by level push to the end. 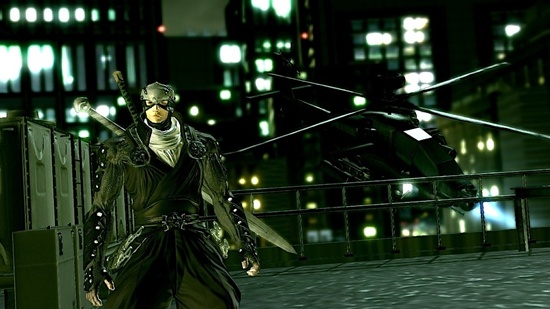 Look at that sense of smug satisfaction, he must be an American Ninja.

Now what is a ninja without his arsenal? You get all the clichéd weapons, an all around sword, a heavy sword, and fast attacking swords as well as a shrunken. One cool thing is that all the weapons have a secondary purpose. For example, the small fast swords can be used for certain grapple sequences to move from one building to another. These sequences unfortunately seem forced and repetitive. Now that we have the weapons we need the moves. Ken can run along and up walls, and use ninja vision. Ninja vision will reveal an enemies weakness and slow down time while in use, however you take double the damage when you use it. The wall running is used well and, other than the tutorial level, doesn’t feel forced.

Throughout the game you will fight the infected. They are very easy to beat being that each enemy has an obvious weakness, and even when they don’t you can just pull out your big sword and break them. Most levels are broken down the same way. You start with the mini boss, half way through you finally fight and kill it then you complete the rest of the level to fight the main boss. Nothing special but it keeps the pacing going. There is always something to kill around the corner. Speaking of killing, as you kill enemies in the game they will drop blood crystals. These blood crystals can be used in the very simple to use upgrading system. Simply gather enough crystals to upgrade one of your weapons and hold right on the joystick to fill the bar. Voila, upgraded. Each upgrade gives the weapon more power and gives swords new combos to use, but most of time you will just button mash to get your way through. 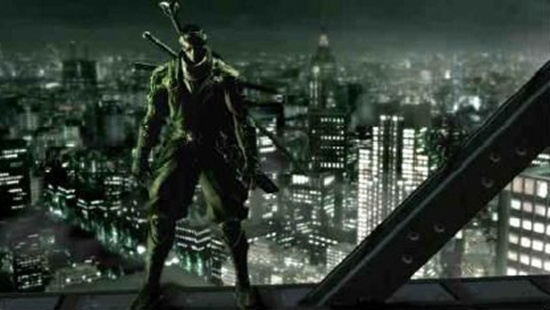 The graphics are good enough. They aren’t the best but with all the high speed ninja running and jumping you won’t be taking much time to look around. There is also the fact that you will be spending most of your time watching quick time events anyway. Sound is also good, the voice acting isn’t terrible and most sound effects are good. The music is alright, but you won’t be paying much attention to it.

The only other gripes with the game have to do with clichés, like the “all the bosses I defeated in the game gauntlet”, where you fight all the bosses again only stronger. There are also some glitches that will most likely be fixed in patches. I actually suffered one in my first play through. I reached the end of a crumbling hallway and a quick time event never got triggered. I was frustrated that I had to start the entire level again for it to trigger.

Ninja Blade can deliver some epic moments and some moderate thrills, but minor glitches, a lot of clichés, and way too many quick time events make this game derivative and annoying. If you really like ninjas that much, buy it. If you’re not sure, rent it, if you hate ninjas, Ken definitely won’t change your mind, and if you’re a pirate fan… maybe they’ll make Pirate Blade?

Final Verdict:
FAIR
Ninja Blade is a decent attempt at stealing Ninja Gaiden’s thunder, but falls short on everything it tries to do.
A copy of this game was provided by Developer/Publisher/Distributor/PR Agency for review purposes. Click here to know more about our Reviews Policy.