Nintendo Switch Could End Up Selling As Much As The Wii, Nintendo Suggests

Don't you know it's time to raise our sales?

The Nintendo Switch is an undisputed success at this point in time, having sold almost 7.5 million units worldwide already, in just six months, and projected to be at 16.74 million units sold by the end of March 2018- outselling the Wii U’s lifetime sales (and then some) in just a year of availability, and achieving more than half of the Xbox One’s last known lifetime sales.

Based on the trajectory of sales the platform has adopted so far, Nintendo suggests that the Switch may end up selling at levels similar to the original Wii, which went on to sell over 100 million units worldwide. Nintendo shared some graphs showing their extrapolation of data to reach this conclusion- as of right now, the Switch’s sales are slightly trailing the Wii’s at a similar moment in time, with the caveat that the Wii launched during holiday season, and had the benefit of the Holiday shopping frenzy, which the Switch has not yet had.

Assuming the Switch ends up selling as much as Nintendo projects it to this Holiday, the Switch will actually be outpacing the Wii- which will make it, officially, the fastest selling console of all time (which is absolutely insane).

Do you think the Switch will end up selling Wii levels in the long run, or do you think that is too optimistic a target? Let us know in the comment sections below. 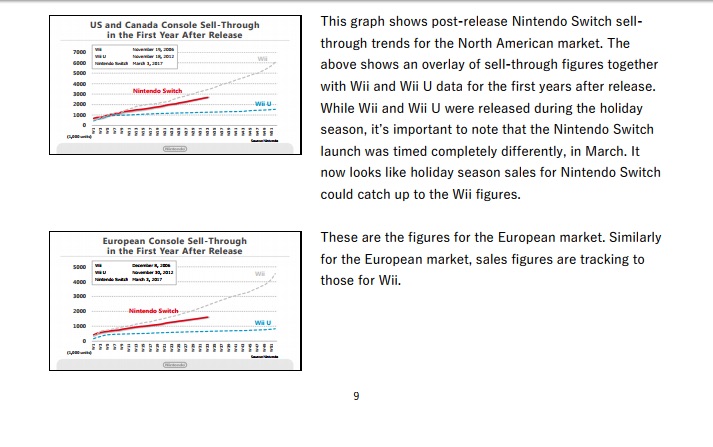