Our comprehensive benchmark of the PS4 and PC versions of No Man’s Sky.

Sean Murray and the the little Guildford-based team over at Hello Games made a pretty remarkable game. No Man’s Sky is nothing, if not remarkable. It might not amount to everything people made it out to be, but it really is a gaming experience unlike any other you’ll have.

Hello Games delayed the PC release by three days compared to the game’s PlayStation 4 launch. While that does give us a bit of an urge to put on a tinfoil hat and scream “Timed exclusive!” the truth is that Hello Games is a  very small team, and they were literally working up till the last moment to take care of the game’s PC version. They seemed to have missed a few spots because lots of people started talking about atrocious performance on PC.

To be honest, we haven’t encountered anything remotely like that. On our 980 Ti testbed, No Man’s Sky hits an 83 FPS lock (yay monitor overclocking!) at 1080p. We also tested the game on our 4K TV and it hands in a very respectable framerate in the mid-40s. It runs about as well as just about any other eighth-gen multiplat we’ve tried. There do appear to be some broken features, however. SSAA 4X doesn’t seem to have a notable impact on performance, and delivers AA-coverage that looks suspiciously like FXAA, which tells us that a.) it probably is FXAA, and b.) Hello Games weren’t kidding about needing more time on the PC release. We’re not looking to nitpick here, though: At 1080p, we had a wonderfully smooth, maxed-out experience, and the game still remained eminently playable at 4K.

On the visual front, No Man’s Sky isn’t really much to write home about: The textures are also procedurally generated, and while they’re largely unique, they’re also fairly low-res and, well, downright ugly. Ground textures don’t feature the normal-mapping or POM we’ve come to expect, and are flat and annoyingly tiled. I kept getting the strange feeling that I was actually going through one of those horribly amateur Morrowind new worlds mods, something like the creatively named Morrowland. Geometry is likewise lacking, though again we’ll give it a free pass because most of it’s mixed and matched on the fly. No Man’s Sky isn’t exactly an appealing game close-up, and some pretty terrible pop-in makes it even worse-looking game from afar (especially when you’re just about to land.)

But the vistas and landscapes the game generates are often breathtaking, though of course, that largely depends on you planet you’re on. There’s a lovely planet we’ll just call Ugly Yellow World, with dark green clouds, ugly yellow ground, acid rain (according to the description), and large stretches of barren, ugly yellow vistas. The half hour I spent trekking across Ugly Yellow World mining scraps of Iridium (which turned out to be worthless), was one of the most depressing gaming experiences I’ve ever had. But there is something very oddly compelling about No Man’s Sky, which’ll have you going back to it a lot more than you’d like. 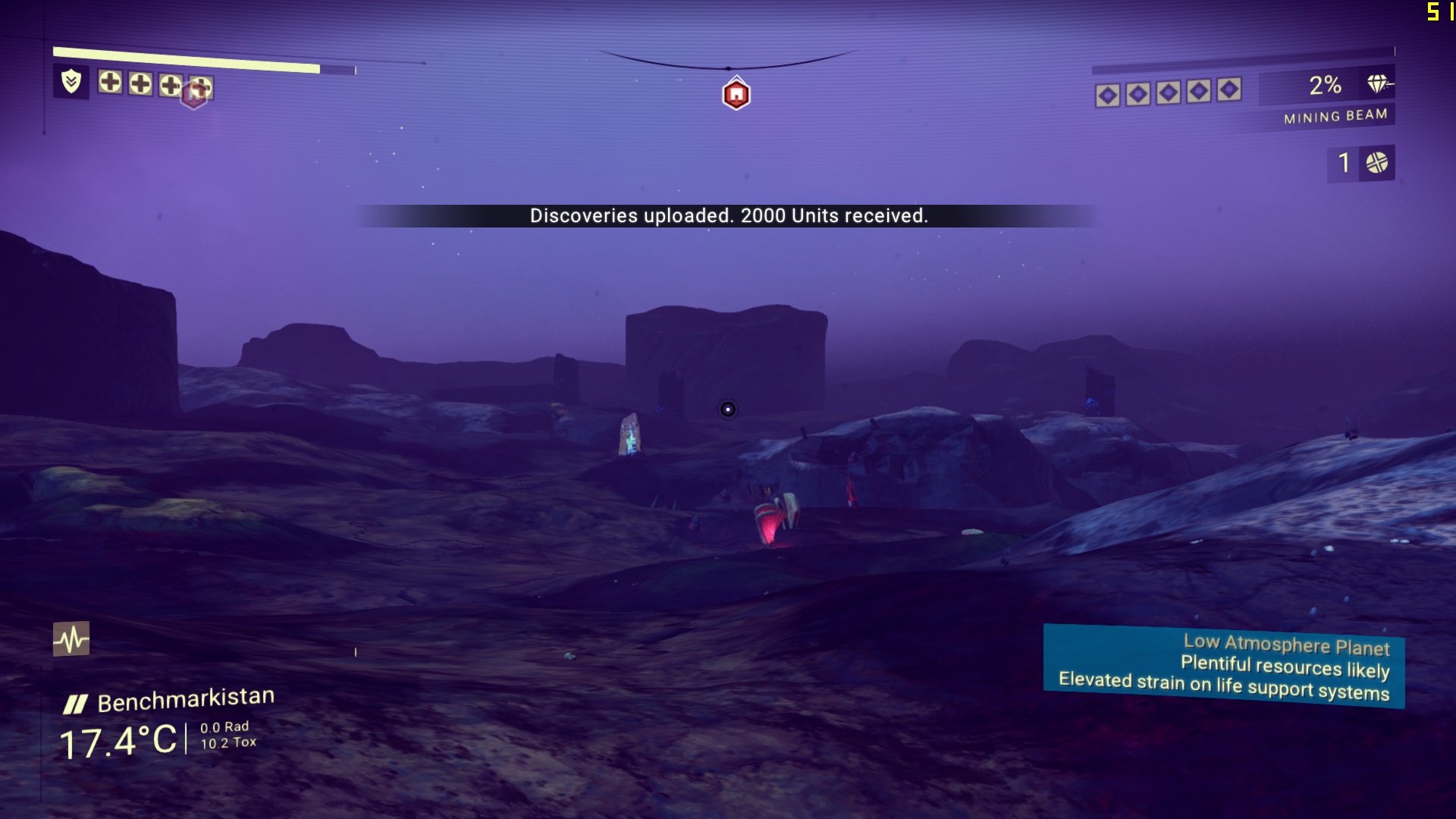 We evaluated No Man’s Sky on both a GTX 980 Ti and an RX 480 with a slight overclock to 1340 MHz. The former will give you an idea of how well the game runs (very) high-end hardware, while the latter will give you a good picture of what a more mainstream PC will be capable of outputting. We did multiple benchmarking and used FRAPS to record framerates before multi-run averages at each resolution.

Specs for our testbed are as follows:

We tested both cards at 1080p, 1440p, and 4K, with all graphics settings maxed out, apart from SSAA anti-aliasing (which wasn’t working anyways.) But before all of that, let us take a look at the PS4 version first.

The PS4 version runs at a native 1920 X 1080p resolution and targets a 30 fps cap. The game mostly runs at that target cap, however extreme drops are observed when the player’s ship enters the planet’s atmosphere and continues to hover around the planet’s surface. But as soon as you pull back, the frame rate appears to become stable. Further observations include the absolutely awful FOV, the terrible texture pop-in and generally low quality textures. The PS4 version appears to utilizing an FXAA solution and for the most part it does its job. Overall, the game looks just okay on the PS4 so don’t go expecting a Uncharted 4 and you will be fine.

Moving on to the PC version.

Unsurprisingly, the 980 Ti hands in exemplary performance at 1080p. We got an 83 average with the card, which played very nicely on our overclocked, 82 Hz monitor. Many would consider 980 Ti-class hardware as “overkill” for 1080p. From personal experience, it’s still a very relevant card at this resolution: it’s not terribly difficult to hit 1080p/60 FPS these days, particularly with cards like the RX 480 and GTX 1060 offering exactly that kind of performance at the $200 and $250 price-points respectively. But high framerate gaming is a whole other story: at 83 FPS, No Man’s Sky is noticeably smoother, to the point that your mouse almost feels like an extension of the in-game camera.

This is a transformative experience, but you really do need hardware this powerful to churn out consistently high framerates. We did notice some dips to the upper 60s and lower 70s with the 980 Ti at stock clocks. In real-world situations, however, we run this part with the obligatory 200 MHz Maxwell overclock, at which point we’re looking at framerates in the 90s.

At 1080p, the RX 480 hands in an very playable experience as well. While it’s not exactly a candidate for high framerate gaming, the RX 480 hands in a fairly consistent framerate in the low-50s, with the settings maxed out, offering a tangibly better experience than what’s available on the PlayStation 4. We did notice some hitching from some massive latency spikes, but that’s more down to the game than to the card. Toning down the settings (or perhaps just waiting for those incoming PC patches), could be enough to get a more or less consistent 60 FPS lock with the RX 480. 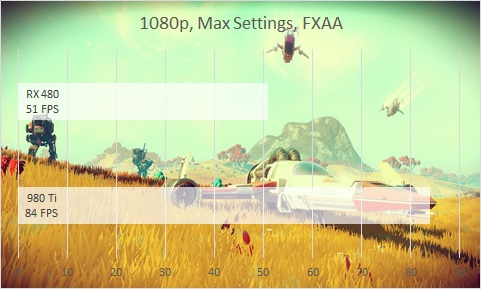 Marketing spiels notwithstanding, the original Titan X and the 980 Ti were really meant to be cards for 1440p/60, not 4K. At 1440p, the 980 Ti stays true to this promise, handing in a just about there 58 FPS update. With our regular overclock in place (never use a reference 980 Ti without slapping on a 200 MHz overclock, it’s just bad form), this could easily turn into a locked 60 experience.

At 1440p, the RX 480 scales remarkably well with a 39 FPS average. In terms of how the framerate is perceived, this is noticeably smoother than the PS4’s 30 FPS update, and from an image quality perspective, this is again noticeably better than what you’ll get on console. Moreover, considering how laid-back No Man’s Sky is, a 60 FPS lock isn’t going to do much for you in terms of general playability. 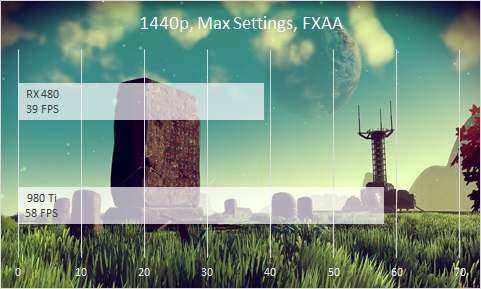 At the colossal resolution of 3840×2160, the 980 Ti continues to deliver, though just barely at stock clocks. We’re looking at a 32 FPS average here, with occasional drops below 30 FPS. At this point, capping at 30 FPS would offer console-style responsiveness, at four times the resolution. Not a bad deal at all. Throw in a hefty overclock, and you’ll see a day-and-night difference, however. With our core clock pushed up over 200 MHz, framerates shot up to the low 40s, making for a much smoother experience. While the 1070 may trump the 980 Ti at stock and from a raw power efficiency perspective, a heavily overclocked 980 Ti is nearly as fast as a 1080 at stock.

We really only ran the 480 at 4K for consistency. Unsurpringly at 21 FPS, it’s well below the 30 FPS playability threshold. If you’re willing drop your settings way down, you might be able to get it running at a playable framerate but really, you need a bit more horsepower to get this game running reasonably well at 4K. 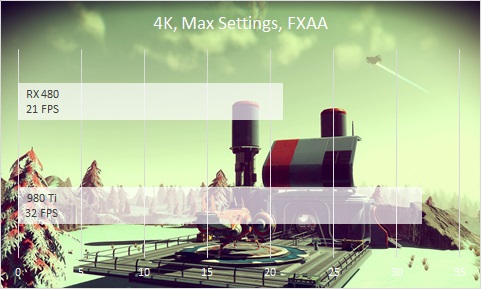 Considering what the rest of the internet (and a whole lot of angry Steam reviews) seems to be saying, we weren’t quite sure what to expect with our No Man’s Sky benchmarks. If performance was poor, it certainly wouldn’t be the first time our 980 Ti hit 1080p/30 FPS in a title (thank you Quantum Break). But we were delightfully surprised with how well both cards fared: The 980 Ti provides scope for a high-framerate experience at 1080p, especially if you’ve got one of those 144 Hz G-Sync monitors (or if you’ve just overclocked your cheap TN panel like we did), and the RX 480 very nearly hits 60 FPS here as well.

Moving up to 1440p with noticeably better image quality than the console iteration of the game, both cards continue to hand in a playable experience: An overclocked 980 Ti will net you a locked 1440p/60 FPS, while the much cheaper RX 480 delivers an eminently playable 39 FPS average. 4K is expectedly a bit too much for AMD’s budget champ, but the 980 Ti once again hands in a playable framerate. All in all, while it may not look great all the time, No Man’s Sky can certainly be breathtaking at times, and better ye, it scales fairly well across hardware configurations.