No Man’s Sky NEXT is an absolute looker on both consoles- with a few hiccups. 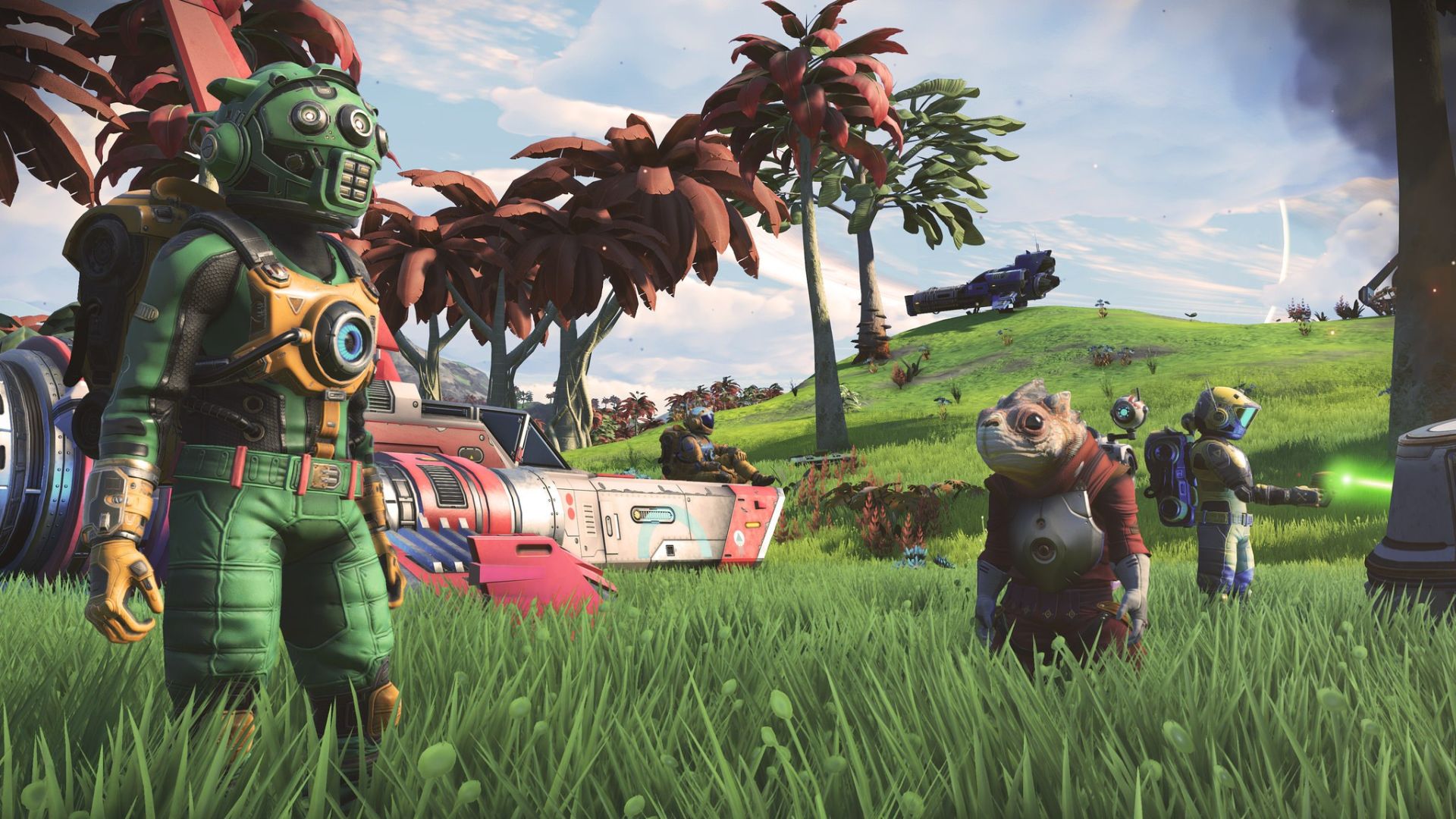 Of the many, many changes and additions No Man’s Sky NEXT brings with it to the base game, among the most noticeable have to be the visual upgrades. No Man’s Sky, even when it launched back in 2016, had some truly excellent and eye-popping art, but now it also has the tech to back that up- for the most part, at least. The third person view, which serves as the new default camera for the game, allows you to take in more of your surroundings, so anything you see is immediately more impactful, since there’s just, well, more stuff to see. At least in the very beginning stages of the game, landing on new planets and witnessing their strange new environments for the very first time can truly leave a lasting impression.

The new third person view also allows you to see your character model and, when you’re in flight, your starship. Thankfully, these models are quite well detailed. You could, of course, see your ship in the game’s earlier build as well, and viewed side by side, it’s easy to see that ships are just much more detailed, with a lot more visible parts, than they were in the original No Man’s Sky in 2016. Everything is also just much sharper. With better lighting and improved rendering, not to mention sharper textures, the overall quality of the visuals pops a lot more than it did in the past.

Lighting also works quite well in conjunction with the game’s weather effects to produce frequently beautiful results. At a distance, everything looks suitably crisp and beautiful- though it should be noted that up close, the game does begin to reveal some low resolution textures every now and then. Terrain looks much better than it did in the base game, thanks to improved procedural generation, and water surfaces also benefit from the significantly better assets the game uses.

Improved draw distances are also among the visual upgrades that come with NEXT. This is, of course, a game about scale, so better draw distances go a long way toward helping you take in the sheer largeness of your surroundings. And even though there are still a few instances of pop-in every now and then, they’re either in the distance or not all too frequent, so they don’t ever become too much of an issue.

As for the features specific to each of the platforms the game’s on- one of the notable things about this update is that it also spells the game’s debut on the Xbox One, coming pre-installed with the base game, and the Xbox One X version of the game is quite an impressive one. “Quality” and “performance” are the two modes the Xbox One X version of the game comes with, with the former focusing on resolution and the latter on frame-rate. Quality mode boasts native 4K resolutions, with the frame rate being 30 FPS. Though there are instances when the frame rate drops especially when you’re entering planets.

Performance mode, on the other hand, promises a frame-rate of 60 FPS, while running at a 1440p resolution. Even in this mode, though, the frame rate is far from stable at times. No Man’s Sky NEXT does allow you to turn on an option that caps the frame-rate at 30 FPS, so if you’re looking for a smoother and more consistent appearance, that is the way to go. On a 1080p TV, the game runs at 1080p resolution on the Xbox One X and targets 60fps and for the most part delivers that target with minimal frame rate drops.

On the PS4 Pro, frame-rate is much less of an issue. It, too, has two modes, and the performance mode that promises 60 FPS does so much more consistently than the Xbox One X. Sure, the resolution in this case is knocked down to 1080p instead of the One X’s 1440p, but there is little to no screen tearing, and very little frame-rate dips. An alternative mode targets 30 FPS at an 1800p resolution, and the frame rate here, too, is more stable than the One X’s quality mode- though, of course, the lack of native 4K resolutions is also obviously noticeable.

No Man’s Sky was a pretty beautiful game to begin with, but with NEXT, it becomes even more so. While there’s still a few visual bugs, and some occasional instances of distant pop in, the overall quality of the technical side of things has definitely been cranked up, while the art in general remains as eye popping as always. Native 4K resolutions on the Xbox One X are a bonus, of course, while the PS4 Pro’s more consistent frame-rates are also appreciated, so depending on whether you prefer performance or resolutions in a game, either one of those two versions could be more to your liking. But from a pure technical standpoint, the Xbox One X is quite clearly leading the chart here.