We have the results for the December 2012 NPD sales and Xbox 360 has sold 1.4 million, more than double of what the PS3 has done, but we don’t have PS3 numbers because I have no idea why Sony is being so secretive.

Microsoft had to gloat obviously, why wouldn’t they?

“Xbox 360 sold 1.4 million units in December – more than double the amount of the second place console in the U.S. in the month of December. This marks the 24th consecutive month Xbox 360 has held the number one spot in the U.S,” they said.

The entire industry was down by over 20% though and that’s not surprising due to the poor performance of the Wii U which did 450k.

Here’s what NPD had to say:

“A major culprit in the decline in retail sales in 2012 was the lack of new releases with 29% less SKUs across consoles, portables, and PCs,” he said in a statement.

“However, the SKUs that were released generated 8% more units per SKU and 11% more dollars per SKU.”

“While the Wii launch established new benchmarks in the United States, Wii U has surpassed its predecessor in perhaps the most important category: revenue generation,” said Scott Moffitt, Nintendo of America’s executive vice president of Sales & Marketing.

“The demand for the Deluxe SKU, which was essentially sold out at retail this holiday, and the strong attach rate of New Super Mario Bros. U, shows that we have the value and the games to drive momentum in 2013. We look forward to offering great new experiences and bringing smiles to millions of new faces throughout the year.” 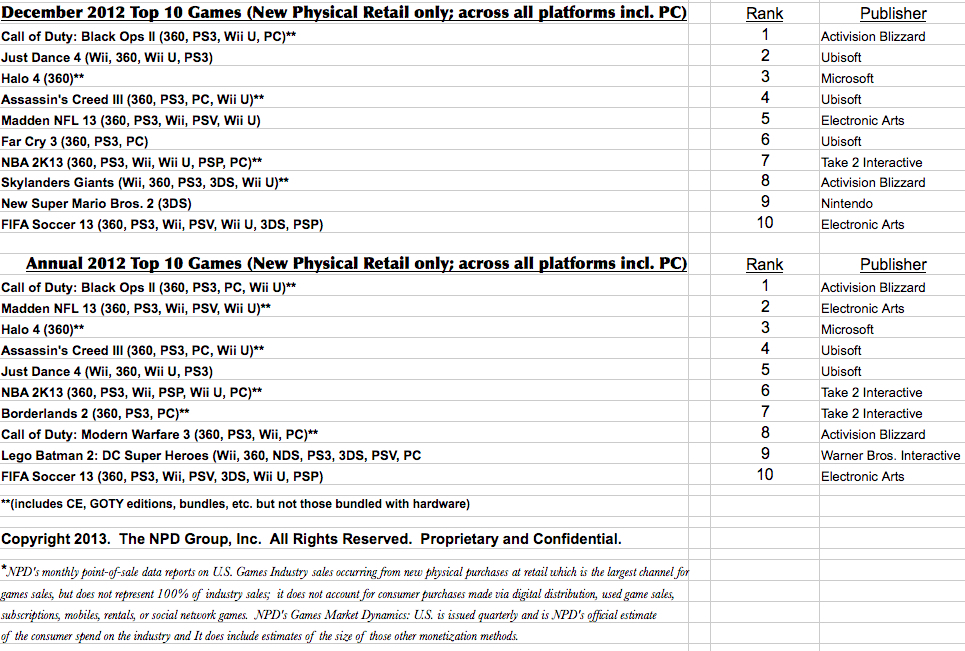