Not necessarily what many may have hoped for, but Tokyo 2020 makes a compelling case for itself nonetheless.

It’s unclear when the Olympics will actually happen – they’re currently scheduled for later this year, but they’ve gotten delayed enough times that there’s no telling whether or not they’ll actually stick to the date this time around. But whether or not the Olympics do end up happening when scheduled, SEGA has decided to no longer wait. Olympic Games Tokyo 2020, a new game by the publisher that was originally meant as a tie in to the sporting event originally scheduled for last year, is now available. SEGA, presumably, rightly feels that there is no point in waiting on the video game side of things, even if the actual athletic contest ends up never happening.

It’s a curious game to review, actually. Tokyo 2020 originally launched in Japan all the way back in June 2019 – so two years ago. So we’re not only reviewing a game here that’s meant to be a tie in for an already delayed event that may never happen, we are also effectively looking at something that’s been out for two years already. The world moved a lot in these last two years – especially in the video games industry, where an entire new generation of consoles launched in the interim, and player expectations for a new game are not necessarily what they were back when Tokyo 2020 first came out. 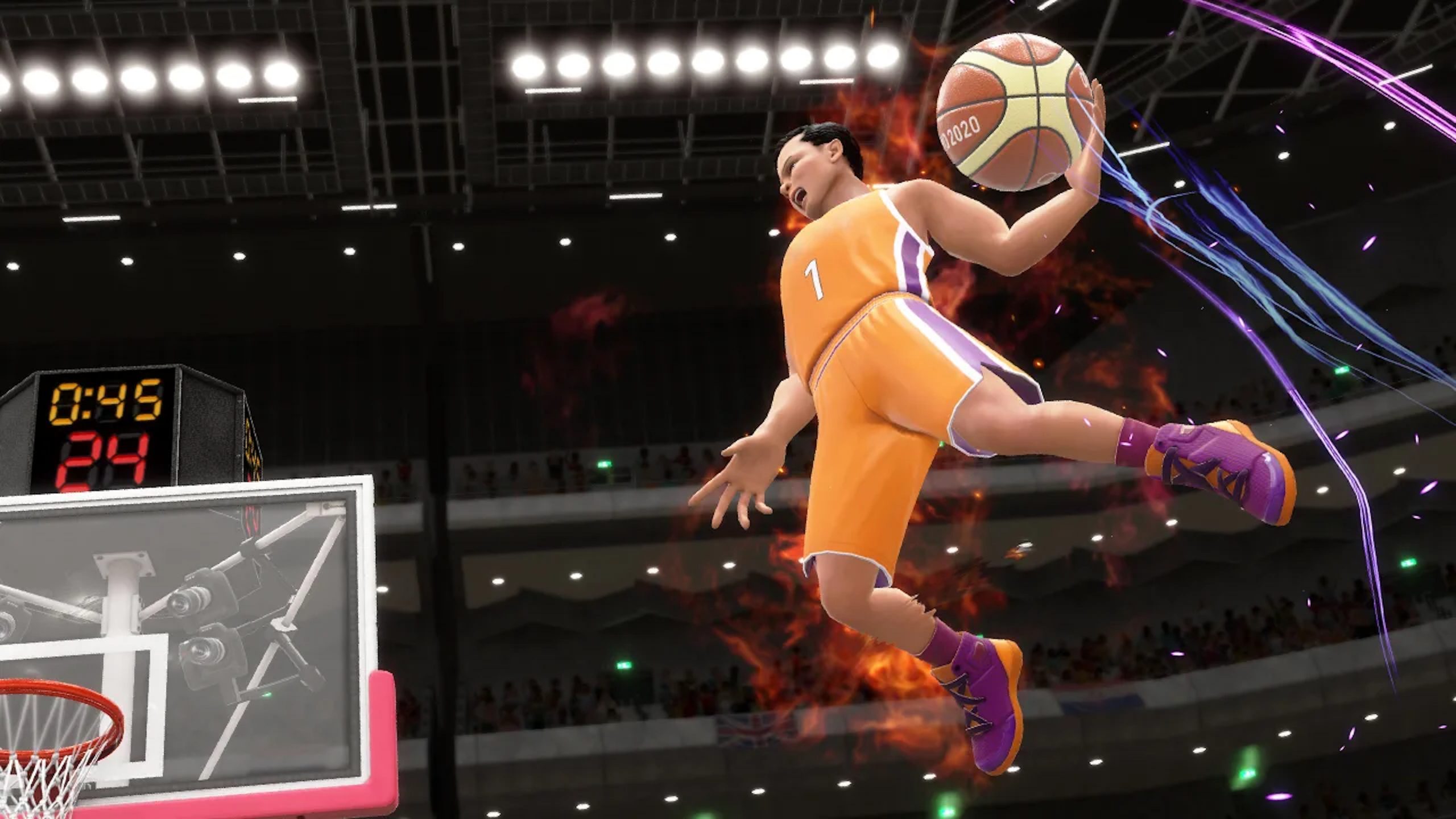 "Tokyo 2020 is a straightforward enough value proposition that pitches itself as a cheap game to families and fans of the Olympics, mostly, and promising an experience to accompany the sporting event."

The good thing is, Tokyo 2020 is a straightforward enough value proposition that a lot of these considerations simply don’t come into play. It’s pitching itself as a cheap game to families and fans of the Olympics, mostly, and promising an experience to accompany the sporting event. It’s not really positioning itself as a premium game, or as trying to recreate to any degree the authenticity or real world look of the Olympics – so not like the EA Sports games, for example. It’s a budget game that includes a lot of sporting events for you to play through that just happens to bear the Olympics branding.

What this means is that if you’re expecting the kind of high-end pizzaz and production qualities that, say, FIFA 21 has, you’re out of luck here. Unlike FIFA, it’s hard for anyone to confuse Tokyo 2020 for the real thing at a glance. It very distinctly looks gamey, and doesn’t try to include real world branding or presentation elements.

Also unlike FIFA, or NBA, or MLB, or mostly every other sports game on the market, Tokyo 2020 has to include multiple games within it – we’re talking judo and boxing and sports climbing, athletics, 100m sprints, tennis, table tennis, football, rugby, basketball, and actually a fair few more games. This means, by definition, that it cannot have any individual component playing as well as a more full-fledged, thoroughly developed game based on that component might be. In simpler words, while basketball in Tokyo 2020 is fun, you can’t come into it expecting it to match the depth of an NBA game, that only focuses on basketball, and can spend a lot of time and resources fleshing the basketball mechanics out. Tokyo 2020 has to spread its attention among several games.

If you are a diehard fan of that sport, this can almost feel disappointing, but it actually works for Tokyo 2020. Inasmuch as we are looking at this as a more casual offering, something for families to play together, or to pull out during parties, or even just something you’ve got for yourself to just dabble with, the lack of depth in each individual sport works well. It means the games are easier to explain, easier to understand, and easier to get into. You don’t have to spend 30 minutes explaining to the next person to get the controller that the goalkeeper AI responds to how you feint or the degree to which you press the trigger, just a basic understanding of the sport’s rules, as well as the game’s simplified control scheme, is enough to get the job done.

To the game’s credit, it seems to be explicitly designed around these kinds of use cases as well. Extremely simple (but thoroughly effective) prompts tutorializing the basic controls for a game show up the first time you start it up (and you can pull them up again whenever you want in between rounds of that game); controls, as mentioned, are extremely straightforward and intuitive, and require minimal inputs; even the look of the game, with an uncluttered UI free of the real world presentation trappings that so many other sport games go for, seems to be inviting for newer and less experienced players. 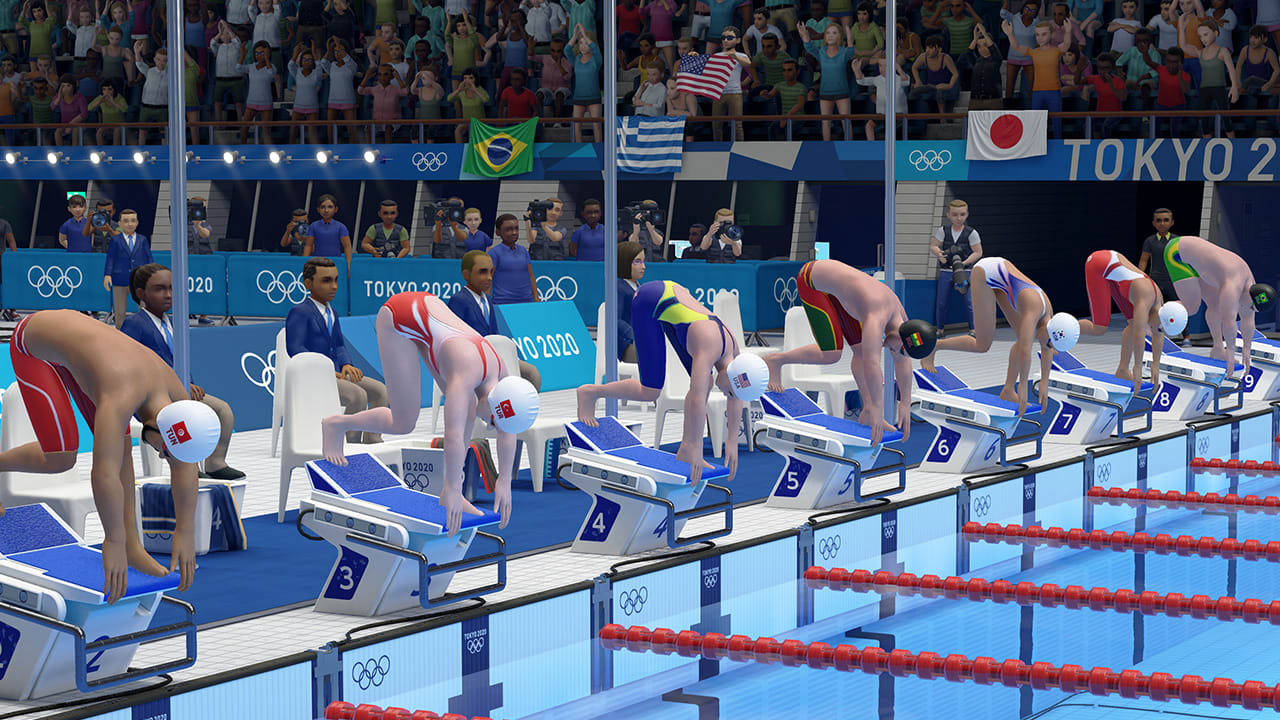 "Inasmuch as we are looking at this as a more casual offering, something for families to play together, or to pull out during parties, or even just something you’ve got for yourself to just dabble with, the lack of depth in each individual sport works well. It means the games are easier to explain, easier to understand, and easier to get into."

Of course, if you expected a deeper game that leaned into its official tie in trappings more, and strove to deliver an authentic recreation of the event like many other sports games on the market do, you would be disappointed. And to be fair, in and of itself, that’s not even an unreasonable expectation. This is actually the first “normal” Olympics game we have gotten in over a decade. Typically Sega puts out one each time there are Summer or Winter Olympics, but those are branded Mario and Sonic at the Olympics, and are pitched as family-friendly Olympic game offerings; with a Mario and Sonic edition for the 2020 games already existing, you wouldn’t be wrong for expecting that the more straightforwardly branded Tokyo 2020 would instead go for the more authentic, deeper companion piece to the event route that so many other sports games do. This is, however, very distinctly not that. It’s fine for what it is, but it’s very clearly mid-budget – you can see that with how it looks, you can figure that out with the limited number of canned commentary phrases, you can see that in the art style, the animation, the lack of real world branding, it’s everywhere, actually.

I don’t think that’s a bad thing at all (and the game, with its budget pricing, is upfront about this too). I think Tokyo 2020 is actually the most fun Olympic game we’ve gotten in a decade plus too, and I think it works far better as a more casual take than opting to be an authentic sim companion to the Olympics themselves. And I think the game’s easy controls, support for local and online multiplayer, uncluttered HUD and UI, and straightforward interpretations of most games included, work in its favor. While I understand the disappointment those looking for a more authentic or grounded take on the Olympics may feel, I think Tokyo 2020 works really well for what it is, and is a fun and involved party and multiplayer game that knows that sometimes, less really can be more.

Extremely simple and intuitive controls; very easy to pick up and play; built-in local and online multiplayer support across the board; extremely varied, with enough depth across all the included games to feel compelling

Lacks the authentic sim trappings a lot of fans may have expected from a new major sports title; each individual game lacks depth to be compelling over the long run; looks cute and pleasing, but is distinctly a mid-budget game

Final Verdict:
GOOD
Taken for what it is, Tokyo 2020 works well enough to carve a niche for itself as a surprisingly fun and easy to pick-up multiplayer game for families and parties.
A copy of this game was provided by Developer/Publisher/Distributor/PR Agency for review purposes. Click here to know more about our Reviews Policy.