For anyone not sick to death of shooting dead things, developer Laughing Jackal has been busy and added yet another title to the burgeoning world of zombie games. But this monochrome PlayStation Minis title is a little different. Rather than those run of the mill first- and third-person shooters that have taken over the gaming world almost as a zombie hoard would a shopping mall, this is a puzzler that will literally suck the life out of you – in a good way. 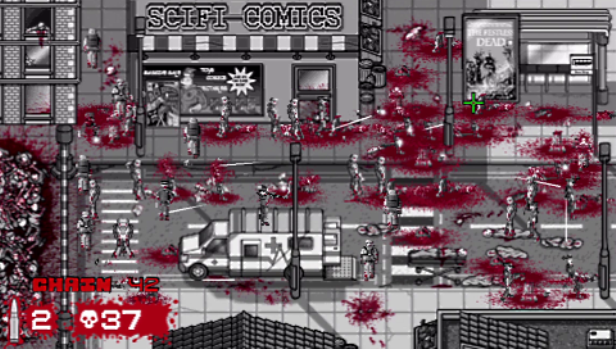 It’s really addictive shooting all those zombies. Just look at the carnage!

Addictive, tough and heavily reliant on luck, this chain reaction game is an absolute delight to play. The graphics are basic in the extreme, while the sound effects are restricted to trademark groans and the occasional gunshot but it really doesn’t matter. OMG-Z is simply huge amounts of fun.

The city of Redfield has been hit by an outbreak of the ravenous undead and you’ve been drafted in with your crack team of skilled shooters (armed with pathogen bullets) to clean the streets. But as luck would have it your colleagues quickly meet an untimely end and you’re left to your own devices, with very little ammo and a big task ahead. You’ve got to make those shots count, choosing the optimum targets to create a huge chain reaction and wipe out crowds of those foul-smelling bad guys. 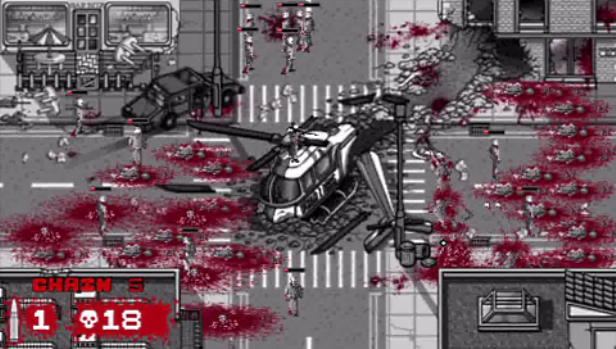 Shoot the various zombies to unleash a chain reaction

Spread over 81 levels with 32 different settings, it will take many hours to beat the game – and rest assured that you’ll keep coming back to try to improve your scores. There are three endings up for grabs and countless accolades to earn if you cause enough carnage. Each stage varies in difficulty (one being the easiest and five proving pretty much impossible), as well as the number and type of zombies that will appear.

It actually proves quite a relaxing, thoughtful game. The controls are ridiculously simple, basically requiring you to just move your gun reticule around the screen and take a shot at whichever zombie you think will do most damage.

There are several types of undead to aim for:  civilian zombies explode when hit  – causing others nearby to die too, bloated ones that have a greater blast radius, cops that fire a bullet when killed – shooting others in their line of sight, soldiers that unleash several bullets when targeted and last but not least, acid spewing zombies. Flammable barrels in some levels add another dynamic – setting fire to all in the vicinity and perfect for achieving a huge chain of kills!

Complete the level and you’re not only awarded a congratulatory medal – there are over 300 of these – but also a pile of cash that can be invested in the 70 different upgrades through the level select screen. These add a nice strategic element to the game… should you buy more ammo or increase the number of gun-wielding zombies??? 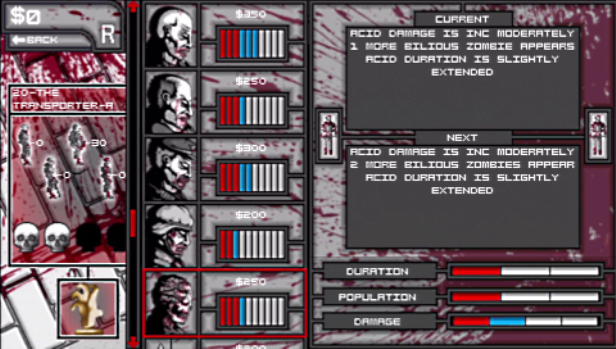 OMG-Z is the most fun I’ve had with a Minis game for some time and proves a refreshing twist on an increasingly overused theme. Whether you want to waste a few minutes or an entire evening, this is a fantastic game for a fantastic price. Highly recommended.

Great fun and there's plenty of replay value. A simple concept that's thoroughly entertaining. It's amazingly satisfying when you get a huge chain reaction and watch as zombies explode all around the screen.

Pretty awful graphics make it sometimes tough to differentiate between the various zombie types. The accuracy of your shots is sometimes way off, which can prove frustrating. Some levels are so damn tough.

Final Verdict:
SUPERB
More zombies? This Minis game just goes to prove you can never have too much of a good thing. Slow paced but so addictive and well worth buying.
A copy of this game was provided by Developer/Publisher/Distributor/PR Agency for review purposes. Click here to know more about our Reviews Policy.