One Piece: World Seeker provides a lot of enjoyable moments but falls short of its potential as an open-world game.

One Piece is one of the longest-running and most popular manga and anime franchises in history, with over 800 anime episodes and 900 manga chapters so far. The world’s eccentric characters and settings as well as its massively epic story have conceived generations of fans all over the world. And because of its popularity, it isn’t surprising that dozens of games based on the franchise have been produced over the past few decades.

One Piece: World Seeker is the latest action-adventure game based on the series from publisher Bandai Namco Entertainment and developer Ganbarion. It is the first open-world One Piece game released so far and one that doesn’t just retell the story of the anime/manga. In World Seeker, players once again take on the role of Monkey D. Luffy, the franchise’s main protagonist, as he’s joined by his crew the Straw Hat pirates. 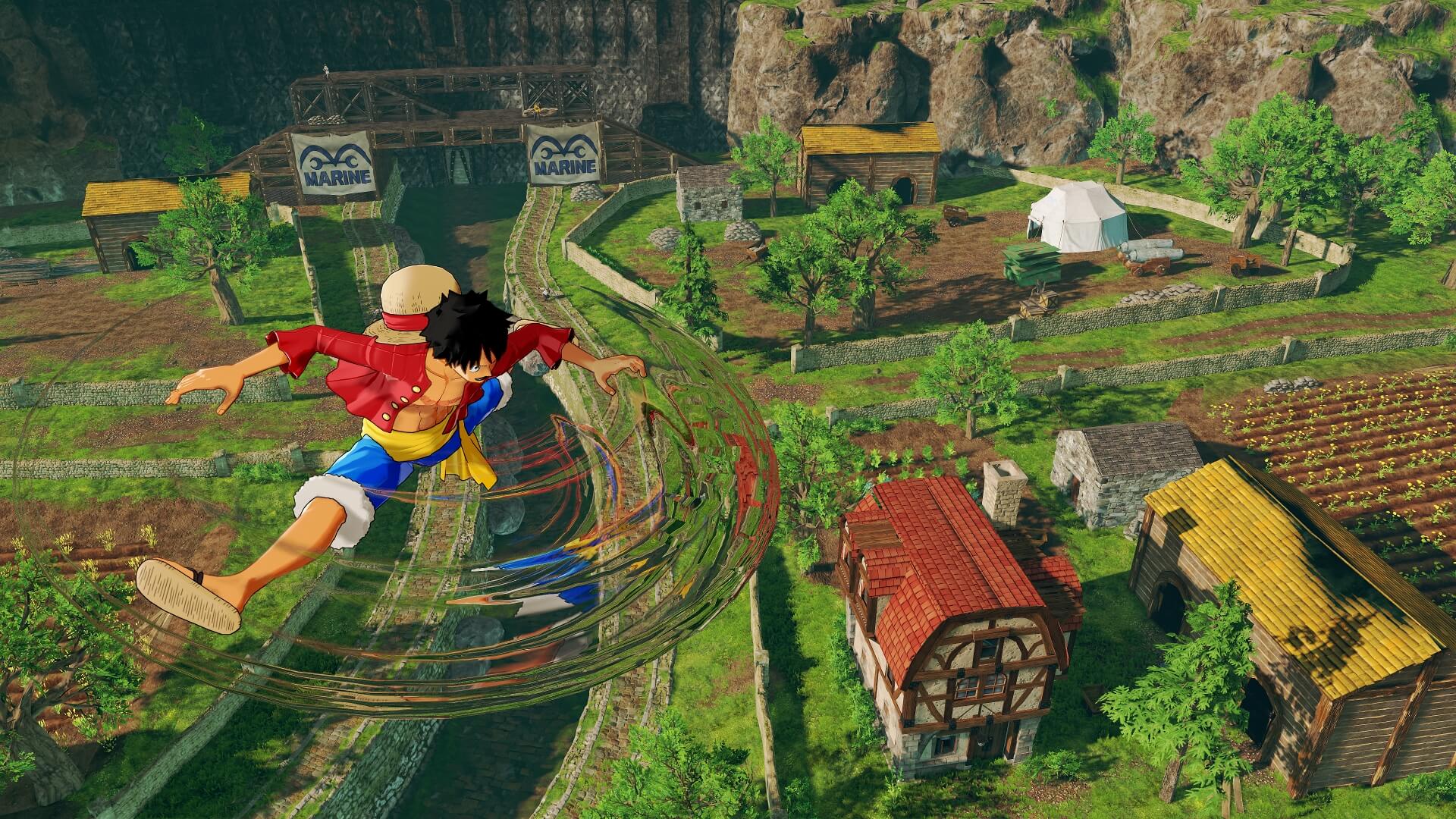 "Setting aside its issues with the source material, the story of World Seeker is still pretty interesting and feels almost like a genuine One Piece filler story. While there are moments when the story needlessly drags on, it does have a lot of great moments."

One Piece World Seeker features an original story and setting made just for the game. Series creator Eiichiro Oda supervised the story of World Seeker and even created two new characters for it. It takes place on Jail Island where Luffy must not only rescue his crewmates but also help the island’s inhabitants resolve a long-growing conflict and prevent another war for ownership and control of the island and its resources.

Apart from the entirety of the Straw Hat crew, World Seeker features quite a large number of recognizable faces from the One Piece universe, including Marines Akainu, Kizaru, Kuma, Tashigi, and Smoker; Sabo of the Revolutionary Army; CP-0’s Rob Lucci; and Ichiji, Niji, and Yonji from the Germa 66. Then there are the previously mentioned two new characters created by Oda for the game – Jeanne and Isaac.

But even while Oda was involved in the creation of the game, several of its elements easily conflict and are inconsistent with the manga’s story. Some of these include the game featuring outfits of the Straw Hat crew from older arcs while also featuring characters introduced in latter arcs of the anime/manga. There’s also the inclusion of Akainu and the expected and massive significance of him and Luffy meeting again that the game just brushes off.

Setting aside its issues with the source material, the story of World Seeker is still pretty interesting and feels almost like a genuine One Piece filler story. While there are moments when the story needlessly drags on, it does have a lot of great moments. The dialogue between Luffy and his crew as well as the game’s other characters are also reminiscent of the anime/manga and the flow of the story is decently enjoyable. 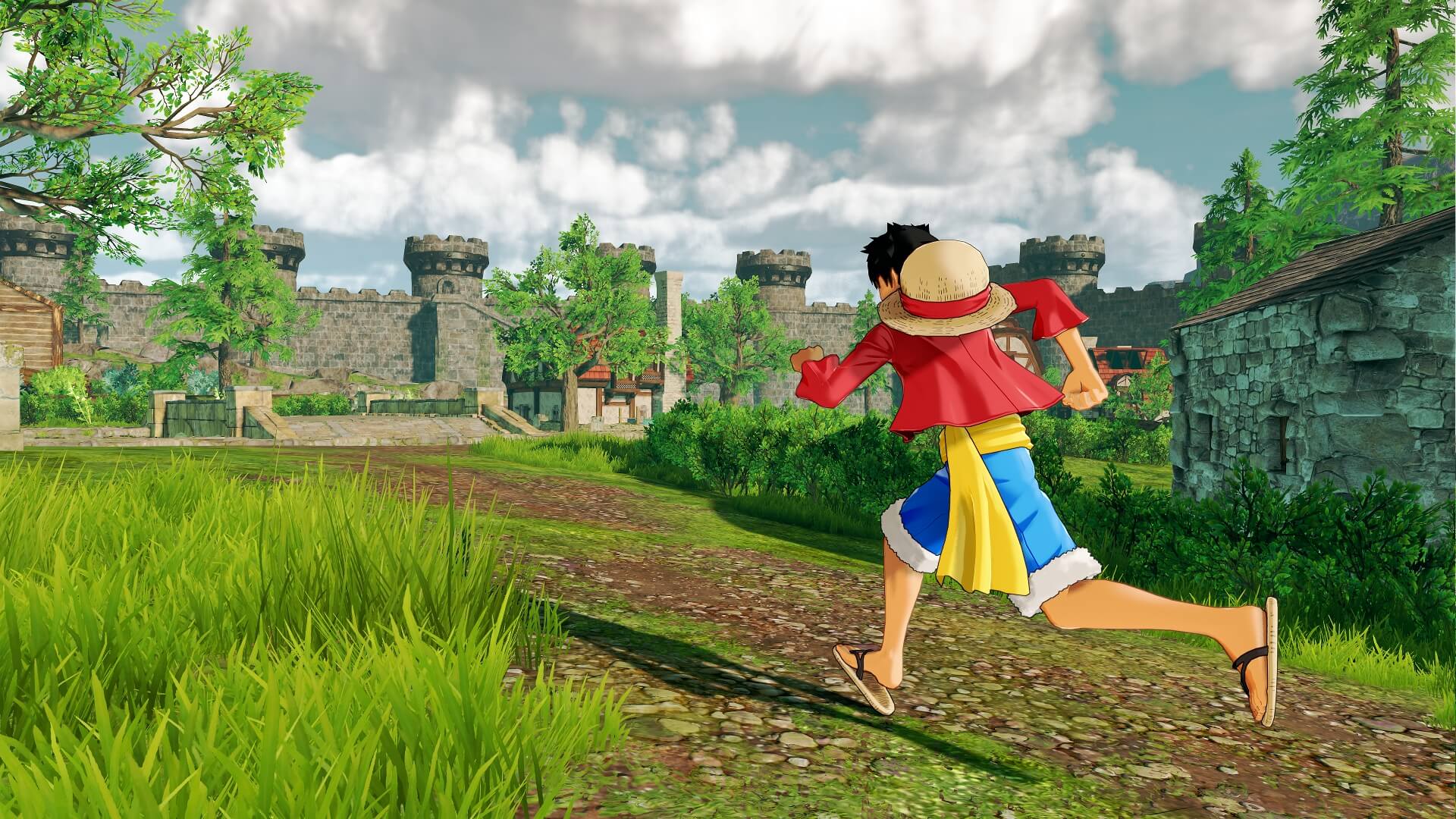 "While the character models are pretty well-executed, they just look out of place in the game’s world. The different locations in the game also look quite bland, generic, and not at all reminiscent of any location in the One Piece universe."

One Piece: World Seeker features cel-shaded character models placed in a traditionally 3D-modelled world as opposed to both being cel-shaded, which poses quite a dilemma for the game. While the character models are pretty well-executed, they just look out of place in the game’s world. The different locations in the game also look quite bland, generic, and not at all reminiscent of any location in the One Piece universe.

The game also doesn’t provide much variety when it comes to enemy character models as it reuses many of the models and only adjusts them slightly to make them look different. While it is expected that a game like World Seeker would end up reusing character models for generic enemies, a larger variety of designs would have been very appreciated. Nonetheless, character animations both in-game and during cutscenes are quite decent.

As previously mentioned, World Seeker is the first game in the series to feature open-world gameplay. Switching to an open-world style, as opposed to the linear style of some previous titles, allows not only the developers but also the players the freedom and opportunity to introduce and experience more of Luffy’s abilities outside of combat. It also allows players to tackle the game’s many challenges and missions differently depending on their playstyle.

Many of the game’s maps allow players to access missions from different angles and some missions let players either go all out and fight or use stealth to take down enemies one by one.

Players also have access to a skill tree that can unlock and upgrade Luffy’s abilities that range from different attacks and defensive moves, boosts to his HP and other stats, to abilities that help him move around and explore the environment. 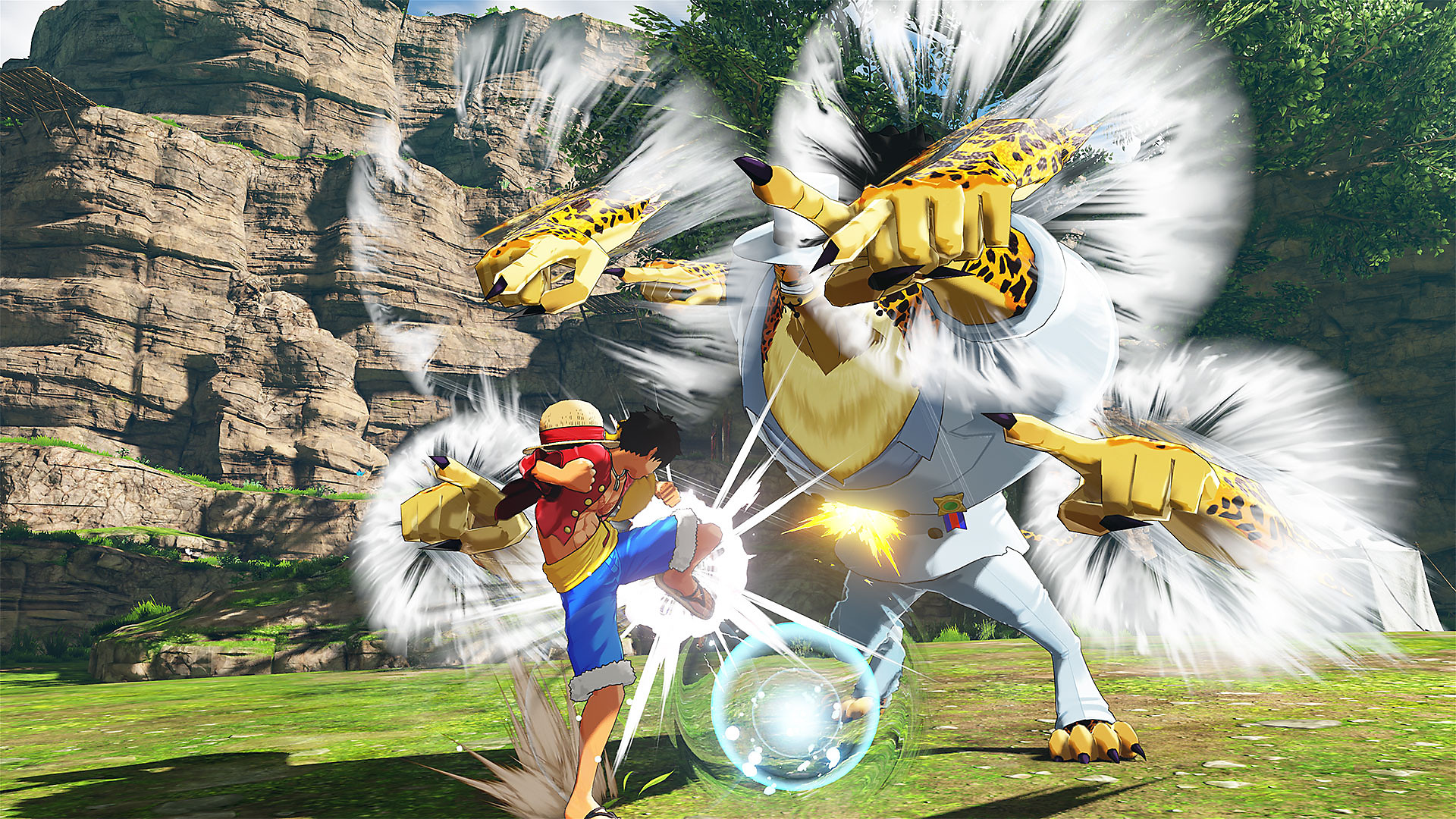 "While the game’s wide range of abilities make exploration and combat quite interesting and enjoyable, the combat does end up tending to be repetitive and tedious."

The game features several of Luffy’s abilities from the anime/manga and implements them in rather interesting ways. Luffy is able to switch between Observation Haki and Armament Haki modes, each giving him a different moveset and playstyle. Simply put, his Obvervation Haki mode gives him faster, single-target attacks as well as a dodge while Armament Haki equips him with slower, area-of-effect attacks and a block.

Luffy can also build up a Tension bar that can be used to unleash ultimate attacks such as his signature Red Hawk attack, activate Conqueror’s Haki, or transform into his Gear Fourth mode. The different modes and abilities the game gives players access fits its open-world style quite well and makes progressing into the game stay fresh as you unlock more. Lastly, the game also features equipment that can be crafted and equipped to increase Luffy’s attack or defense.

One of the most enjoyable parts of the gameplay is Luffy’s ability to extend his arms to reach out to ledges or trees and pull himself to them, which makes traversing the game’s world much more convenient and provides players access to different ways to travel around the map. The ability can also be upgraded to allow Luffy to slingshot himself into the sky and glide for a short time for even faster traveling.

While the game’s wide range of abilities make exploration and combat quite interesting and enjoyable, the combat does end up tending to be repetitive and tedious. Most of the fights, including some of the boss encounters, are also quite easy, which contributes to their tediousness. Making enemies more difficult and varied while also introducing more unique mechanics in the boss fights would have made combat enjoyable all throughout. 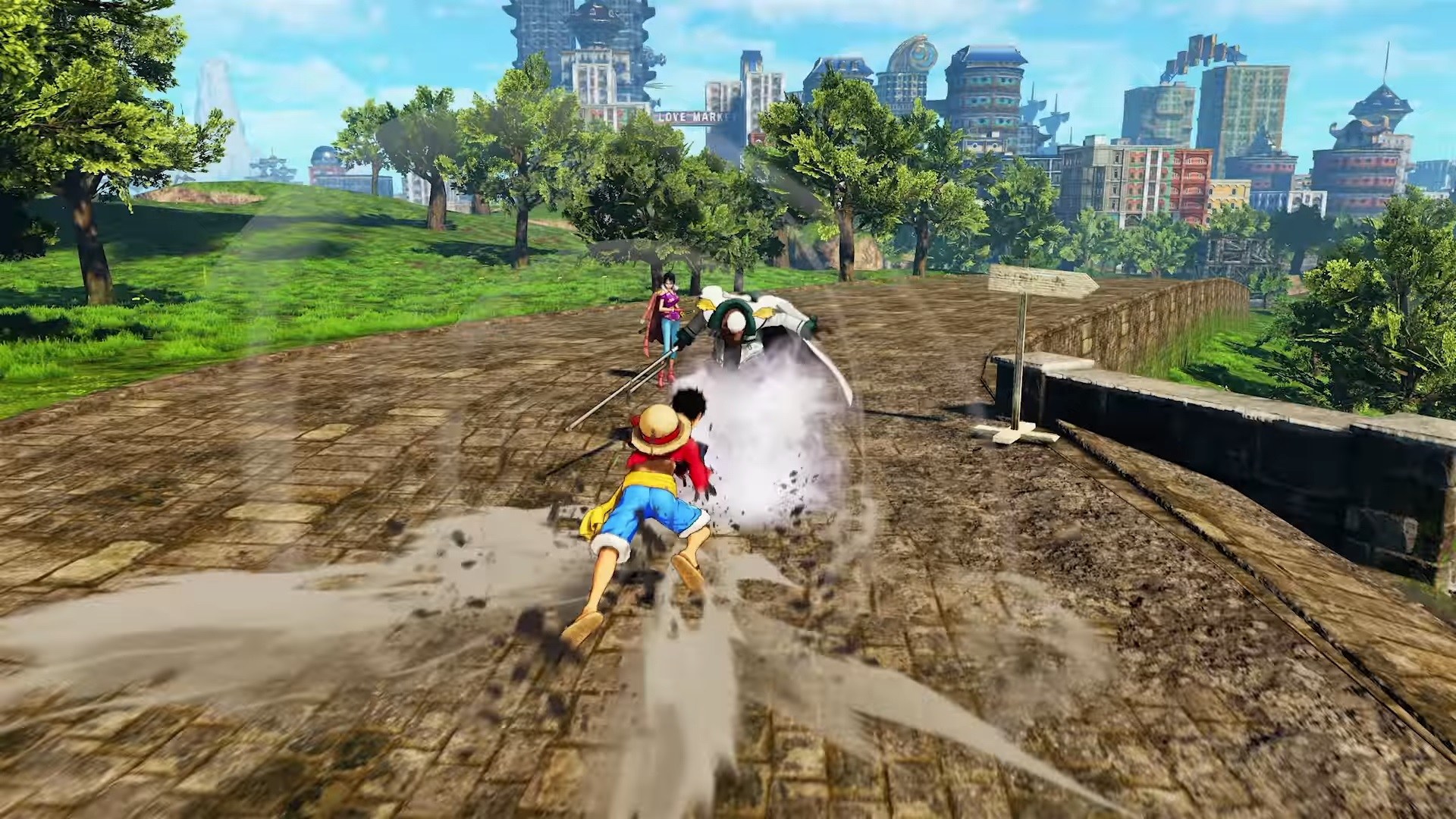 "There’s a lot to enjoy in One Piece: World Seeker, especially for fans of the series. But it’s also mired with the same faults of many other games in its genre."

Apart from the main story, World Seeker also expectedly features a large number of side missions and activities. Side missions can be discovered throughout the game’s world or from Luffy’s companions through its Karma social system. Sadly, the side missions are all rather generic and don’t really offer anything new in terms of gameplay. On the other hand, the side quests offered by Luffy’s companions may unlock additional cutscenes for players to experience.

There’s a lot to enjoy in One Piece: World Seeker, especially for fans of the series. But it’s also mired with the same faults of many other games in its genre. In spite of the One Piece franchise providing so much potential for design and gameplay, World Seeker still feels a lot like another generic anime/manga-based action-adventure game. But those who are able to forgive the tedium of its gameplay could still enjoy it a lot.

Wide range of abilities for combat and exploration; Interesting story.

One Piece: World Seeker could have been so much more that it is. While many of its elements were executed rather well and are still very enjoyable, many others feel uninspired and generic. Hopefully, Bandai Namco and Ganbarion learn from this first attempt at an open-world One Piece game and are able to improve on it in the future, as World Seeker has made it clear that One Piece would work very well as a large-scale open-world game.

A copy of this game was provided by developer/publisher for review purposes. Click here to know more about our Reviews Policy.
Tagged With: bandai namco, ganbarion, one piece: world seeker, pc, ps4, Xbox One