It’s hard to think of ay genre that has seen the kind of massive resurgence that metroidvanias have in the last few years, thanks in large part to the indie scene. Outbuddies is another metroidvania title coming out in the near future, and with its mixture of exploration, its unique setting, and curious mechanics, it’s looking like one to keep an eye on. Curious to know more about the game, we recently sent across some of our questions to its developer, Julian Laufer. You can read our interview below. 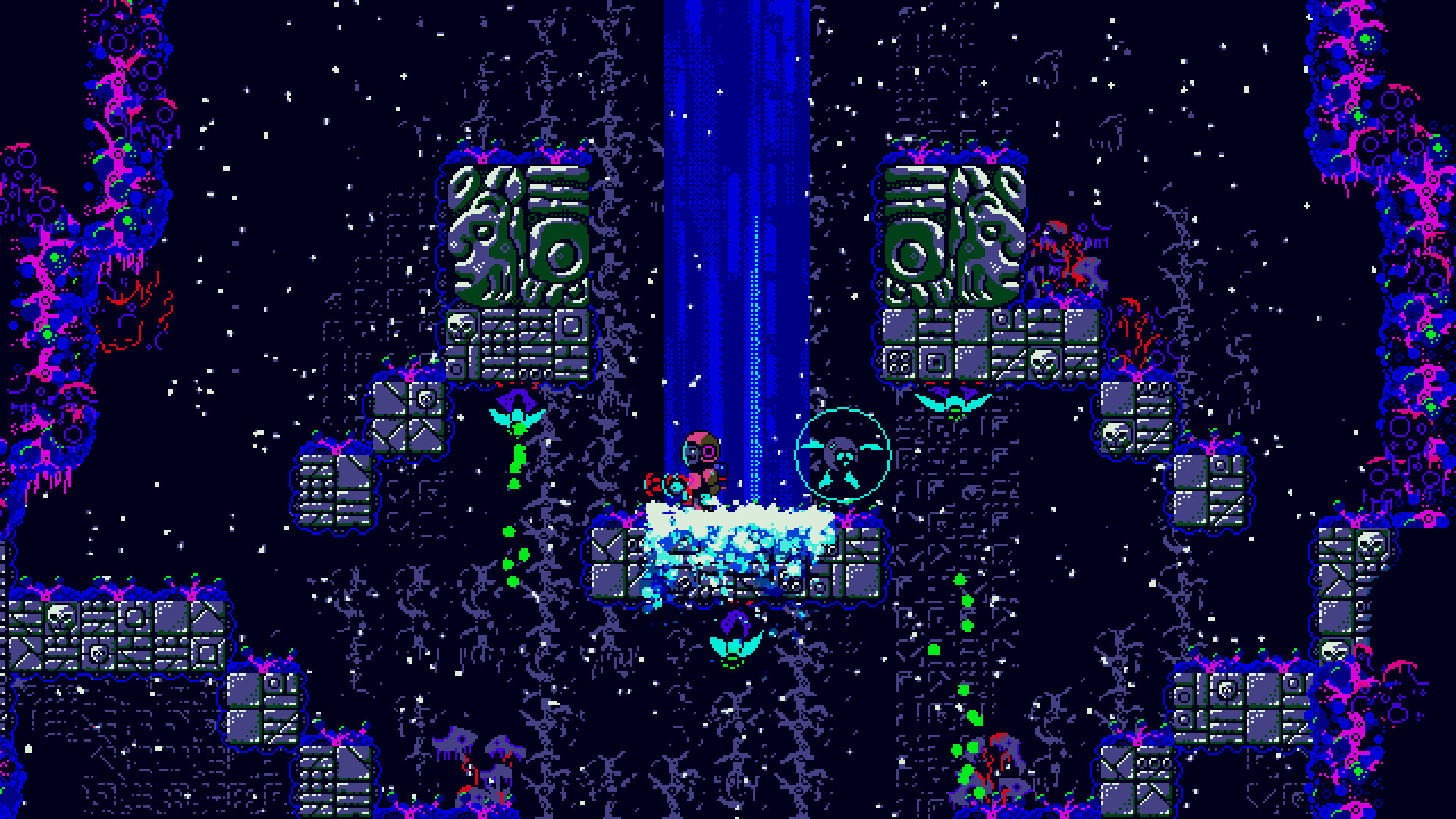 "Outbuddies’ backstory involves the fate of the Wozan, an enslaved folk of mining people, as well as your obscure role in a conspiracy, that were left behind to guard what remains of the sunken civilization."

The sunken city of Bahlam is looking like a very intriguing setting for the game. How much can we expect to learn about it and its history through the experience? Are lore and storytelling quite important in the game?

Something I else I wanted to talk about is- Metroidvania titles often adopt a more passing form of storytelling, told through item descriptions or vague dialogue or the environment itself- is that something Outbuddies is doing as well, or are you taking a more direct approach?

I’m the dialogue-skipper kind of player, so the game reflects that with a strong focus on environmental storytelling, using as little dialogue as possible to craft an intriguing world and memorable characters. You play as Nicolay Bernstein, a marine archaeologist and adventurer obsessed by the idea of an unknown alien civilization that suddenly vanished before the rise of ancient human high cultures. Outbuddies’ backstory involves the fate of the Wozan, an enslaved folk of mining people, as well as your obscure role in a conspiracy, that were left behind to guard what remains of the sunken civilization. There’s some dialogue in the game, especially in the village sections and before major boss encounters, but a lot of things will be left for the player’s imagination.

About how long is an average playthrough of Outbuddies?

Like with every MV, this will highly depend on playstyle and the player’s experience with the genre. Our beta testers needed around 15 – 20 hours to complete the game in their first run. A 100% run for me as the developer will be 7-8 hours. An unconventional thing for the genre to keep in mind is that Outbuddies has no throwback-penalty when dying; you instantly respawn in the current room without any major losses. On the other hand, it features a higher difficulty when it comes to bosses or platforming obstacles than usually seen in the genre. I’m curious about the speedrun-time though, we’ve no data here. 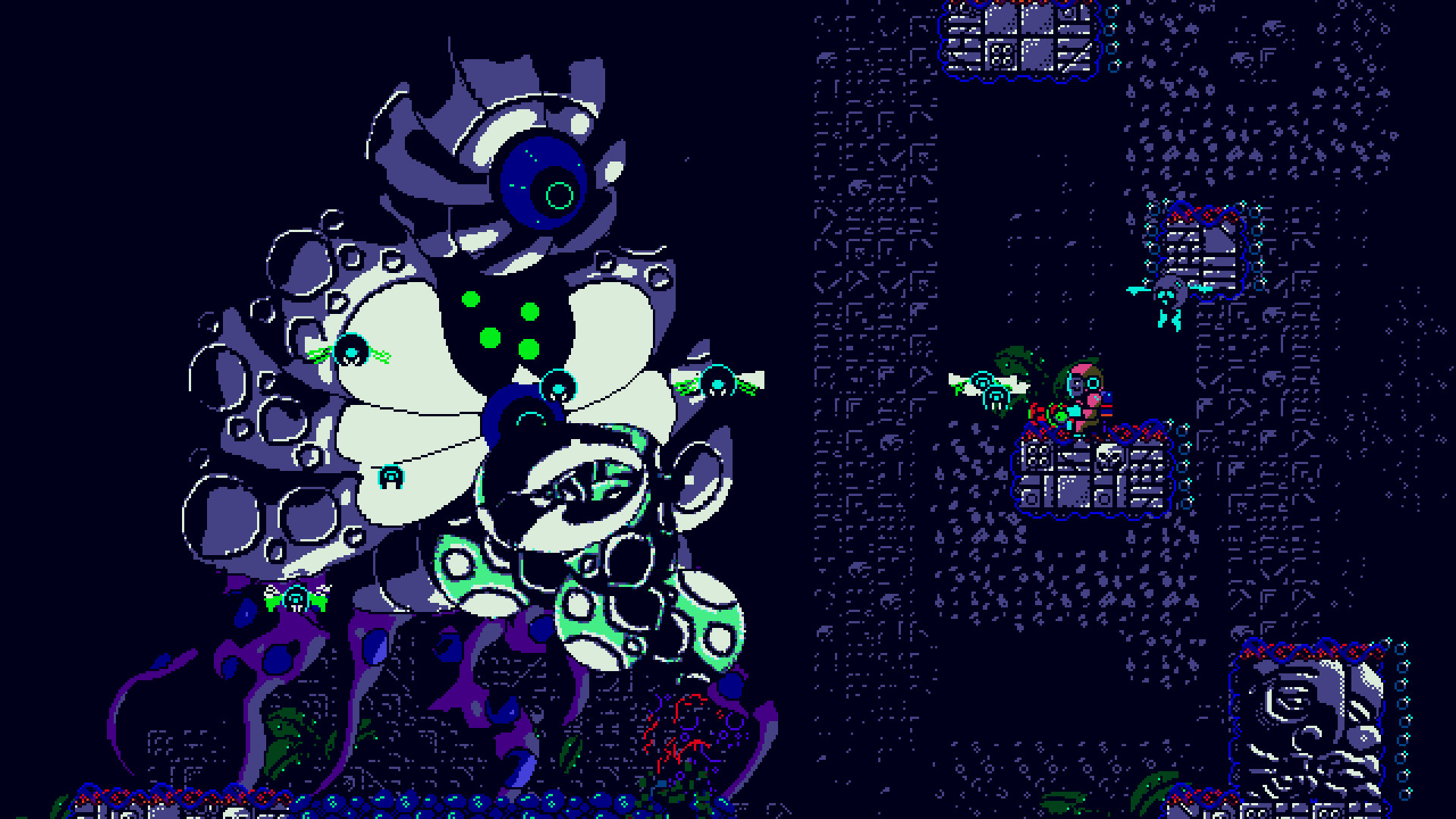 "The map size can be compared to titles like Super Metroid and Axiom Verge. The game has four main areas, all divided into two sub-areas, as well as various bridging zones and three Wozan colonies, where you can talk to NPC and gather some additional information about the game’s world. In general, Outbuddies follows a very classic MV design that is much more on the “Metroid” than on the “Vania” side of things."

Can you speak to us about the Buddy unit and its capabilities, and how those function in terms of gameplay mechanics?

At the beginning of the game, our main protagonist Nikolay is resurrected by the Buddy unit; a flying biomechanical droid that will stay hooked to Nikolay’s brain tissues and can be controlled at will. Buddy has three basic abilities: Scanning, Telekinesis and Hacking. Scanning is a QoL tool that helps to find secret pathways and provides icon-based clues how to interact with unknown objects and facilities. Telekinesis is used to move physical objects to modify platforming obstacles or even crush enemies. Hacking is an upgradable ability to modify enemy behavior or functionality to your advantage, a bit like the glitch ray in Axiom Verge. The idea of local co-op emerged around the Buddy droid leaving his gimmick-status behind and becoming a fully-fleshed character. Local co-op games were a big part of my childhood and I hope the experience will be valued by our players, providing a possibility of team-speedrunning as a new take on the scene.

Map design is something that can make or break a metroidvania title- what can players expect from Outbuddies’ map, in terms of both size and variety?

The map size can be compared to titles like Super Metroid and Axiom Verge. The game has four main areas, all divided into two sub-areas, as well as various bridging zones and three Wozan colonies, where you can talk to NPC and gather some additional information about the game’s world. In general, Outbuddies follows a very classic MV design that is much more on the “Metroid” than on the “Vania” side of things. Most of the areas are constructed as loops to minimize backtracking as much as possible. Also, some essential sequence breaks are possible to execute for experienced players and I implemented various secret pipes as well as portals that can be unlocked to speed up traversal a lot. Next to the essential part of finding crucial gear and weapon upgrades, you’ll be begged to rescue enslaved Wozan miners that are exploited by Bahlam’s hostile creatures.

How much variety can we expect in the design of enemies and bosses?

Outbuddies‘ nine bosses are very varied and will require strong reflexes, profound memorization of attack patterns, or even out-of-the-box thinking to stand a chance. I would consider the boss designs one of the strongest points of the game and on par with titles like Hollow Knight. Next to being an MV fanboy, I’m rooted in the 90s fighting game scene; I wanted every boss encounter to feel like an epic duel and something you cannot cheat around by simple exploits. Some MV protagonists tend to become quite overpowered towards the endgame, something I really wanted to avoid for Outbuddies. Leveling and grinding mechanics are skipped in total, even health tanks are missing, so players will have to rely on their bare skills and select gear wisely to overcome those challenges. Each biome offers a unique set of enemies that need to be approached in specific ways; the game even has an optional stealth system. Outbuddies uses ranged weapons, but the core loop also borrows from melee combat-focused titles like Hollow Knight and Dead Cells. Even standard enemies can be very aggressive and have multiple attack options, so statically shooting them likely won’t cut it. 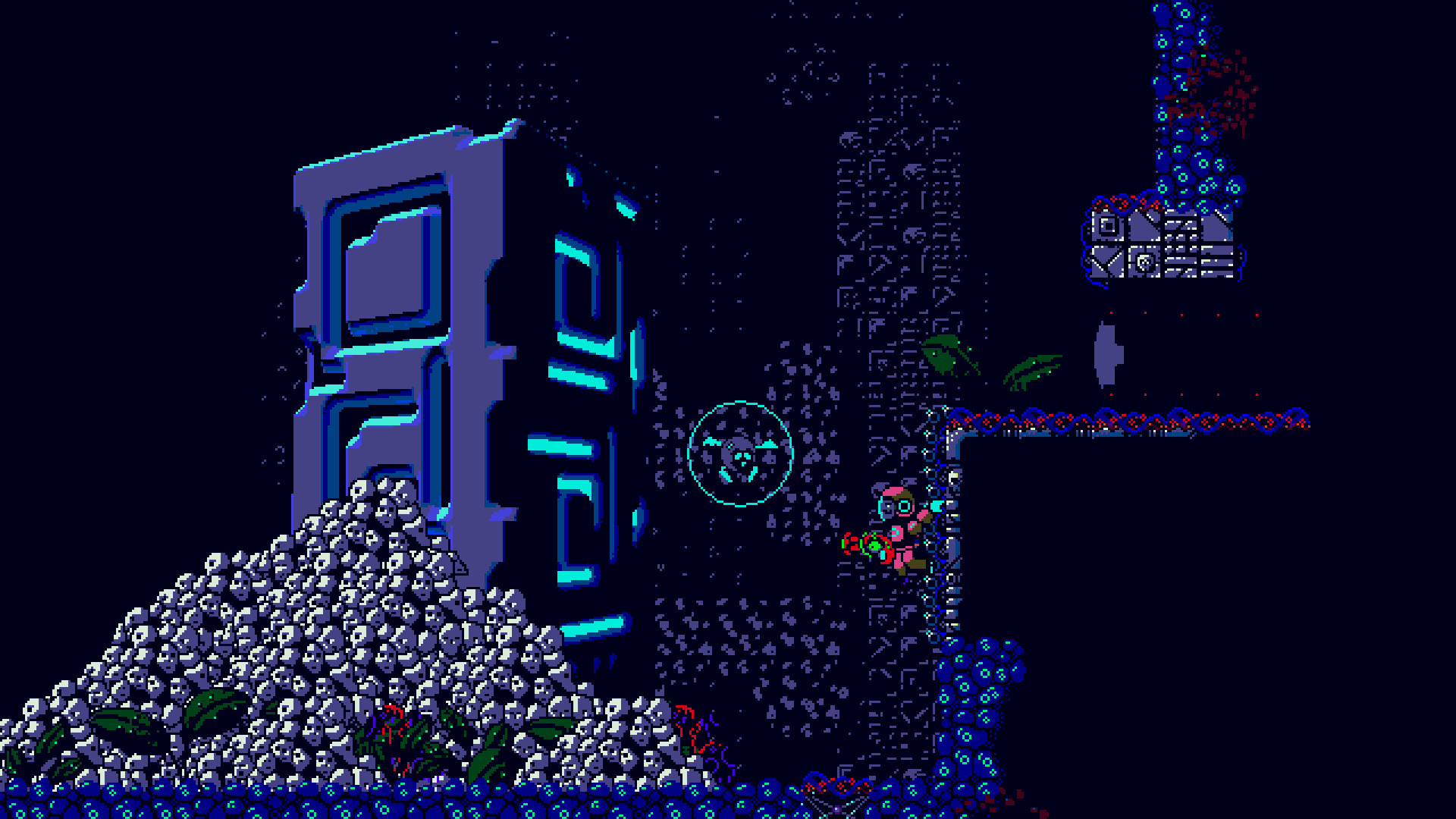 "I think platforming mechanics are, in general, not the strong point of the MV genre and many games tend to focus on RPG mechanics and lore. That’s quite different with Outbuddies. Bahlam can be explored with a high freedom of movement like climbing, wall-jumping, crawling and even diving right from the start."

Platforming is almost as vital in a metroidvania experience as exploration is- can you speak to us a bit about the platforming and traversal mechanics of Outbuddies?

I think platforming mechanics are, in general, not the strong point of the MV genre and many games tend to focus on RPG mechanics and lore. That’s quite different with Outbuddies. Bahlam can be explored with a high freedom of movement like climbing, wall-jumping, crawling and even diving right from the start. As you progress, your set of options will expand even more by discovering ancient weapon systems and suit upgrades. All gear was carefully balanced in terms of combat abilities and has to be used selectively to overcome specific hazards and puzzles. I put a lot of effort in the various movement abilities and combat interactions to make them feel natural and satisfying.

The metroidvania genre has seen a massive resurgence in recent years; thanks to the efforts of some excellent indie games- what is it about this genre that Outbuddies does differently, which will help it stand out to players?

Fortunately, we already see a significant interest in the title and feedback from our Beta-testers is hugely positive. Outbuddies has a special game-feel to it by delivering a certain Nintendo-fanboy cuteness paired with an edgy protagonist and a mature horror vibe. I think a Metroidvania should aim to foster the whole palette of human emotions by delivering daunting challenges, experiencing the wonder of exploration and making memorable NPC contacts at the same time. The core gameplay was crafted to live up to the standards of the genre’s most excellent titles and the unique Buddy-feature offers a nice touch without questioning the loved core elements of a classic MV title. I also hope having a title that is very close to the Metroid series is something many players will actually dig.